"Everyone is human, including Manny, and if I can put his name on the list of people I’ve beaten, it’s going to be a feather in my cap and catapult me to new heights in this division." - Cody Gibson 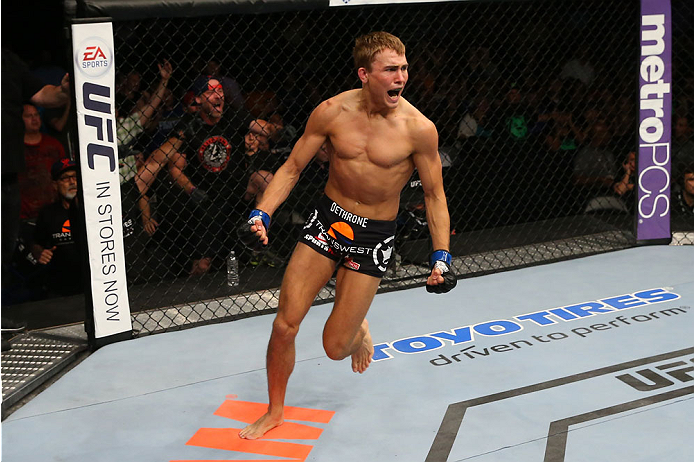 Getting the call to fight in the UFC is not only the culmination of a dream for every fighter, but it also serves as an opportunity for many of the newcomers to commit themselves to their craft full-time.

Ask competitors about their time climbing the ladder and gaining experience on the regional circuit, and you’re bound to hear about various jobs of necessity – flexible positions that provide supplemental income and enough free time to allow aspiring fighters the chance to keep pursuing their craft, but also put a couple dollars in their pocket at the same time.

Over the years, there have been a number of UFC competitors that spent their time outside of the Octagon inside the classroom teaching, including former middleweight champion Rich Franklin.

Cody Gibson was on that path as well, having served as a substitute for a time and spending last year working as a student-teacher, “which is basically a full-time teacher that doesn’t get paid because it’s the end of the credential program,” as he described it.

This year, however, the 27-year-old bantamweight won’t be spending any time in the classroom.

“I did some long-term substitute teaching and I was getting ready this year to start my first year as a full-time high school history teacher and I made a decision to pursue this full-time and not look back,” Gibson, who made his promotional debut on short notice opposite Aljamain Sterling back in February at UFC 170, explained.

“I don’t want to leave this sport with regrets that I didn’t have the time to train as hard as I want to train, learn as much as I want to learn and travel to different places to learn – all those things that encompass being a fighter and trying to grow as a fighter.”

And the Visalia, California native knows a thing or two about having regrets when it comes to his athletic pursuits.

When he arrived to high school as a five-foot tall, slightly chubby freshman, Gibson’s NBA dreams were dashed, and he turned his focus to wrestling, playing catch-up in a competitive state where many high school standouts first put on a singlet far earlier than their freshman year in high school.

Despite his late start, Gibson showed enough promise to land an opportunity at Bakersfield State College, where he went on to be a two-time junior college All-American before moving on to Menlo College, the same wrestling program that produced veteran lightweight Danny Castillo and current Ultimate Fighter favorite Carla Esparza.

“When I got to Menlo, I was more interested in playing Beer Pong and Flip Cup, having a good time, and didn’t really have my priorities in order,” Gibson, who carries a 12-4 record into his preliminary card matchup with Manny Gamburyan at UFC 178, admitted. “I’ll be honest with you, man – I beat up T.J. Dillashaw my freshman year of college wrestling. I was right there. I could have competed at the Division I level.

“Had I had all my ducks in a row, mentally and emotionally, I think I could have been a Division I All-American, but it wasn’t in the cards for me. It wasn’t there for me because I wasn’t mature enough. I was living on my own and didn’t really have any guidance.

“I was able to graduate from college, which I’m proud of, but I didn’t have things in order. When I graduated and I moved back home, I really had a lot of regrets. I knew I could have done some things differently and done a lot better representing my name and my family a lot better.”

He’s representing himself and his family quite well now.

Though he dropped his debut, many observers were impressed with Gibson’s performance against Sterling, as he took the hot prospect from the Serra-Longo Fight Team to a decision in a fight he accepted with less than two weeks to prepare.

Four months later – and with a full training camp under his belt – Gibson returned to the Octagon in San Antonio, scoring a first-round technical knockout win over Johnny Bedford in his sophomore appearance. Rather than getting to savor the sweet taste of victory, the controversial nature of the finish left him with a sour taste in his mouth, one he’s looking to do away with when he steps in against the veteran Gamburyan this weekend.

“It kind of feels like it was stolen from me, to be honest,” he said of the euphoric feeling that comes with winning your first UFC fight. “As soon as the ref ended the fight – well, he ended it twice – I didn’t realize at the time that it was controversial. I had that feeling that I think I was supposed to have – that organic feeling that I accomplished something that I’ve thought about for so long. I was running in circles, screaming with excitement, completely overwhelmed like so many fighters do, but then I saw Bedford and what was transpiring, and it all just kind of drained out of me.

“I would have much rather have gotten a clean knockout. I feel like something has been taken from me, so I’m looking to do it again – to prove any doubters wrong or anyone that said it was stopped early.

“I didn’t expect it to be honest with you,” he said of the opportunity to welcome Gamburyan to the bantamweight ranks. “I expected a guy with one or two UFC fights, kind of that “sink or swim” opportunity, but I’m fighting another Ultimate Fighter veteran and just feel fortunate to have another opportunity to prove to people what I can do.

“Manny is definitely the biggest name I’ve ever fought, but that doesn’t scare me or intimidate me though. Everyone is human, including Manny, and if I can put his name on the list of people I’ve beaten, it’s going to be a feather in my cap and catapult me to new heights in this division.”