Cody Gibson: Navigating the Good, the Bad and the Ugly 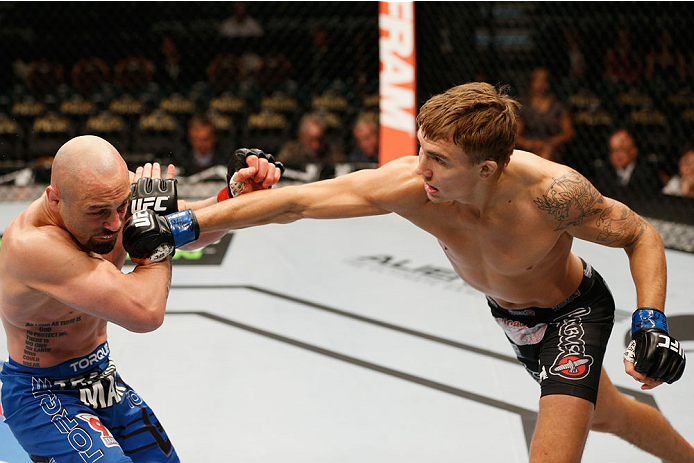 Anytime a UFC debut is involved, a fighter will mark that year as a notable one for his or her personal time capsule. Cody Gibson is no different in that regard, but when he looks back at 2014, he may see it as not just the start of his UFC career, but a year in which he saw it all when it comes to life in the big leagues.

“I don’t think I’ve seen it all, but I’ve definitely gained a lot of experience over the last year,” he laughs, but when I explain to him what I’ve seen him go through over that 12-month period, everything from going through a back-and-forth war, to winning a fight he was losing and losing a fight he was winning, to even a dose of the TMZ spotlight, he chuckles, admitting that yeah, he might have gotten more of an education than most UFC rookies.

“I definitely got a taste,” Gibson said. “I’ve had close fights, I had fights I was losing – the (Johnny) Bedford fight he hurt me pretty bad and I came back to knock him out. Then I had a fight where I was pretty much dominating and then I get caught. And out of the fight, I’ve seen the keyboard warriors and Twitter and had to go through that experience, so it’s been a year full of learning.”

When the dust settled, Gibson emerged with a 1-2 record, as he lost a close decision to fellow bantamweight prospect Aljamain Sterling, knocked out the veteran Bedford in 38 seconds, and then snatched defeat from the jaws of victory when he was submitted by Manvel Gamburyan. And while he got some unwanted attention from TMZ after an altercation in a bar after his UFC 178 bout against Gamburyan last September, as he prepares for his return to the Octagon this Sunday against Brazil’s Douglas Silva de Andrade, he feels like the education he picked up in 2014 will serve him well in 2015.

“You can’t beat the experience,” he said. “I’m used to being in the Octagon and used to all the things that lead up to the fight that you don’t see in the smaller shows, from traveling to doing everything the UFC needs you to do throughout the week, and having the crowd there. It’s like apples and oranges. But I’m just gaining experience and learning about myself, and in the gym, it’s just developing as a fighter. I’m still young and still getting better every day.”

The 27-year-old Blackwell, Oklahoma native, who now makes his home in Visalia, California, has also supplemented his education over the last year by talking to and training with fellow UFC fighters such as former foe Sterling, Joe Soto, Josh Koscheck, and members of the Alliance MMA squad. It’s in these sessions where Gibson has learned not just about techniques, but about life outside the Octagon.

“It’s great to just have that exposure of being around other fighters that are either in the same position in their career or guys like Josh Koscheck or Dominick Cruz who have really seen it all,” he said. “I pick their brain, ask questions and I try to wrap my head around the knowledge that they’re giving me. I feel like I’m peeling back an onion, and you’re learning more and more.

“Some of it’s learning through experience, and some of it’s avoiding those experiences,” Gibson continues. “I come from a small town and I love my coaches and the people I train with here. Luckily, I’ve also got Joe (Soto), he’s only about 45 minutes away and Koscheck’s about 45 minutes north, so I visit him often as well. But a lot of it has been trial and error. I didn’t come out of Jackson’s or AKA or Alpha Male or any of these camps where there was this blueprint written out for me of how to go about all this. The first five, six years of my career, it was definitely learning as I go, and now that I am starting to branch out and train with some experienced veterans, I’m learning a lot.”

One of those things he’s learned is that on fight night, you can never truly know what to expect, so you’d better be ready for everything. That’s especially true this Sunday in Porto Alegre, when he faces an opponent in Silva de Andrade who has a stellar 22-1, 1 NC record, but who also has very little footage available on the internet.

“It is a little difficult (to get a read on Silva de Andrade), because the one thing I haven’t seen is anything on the ground,” Gibson said. “All the YouTube footage I could find and the one UFC fight that he’s had, there are very little ground exchanges; it’s all stand-up. So if my game plan is to go in there and take him down, I don’t know what I’m getting myself into. (Laughs) We’re gonna find out when we fight because there are some question marks there.”

So to compensate, Gibson will make sure all his tools are sharpened and ready for battle. If that’s the case, then whatever his opponent throws at him, he’ll have an answer. That’s the sign of a veteran fighter, and after last year, Gibson is ready to prove that he’s just that – a veteran.

“It would have been great to go 3-0 and avoid the TMZ stuff and all that, but I can’t really say I regret anything if it’s going to make me a better person and a better fighter moving forward,” he said. “So I’m excited. I feel like it’s a fresh start. I feel like I’m better than I’ve performed, or at least I’m beginning to believe that, and I think I can really make a run at it.”