Cody Garbrandt Uses Fashion To Help Express His Personality And To Let The Confidence Flow When It's Time To Fight.
By Gavin Porter, On Twitter @PorterUFCNews • May. 19, 2021

Since joining the UFC in 2015, Cody Garbrandt has become one of the biggest stars in the sport. The former bantamweight champion has rightfully earned a reputation for delivering fireworks inside the Octagon, knocking out opponents in five of his seven UFC victories.

Garbrandt’s latest masterpiece came in the form of a buzzer beater KO of the Year candidate against Raphael Assuncao. The win was an important one for “No Love,” who entered the bout on a three-fight skid.

With his confidence renewed and firm ground beneath his feet, Garbrandt is in an excellent position to put himself right back in title contention this Saturday with a big win over the surging Rob Font.

Yet one of Garbrandt’s secrets to success has nothing to do with training or even with the fight itself - it’s all about what he’s wearing. 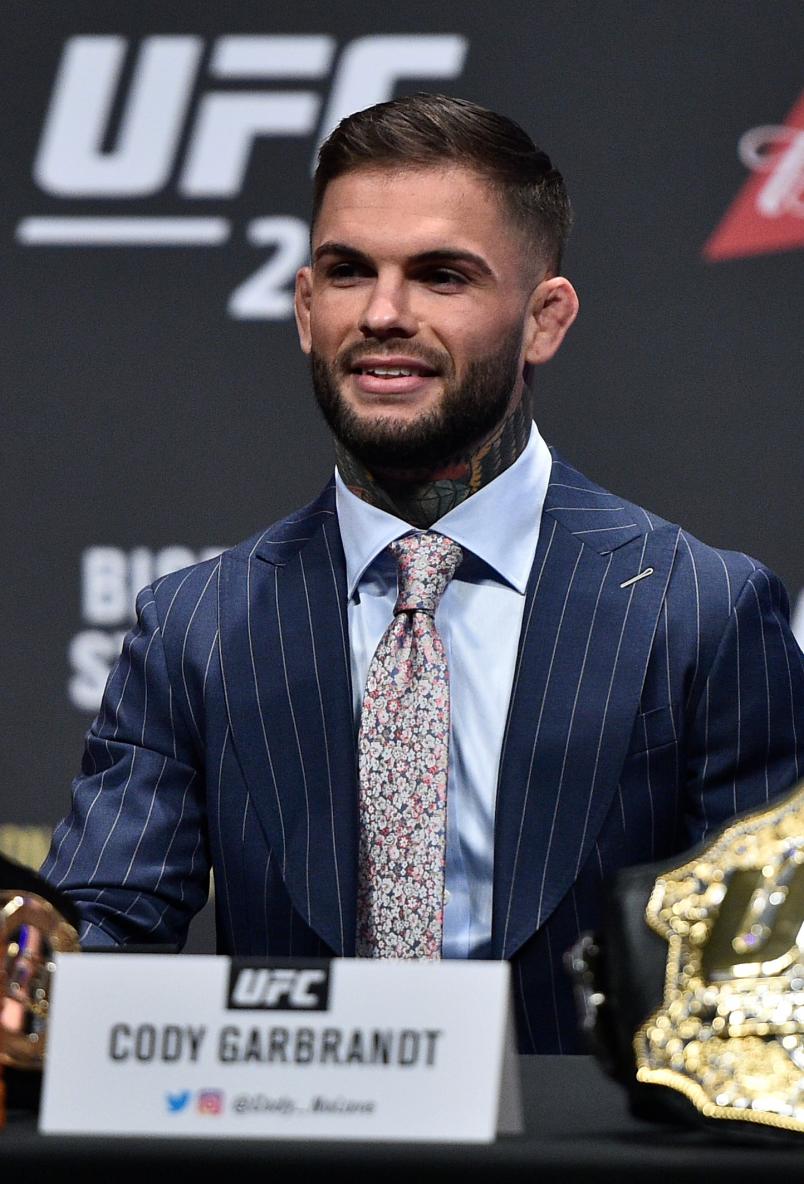 Cody Garbrandt interacts with fans and media during the UFC 217 news conference inside T-Mobile Arena on October 6, 2017 in Las Vegas, Nevada. (Photo by Jeff Bottari/Zuffa LLC

“It’s always been like that. It’s look good, feel good, then fight good,” Garbrandt told UFC.com. “It goes back to my wrestling days. I would always have the double socks just to have a little something different, a little swagger that set me apart from the other kids on the mat.”

Garbrandt definitely brought that swagger into the UFC, often donning designer outfits and three-piece suits to press conferences. Over the years he’s added to his wardrobe and he believes that his style has evolved as he has grown as a person and a fighter. Garbrandt thinks a majority of his fans like his style, and while he knows he’s going to have some haters, he won’t let their opinions get to him.

He admits that when he first started getting into fashion he wouldn’t take as many risks, but as he became more comfortable with himself, he was willing to be bolder with his look.

“When it came down to it, I wanted to be a guy that had his own style and that looked good and translated it into a good performance,” Garbrandt said. “I think that self-love and self-care are so important for everyone, not just fighters. Having confidence in my look helps me believe in myself and that’s when I go out there and perform like I should. My style shows that I have passion and that I’m not afraid to be me. When you’re wearing something perfect, it gives you that ‘it ’factor.” 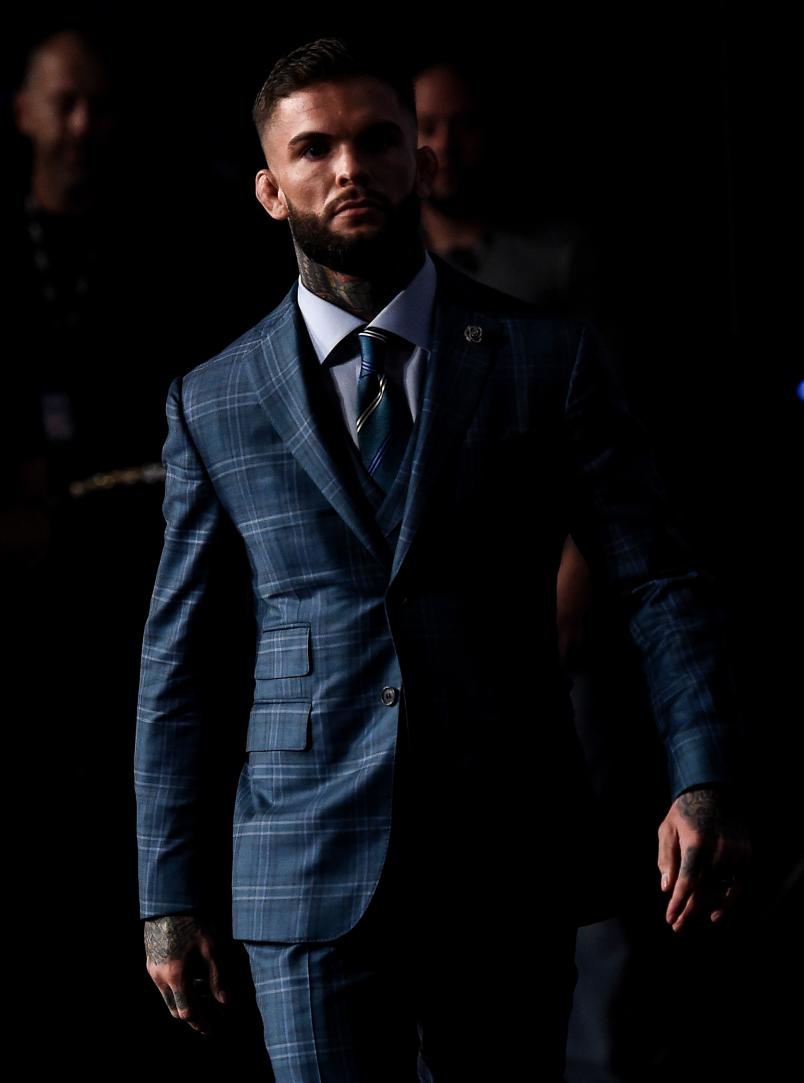 Cody Garbrandt walks onto the stage during the UFC 217 Press Conference inside Madison Square Garden on November 2, 2017 in New York City. (Photo by Brandon Magnus/Zuffa LLC)

That’s Garbrandt’s biggest advice to anyone looking to up their style – be yourself.

“If you’re getting into fashion you have to be bold and have the confidence to walk in a room and turn heads,” Garbrandt said. “You can wear bold stuff and can’t be afraid to have all kinds of looks. You have to have confidence in everything in life, but especially in fashion. So, take the risks, be yourself and own everything you put on. Your wardrobe is part of your personality, so don’t be afraid to be you.”

While it may not be a fancy suit or a colorful shirt, one new item that Garbrandt is excited to add to his wardrobe this week is his brand-new Venom fight kit.

“I like it a lot, the way it looks on the fighters. Venom gear kicks it up a notch, especially with the jerseys and the shorts design,” Garbrandt said. “Reebok did a good job, but I remember fighting in Venom fight gear like 10 years ago and it’s kind of cool to see them come back to the front of the fight world. It’s a fighter brand and it’s definitely a good look.” 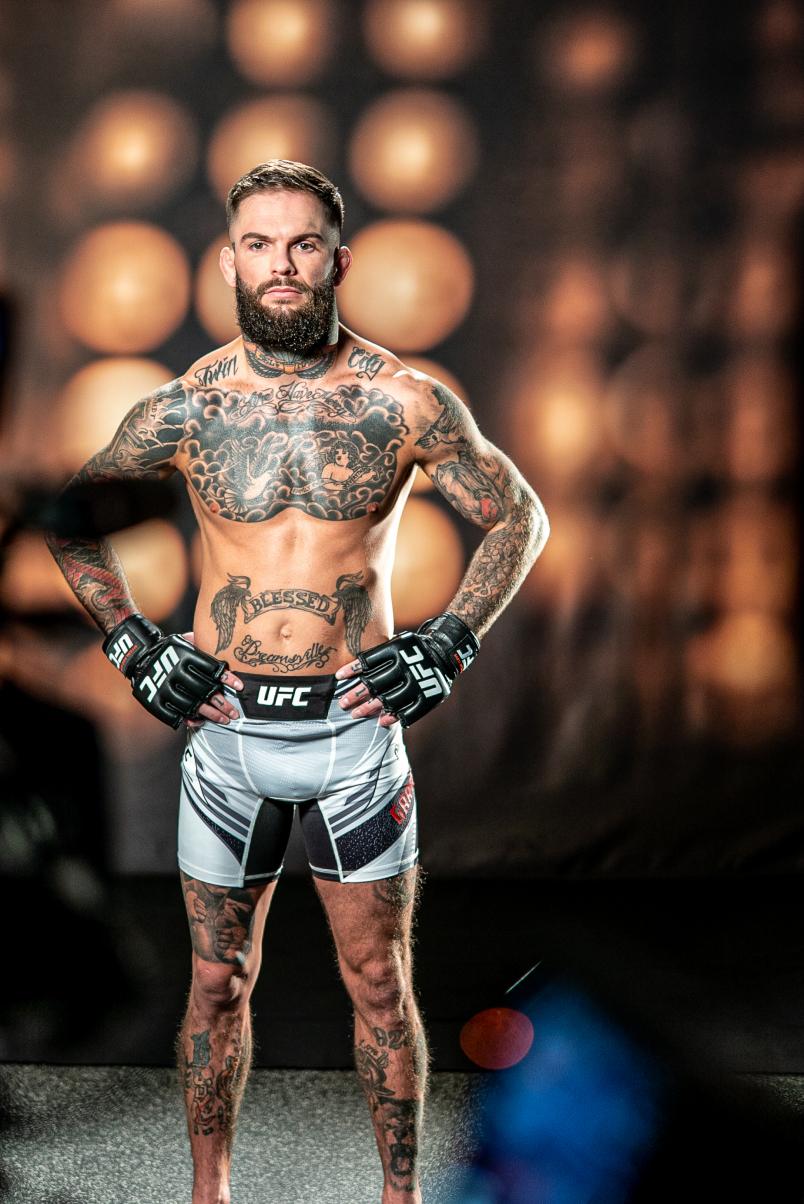 Cody Garbrandt poses for a picture ahead of UFC Fight Night: Font Vs. Garbrandt on May 19, 2021 (photo by Nolan Walker/Zuffa LLC)

Here are three of Garbrandt’s favorite outfits that fans might recognize from UFC events: 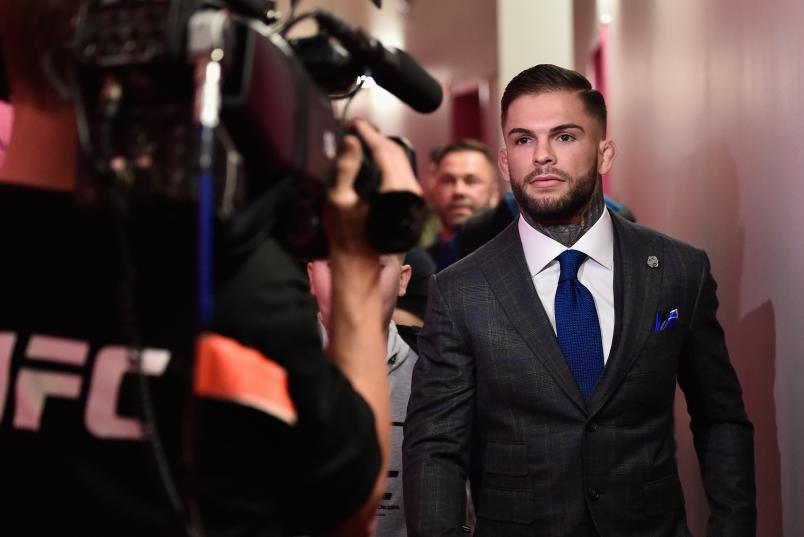 Cody Garbrandt enters the arena during the UFC 207 event at T-Mobile Arena on December 30, 2016 in Las Vegas, Nevada

“Man, the suit from the Cruz fight was really cool. I loved the shape of it. It was a three-piece suit that had an inside lining with skulls on it,” Garbrandt said. “I initially wanted to be a little bit flashier, but I decided to go with a classier look with the lapels. The tie really went off with the blue stitching of the suit and made it pop. It fit me in the moment. On the back of the collar, I had ‘And New’ stitched into it. That was the first time I had ever used some sort of signature saying or initials. I didn’t even think about it, but I manifested that I would be champ with that suit.” 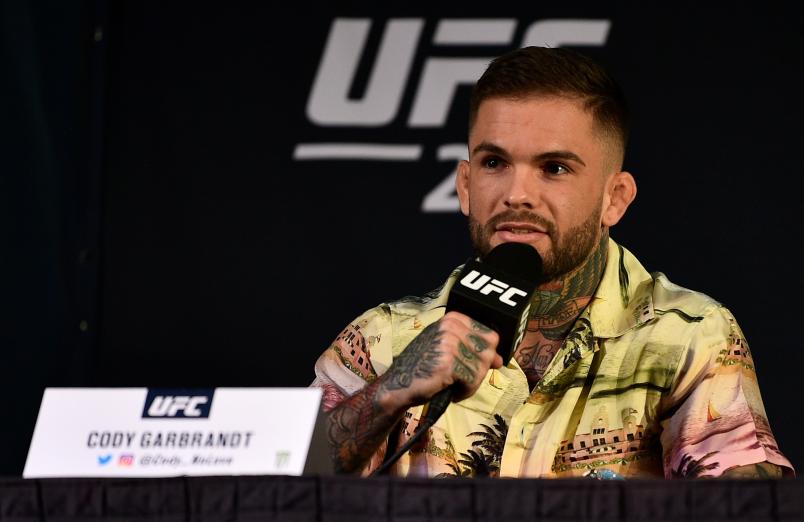 Cody Garbrandt speaks to the media during the UFC 235 Press Conference inside the David Copperfield Theater at MGM Grand on January 31, 2019 in Las Vegas, Nevada. (Photo by Chris Unger/Zuffa LLC)

“I’ve been following Mike Amiri for a long time. He is one of my favorite designers and his vibe fits me perfectly. I love his style and it’s cool that he’s a mutual fan of my work, so he’ll send me a care package,” Garbrandt said. “He’s one of those guys I can work with and he’s just different. There are a lot of people in the fashion game but it’s hard to have a signature look and he has that.” 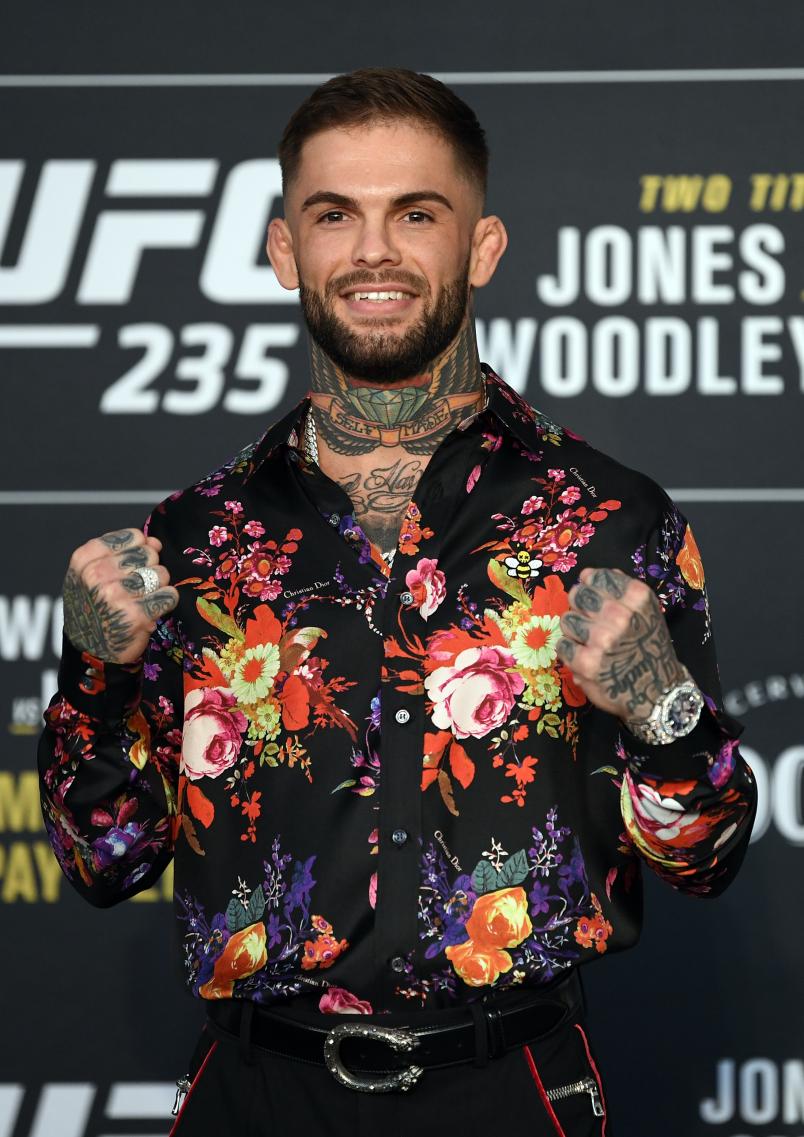 Cody Garbrandt poses for the media during the UFC 235 Ultimate Media Day at T-Mobile Arena on February 27, 2019 in Las Vegas, Nevada. (Photo by Jeff Bottari/Zuffa LLC)

“I just liked this one. It was very loud, and the pants were loud too. I just really liked how it felt with the silk; it was free flowing and perfect for March weather in Vegas,” Garbrandt said. “That’s, for sure, one of my favorites.”