Cody Garbrandt: Another Alpha Arrives in the Octagon 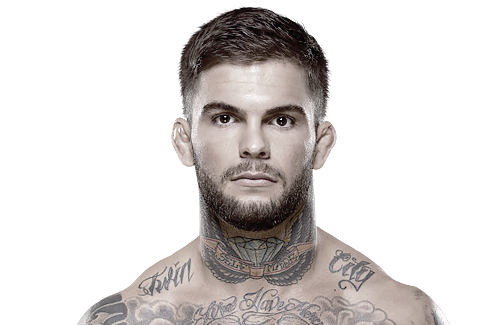 College basketball has places like the University of Kentucky and Duke, schools that turn out top NBA draft picks each and every year, never fading too far from the championship picture.

The NHL has the Detroit Red Wings, annual Stanley Cup contenders that have made the playoffs for an astonishing 23 consecutive seasons, which is longer than the San Jose Sharks have been in the league.

Team Alpha Male is the closest thing mixed martial arts has to a perennial powerhouse and 2014 saw the second wave of talent from the Sacramento-based outfit start making their presence felt inside the Octagon, resulting in T.J. Dillashaw securing the first championship victory for the team with his bantamweight title win over Renan Barao at UFC 173.

While names like Chad Mendes, Joseph Benavidez and Danny Castillo have long been synonymous with the Urijah Faber-led fight team, the likes of Dillashaw, Ultimate Fighter winner Chris Holdsworth and Andre Fili represent the second generation of talent produced inside the walls of Ultimate Fitness on I Street.

Saturday night in Las Vegas, another member of the elite squad of lighter weight talents will join the UFC ranks as unbeaten bantamweight Cody “No Love” Garbrandt squares off with Marcus Brimage in the penultimate fight of the preliminary card at UFC 182.
Check out the full UFC 182: Jones vs. Cormier fight card
Just as playing at Kentucky or Duke puts a young basketball player with NBA ambitions into the spotlight, so too does flying the Team Alpha Male flag in the world of mixed martial arts. With recognition can come pressure, but Garbrandt says he doesn’t feel any added nerves or stress heading into his UFC debut on Saturday night.

“It’s awesome being around these guys and getting to learn from each and every fighter because every person is different. It’s great to be around so many like-minded individuals that have the common goal of being world champion and being the best.

“This is the closest knit team – they’re all like my brothers and they all want the best for each other,” the 23-year-old newcomer, who has picked up five consecutive stoppage victories since turning pro in late December 2012, adds. “When one wins, we all win and when one loses, we rally together behind them to bring them back.

“There is no added pressure. When the lights go on, I show up to fight, every time and this is just another fight. If it were in the backyard, a schoolyard, in an alley or wherever, I’m going to show up and fight. I’m super-excited and just can’t wait to get my hands on this dude.”

Heading into his debut, Garbrandt is in a position that usually isn’t afforded to UFC neophytes.

Rather than stepping in against a fellow first-timer and hitting the cage when there are more people on press row than in the arena, the Ohio native shares the cage with Brimage, a 29-year-old veteran and product of Season 14 of The Ultimate Fighter.

UFC 182 will mark Brimage’s seventh appearance in the Octagon and his third since moving down to the bantamweight division. Plus, he’s entering the cage off the best performance of his career – a first-round highlight reel knockout win over Jumabieke Tuerxun that kicked off an event filled with finishes in Sydney, Australia at the start of November.

Quick and powerful, “The Bama Beast” has opened some eyes since relocating to the 135-pound ranks, and Garbrandt intends to do the same when they share the space between the eight walls of the UFC cage this weekend in Las Vegas.

“When I was offered this fight, I jumped on it. I train hard and I train with the best fighters in the world, now I’m fighting an elite fighter – a guy that is going to bring out the best in me. These are the fights that I’ve trained for and that I’ve wanted, so I’m just glad that the opportunity presented itself. I’m ready to handle business.”

As for what to expect once the Octagon door closes and the fight begins, well, that’s when you find out why everybody calls him Cody “No Love.”

Should it happen, Garbrandt will become the ninth member of Team Alpha Male to pick up a win under the UFC banner and position himself alongside Holdsworth and Fili as the up-and-comers to watch from the prolific fight camp, which is something he actually predicted a few years ago.

“It’s been life changing as a martial artist and in general in my everyday life being surrounded by these great individuals as people,” he says of being welcomed into the family of fighters that call the California capital home. “This is a team that I looked forward to getting on for so long. I remember tweeting Urijah Faber when I was 18 years old saying, ‘Hey, I’m going to be out there one day.’ He tweeted me back and here it is, nearly four years later, and I’m on the team and going to get to represent Team Alpha Male in the UFC.

“I just goes to show you that with hard work and persistence, dreams do come true.”