"Obviously, I would like to win all my fights, but I really love to battle, and I look forward to fighting a challenging opponent that is going to go out there and scrap with me." - Cody Donovan 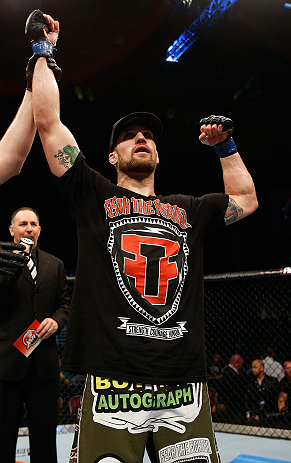 Cody Donovan was starting to work his way around to accepting that it was time to hang up his gloves and bring his fighting career to an end.

It’s not a straight-line journey for a fighter.

Very few athletes that wrap their hands with visions of stepping inside the UFC Octagon wake up one morning and know definitively that they’ve reached the end of the line. The process of getting to that point comes in fits and starts for most fighters – a gradual, reluctant acknowledgement that ambitions of competing on the biggest stage of the sport might be as close as they come to standing under the bright lights with Bruce Buffer’s call of their name echoing through the rafters.

Just like any sport, MMA has fighters that have spent their entire careers in the minor leagues - bouncing around the regional circuit, taking fights where they can, holding out hope that this next win is going to be the one that gets them noticed.

Some stick around well beyond their best before date.

Cody Donovan didn’t want to end up being one of those guys.

“I certainly felt like I had a ton of fights left in me,” explains the 32-year-old light heavyweight. “There was no part of me that wanted to stop fighting, but at the same time, I didn’t want to be one of those guys that is delusional. If this isn’t gonna happen, it’s not gonna happen, and I’ll move on and be successful at something else.

“I don’t have a ton of fights for somebody that has been fighting as long as I have,” continues Donovan, whose 10 professional bouts have taken place over the span of five years. “I’ve been training and doing this full-time for a long time, and I was kind of getting to the end of my rope. I was kind of like `Well, if it’s not gonna happen soon, it’s not gonna happen,’ and I was okay with that. I was ready to move on to coaching or other chapters or whatever.

“And then they called.”

Eddie Mendez was forced from his bout with Nick Penner, and the UFC needed a light heavyweight to compete 10-days later in Queensland, Australia on the UFC on FX fight card that served as the finale for The Ultimate Fighter: The Smashes.

It wasn’t exactly the way he envisioned breaking into the UFC, but Donovan wasn’t about to turn down the opportunity either.

“You can’t say, `No.’ When (the UFC calls), that’s when you find out what you’re made of, and I was like, `Hell yeah! Let’s do this!’ It was actually cool because there was no pressure. I had nothing to lose.

“It’s like that Eminem song,” he continues, laughing as he tries to finish his sentence. “You’ve got to take advantage of your opportunities. I went out there on nine days notice, it was a tough fight, but I knocked him out, and got Fight of the Night. It was a life-changing experience.”

So what kept him from hanging up his four-ounce gloves? Donovan attributes it to that little voice in your head that gets you into fighting in the first place.

“Somewhere deep down inside me, I have this warrior mentality where I want to test myself and be involved in battles and things like that. I just want to get out there and scrap. I think that I wouldn’t be able to enjoy my life if I wasn’t fighting. TV shows and things that I’m into – I’d be sitting on the couch watching Game of Thrones, and I’d be miserable that I’m not a warrior; that I’m not that out there fighting next to Jon Snow. I just can’t swallow that.”

The 8-2 Elevation Fight Team member gets the chance to channel his inner warrior again next weekend in Boston, when he steps into the cage with former Strikeforce prospect Ovince St. Preux as part of the preliminary card lineup on the debut UFC on FOX Sports 1 fight card.

St. Preux has won 10 of his last 11 fights, including earning a controversial technical decision victory over Gian Villante at UFC 159. A former linebacker and defensive end at the University of Tennessee, the 30-year-old St. Preux represents a step up in competition for Donovan, one that he’s very much looking forward to taking when the two share the cage in Boston.

Even more than getting the opportunity to prove himself against a more established, more experienced competitor, the matchup piques Donovan’s interest because it offers him another chance to live up to his nickname, “Donnybrook.”

“The thing that I like about the matchup is that he’s a tough, talented guy, and it’s going to produce the type of fight that I want. Obviously, I would like to win all my fights, but I really love to battle, and I look forward to fighting a challenging opponent that is going to go out there and scrap with me. He’s not going to break easy, and we’re going to get in there, grind, beat each other up, and hopefully walk away with another Fight of the Night bonus.

“I’ve had wins in the past where I went out there, snuck out a win, and did whatever I had to do to win. I’ve fought safe fights where I wasn’t super-exciting, and I was happy that I won, but at the end of the fight, I had this feeling like I cheated (my opponent); like I didn’t go in there and fight. I fought a very smart fight, I got the win, and that’s what I felt like I had to do, but…”

Donovan pauses mid-sentence, shifting from rationalizing the performances that frustrated him to expanding on the outings that he wants to be the calling card for his career.

“As an amateur I fought this dude named Ian Berg, and me and Ian went out there and killed each other. It was horrific – just a huge battle – and I won the decision, but I remember when we were standing there waiting for the decision to be read, I remember being proud and thinking, `Whatever these judges say, they can’t take away what he and I just did.’ That’s what I want.

“I have this goal that when I’m an old man, I want to be able to look back at all these epic battles, and that’s my goal every fight.”

Just as the road to retirement is rarely a direct path, sometimes, the route from the regional fight scene to the UFC is a circuitous journey as well.

After standing on the precipice of calling it a career, Donovan is now looking to extend his winning streak to five with a second consecutive victory in the UFC. The little voice that pushed him towards fighting in the first place kept him going to the gym, kept him pursuing his craft, and in the end, made all the struggles worth it.

“I’m a believer in God’s plan, and God’s plan is rarely the same plan that you have for yourself, and it’s going to see itself out in time,” he says. “Without those injuries and without those hiccups, things wouldn’t have come together the way they did.

“I want to fight in the UFC for a long time. I want to have some epic battles that I can be proud of, but if I get in a car accident tomorrow – knock on wood – at least I know that when the call came, I stepped up and did the best I could.

“There is something very comforting to me about that.”