Cody Brundage Is Fighting For More Than Himself

Cody Brundage Has All The Motivation In The World As He Looks To Get A Big Win At UFC Fight Night: Santos vs Ankalaev
By Thomas Gerbasi, on Twitter: @TGerbasi • Mar. 11, 2022

The UFC debut. It was everything Cody Brundage had wanted since he began fighting, and now it was here at T-Mobile Arena in Las Vegas last September. Sure, it was short notice, but that didn’t matter. In fact, nothing about the fight really mattered as Brundage prepared to make the walk to face Nick Maximov.

“I remember thinking for a split second before that fight, right before I walked out, ‘I kinda hope this goes 15 minutes so I don't have to think about what's going on in real life,’” said Brundage.

In real life, far removed from the bright lights of a UFC pay-per-view event, Brundage and his wife, UFC veteran Amanda Cooper Brundage had gotten some bad news about their nine-month-old baby girl, Kingsley.

“She had been diagnosed with a super rare gene mutation that affects her development pretty severely, so me and my wife were trying to comprehend that and deal with that,” Brundage said. “I actually got the news on that Thursday (of fight week), and that's not a great thought to have before you go into your fight, but it was a lot.”

It’s a lot in any instance, let alone before something he had been chasing for years.

“It was the highest of highs and that had been my dream for so long to be in the UFC,” he said. “I was finally there, and me and my wife were super excited and happy. And I was also feeling guilty about being happy about being there because of everything that was going on with my daughter. It was tough to battle those emotions. Your UFC debut is already crazy with emotions, and then we just added a lot to that pot.”

Brundage got his 15 minutes, but the fight didn’t go his way, as he lost a close, but unanimous decision to Maximov. In the great scheme of things, it didn’t really matter, but when asked about the fight itself, the South Carolina native takes plenty of positives from his eighth pro bout.

“I don't think I have any regrets,” he said. “There are things in the fight that I could have done better, for sure, but I think I made a good account of myself - it was on 48 hours' notice, I made weight, I handled the job like a professional, I tried to be entertaining, and I got in, so those are all big things and great things moving forward.” 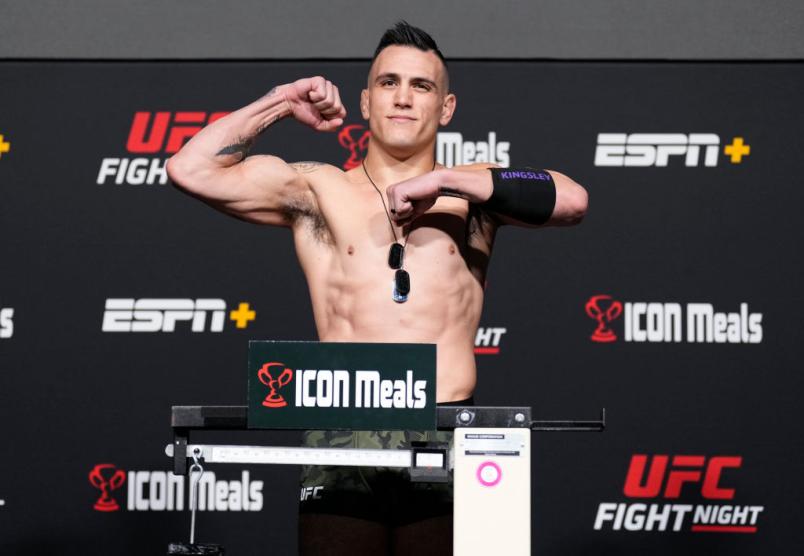 Cody Brundage poses on the scale during the UFC Fight Night weigh-in at UFC APEX on March 11, 2022 in Las Vegas, Nevada. (Photo by Chris Unger/Zuffa LLC)

On Saturday, Brundage makes his second UFC appearance against Dalcha Lungiambula. Between last September and now, the Brundage family and their beautiful daughter continued to create the bond that will carry them through any struggles.

“With time you try to figure it out, but I feel like I'm a young guy anyway,” said the 27-year-old. “I didn't have the craziest or the toughest upbringing, and neither did my wife. We kinda joke about it that we're kinda learning on the fly how to deal with that really tough adversity of dealing with something with your child, which is tough. Whether she (Kingsley) was completely healthy or not, you're always scared and worried and then when something goes wrong, it's tough to deal with. And you've got to be strong for her and for your wife, and in the moments when you're weak, they've gotta take over. So we've been figuring out the balancing act of how to be there for one another and be there for her.”

Being in Colorado, Cody and Amanda are away from family, but with their gym family at Factory X in Englewood, especially hard coach Marc Montoya and his wife, Jarah, they’re making it all work for their smiling and happy baby.

“The toughest part is not knowing (what the future holds), but my wife is a rock star,” Brundage said. “She works with her all the time, and I feel like she's doing really well for what she's dealing with. We're positive. We're both fighters and she's gonna be a fighter, so we try to stay hopeful.”

That hope applies to Brundage’s career in the middleweight division as well, as he’s found the balance between work and home to get prepared to tackle the best 185-pounders in the world, beginning with Lungiambula. 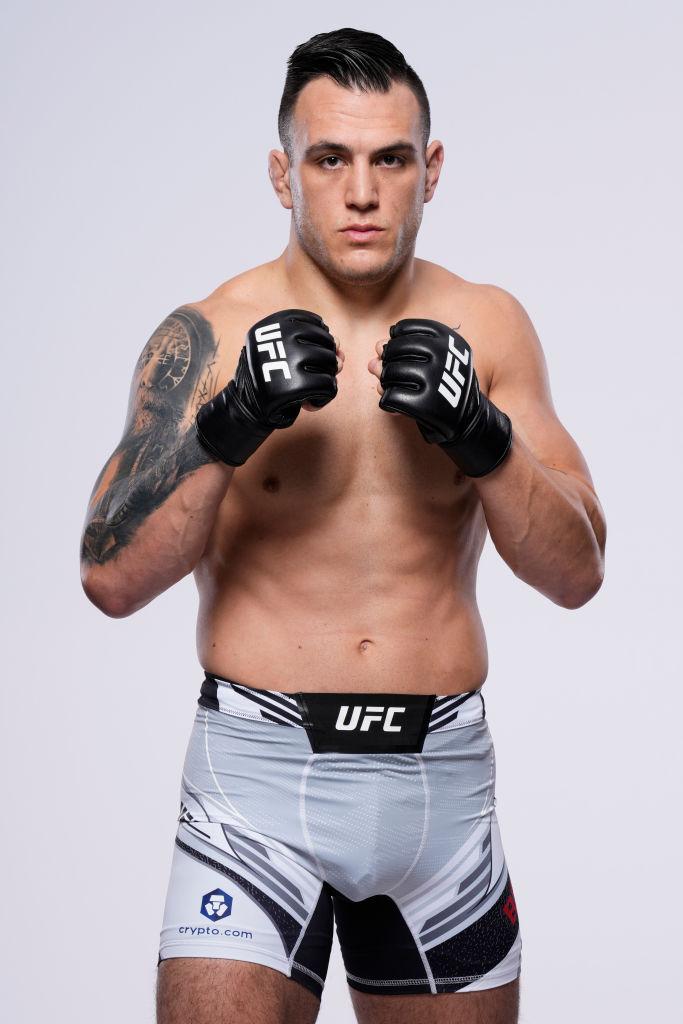 Cody Brundage poses for a portrait during a UFC photo session on March 9, 2022 in Las Vegas, Nevada. (Photo by Mike Roach/Zuffa LLC)

“I think I'm a better fighter, but he's super dangerous, and when there's that danger factor, I think that brings out the best in you because you gotta be sharp,” he said. “I lost my last fight, but I didn't really think that kid was that dangerous. I thought if I was gonna lose, it was gonna be the way that I lost. With Dalcha, this guy comes to put your head in the fourth row with everything he throws, and you just have to be hyper-aware.”

Fighting someone who tries to put your head in the fourth row would keep anyone hyper-aware, but if Brundage ever loses focus in the gym, he’s got his bride – a veteran of six UFC bouts – to keep him on track. And yeah, if he ever brags about being on a UFC pay-per-view card, she can say that she’s done it three times already.

“She's one of my toughest critics and toughest coaches, but she's, for sure, my biggest supporter,” Brundage said. “There is a little healthy rivalry there - she has her way of doing things and she likes to make sure that I know if I'm not doing them the way she would do them. But it's cool because she also understands the jitters and the nerves and the pressure that you're under, fighting at the highest level.”

That pressure has nothing on the pressure that comes along with being a parent. And the Brundages have that part down, so the fighting should be easy. Well, maybe not easy, but at least manageable. And whenever Brundage needs a boost, he’s got Amanda…and Kingsley, to push him.

“It's all perspective,” he said. “My wife, she wanted to come back and fight. She's a very talented fighter, she fought in the UFC, and she basically told me, ‘Listen, you're in the UFC now, you gotta do what you gotta do to be successful, and I know what that takes because I've been there. And it's gonna be really hard for us both to do that while we're dealing with Kingsley, so I'll take a back step and I'll take over the parent role a little bit more and you're gonna take over the fighter role.’ So I feel like if I didn't commit to that the way I know I should, it would be disrespectful to her and the sacrifice she's making of her dreams. I feel like I'm carrying both our dreams a little bit, so that's really good fuel to the fire for me.”