The Cocky Faith of Mike Easton

"I respect him as a fighter outside that cage, but I really, really hope
he’s ready because I’m going in there to knock his head off." - Mike Easton 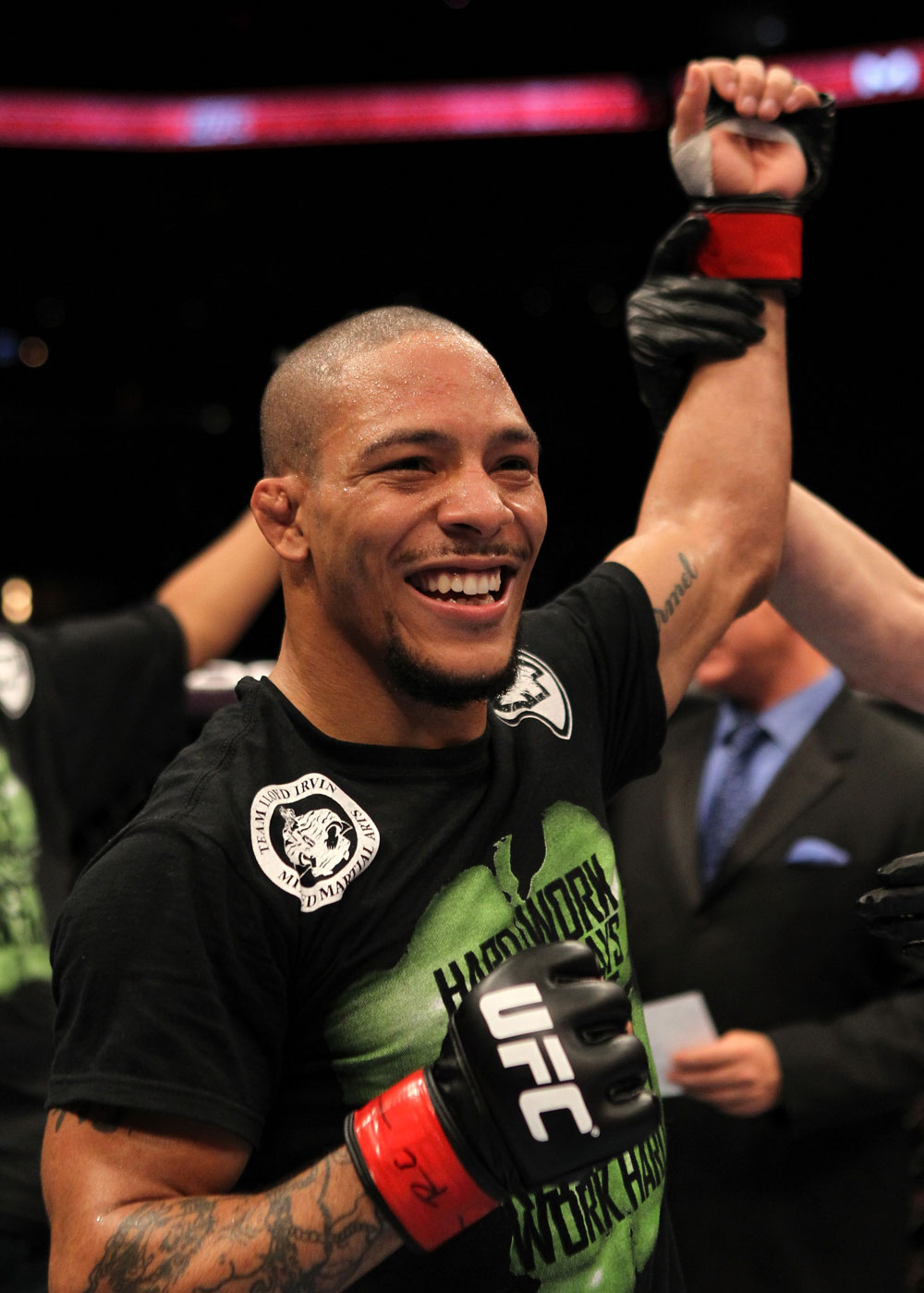 Every athlete has his or her particular reason for doing what they do, and UFC bantamweight Mike Easton is no different. But while others may compete for money, fame, glory, or any combination of the three, “The Hulk” is a little more complex when it comes to his motivations.

Sure, he wants to put food on the table, carve out a nice life for himself, and be recognized for what he does, hopefully winning a world championship along the way. But if you ask him about his goals in the sport, he begins to tell his hopes for the future with a story from the past.

“I grew up with a learning disability, and I had a hard time reading and writing and spelling, and that’s something I’m always working on all the time,” said Easton, who was also born premature at just two pounds, three ounces a little over 28 years ago. “For me, when I see other people struggling, I’ll hang around people that struggle, and my goal is, if I can make it and do the things that I need to do, my goal is to spark the minds of people to always continue to follow their dreams, regardless of what situations they’re going through or what things happened in their lives. If I can get different cultures and different groups of people or family members that are beefing with each other to sit down and watch the UFC or watch me, that’s me changing the world right there. I feel as though that mixed martial arts and the UFC stops racism.”

Get him on the topic of helping others in the Washington, D.C. area where he grew up, and Easton is off and running. So many athletes talk about helping their community or “giving back” when they make it big, but just as many consider giving back being the act of writing a check while they leave skid marks tearing out of town. On the other hand, Easton, as passionate about whatever he’s talking about outside the Octagon as he is when he’s fighting inside it, has a plan mapped out, a strategy that if only implemented by the powers that be, could be life changing for many kids and young adults lost to the streets.

“Of course I want to be the UFC champ, but I feel like my mission is much bigger,” he said. “It’s to bring people together and teach the world all about love. As you know, in this area, the Washington D.C. area, the DMV, this is a rough area to grow up in, and although it’s so beautiful and I love this whole area, we still have a lot of violence and things going on that happen in the inner city and also outside the city, and it’s like ‘put down the guns; if you’ve got beef with each other, join a gym, put the gloves on, you can do this. You settle it in the gym, if you lose, you live, and you gotta work on what you need to work on, and you handle your problems there.’”

“I have a big mission,” he chuckles, and he’s not lying. But you’ve got to admire a young man whose end game isn’t strictly about himself. He credits his parents for this mindset, saying “this was the way I was brought up by my mom and dad. They’re still in my life, they’re still together, and they’ve known each other since they were in elementary school.”

That doesn’t mean Easton grew up in surroundings best saved for a Hallmark card. It’s rough in the D.C. area, and the fighter doesn’t mince words when he talks about what he’s seen over the years.

For Easton, his saving grace came in the form of Lloyd Irvin’s Gym, where he walked in at the age of 17 and told the renowned jiu-jitsu coach that he wanted to fight in the UFC. Ten years and a black belt from Irvin later, Easton’s dream came true. The way he describes it, it was a serious case of “cocky faith.”

“It’s weird, but I just want the whole world to see me,” he laughs. “I’m kind of a showman / exhibitionist and I just love my job. Since I was a 17-year old kid, I felt like I was gonna be in the UFC, and that’s just me having faith. If I say I’m gonna do something, I’m gonna do it. If I say my dream is gonna come true, then my dream is gonna come true. It’s something my pastor’s talked to me about, and that’s having cocky faith. And that’s one thing that I do have. I believe that I can be whatever I want to be.”

He is also bold enough to believe that he can make a difference in the lives of the youth in his community, and the way he sees it, everything starts with school, or more specifically, giving kids something to do after classes are done for the day.

“They take out a lot of the extracurricular activities such as wrestling, boxing sometimes, and they even stopped football and basketball sometimes because of money,” said Easton. “And I don’t think that’s fair because now these kids don’t have anything to do. And if they don’t have anything to do, what are they gonna do now? They’re gonna go out and cause mischief and cause trouble, or they stay in the house and play video games and get fat.

“If you bring mixed martial arts inside the school system, everyone will be too tired to even want to fight each other,” he continues. “If you’re training with each other all the time, you’re getting your bumps and bruises, and all of a sudden you’re learning how to have respect for each other – martial arts respect. And eventually they will learn respect for their teachers and learn how to listen and learn. If you’re gonna fight and do mixed martial arts and want to get into the UFC, you have to listen to your coaches and be able to humble yourself so that you can learn the things that you need to learn.”

It’s a lofty goal and one he believes can be achieved, yet despite his intentions as a community-minded citizen, Easton never wants anyone to forget that his day job is as a fighter, and after taking a decade to get to the UFC, his impressive wins over Byron Bloodworth and Jared Papazian prove that he has every intention of staying here.

“I think the long road was perfect for me because I had every opportunity to learn everything that I had to about the fight game,” said Easton. “And what a lot of people don’t know is that I started out at 17, but I’m an old school guy, and they’re starting to get to know who I am now and I’m starting to get the recognition.”

He also has the confidence that it takes to be a success in a tough division, and this was never more evident than when he stepped up on short notice to face veteran Ivan Menjivar on this Saturday’s UFC 148 card in Las Vegas. On paper, it’s the kind of fight that could possibly steal the show from the long-awaited main event rematch between Anderson Silva and Chael Sonnen, and that’s definitely Easton’s intention. The only question is, coming off his heated battle with Papazian in January, one marked by some serious bad blood, how will the emotionally-charged Easton get a full head of steam going when he faces off against one of the sport’s nice guys in Menjivar? It’s simple, says “The Hulk.”

“It’s a fight. Outside the cage, everything’s cool. Inside the cage, I’m not showing him any respect. I don’t care who he’s fought or who he trains with. I just don’t care. Because now it comes down to the business of fighting, and my job is to fight. I respect him as a fighter outside that cage, but I really, really hope he’s ready because I’m going in there to knock his head off. I’m in shape and I’m going in there to fight. And I hope he’s ready to fight and I hope he doesn’t take me lightly because I’m definitely one of the fighters you shouldn’t take lightly.”

That’s for sure. Mike Easton is here to stay, not just for himself, but for anyone who needs him.

“People notice me and know who I am now, but I’m never too big for the fans or for anybody,” he said. “I am a human being just like everybody else. I’m not a perfect person, I’m far from it, but I am real, and I’m a human being. And I just treat people how I want to be treated.”