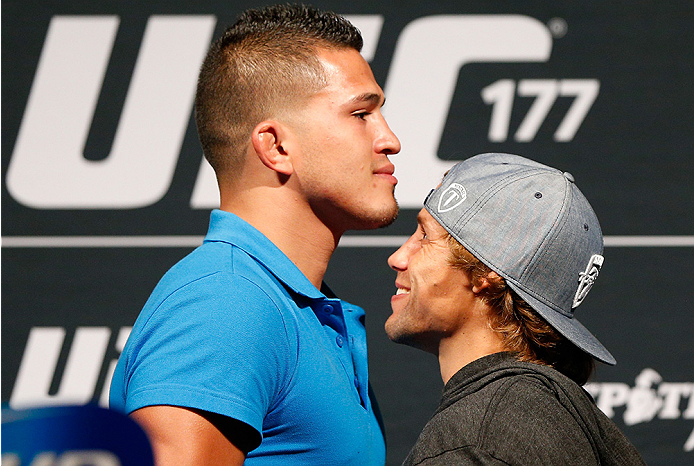 What have you been up to since your win over Alex Caceres?
I’m been healing up. I had a little bit of an injured rib, and I thought it was broken, but it’s not, so that’s good. I’ve been helping some of the guys at my gym. We’ve got a lot of big fights coming up, helping run the classes, and just traveling a little bit, doing work.
What were you able to teach the cast members during your time as a guest coach?
I mainly showed them some of my bread and butter stuff for submission. The girls like it. They learned some things they can implement in their game right away. I talked to them a little bit about the mentality, about loosening up and having some fun, about going for the kill, about the longevity of the career. It was good and they learned some good moves too.
Yea I could tell, I saw Carla going for that neck, so I know you had some influence there...
(Laughs) haha…yea!
So you coached season 15 Of The Ultimate Fighter, what advice can you give to Anthony about handling all the personalities in what is most likely a first time coaching experience?
I think the most important thing is to stay positive with them no matter what. Each fighter has their own individual career at stake. Anthony’s team is on a four-fight win streak, so he doesn’t need to worry about it, but wins and loss can bring ups and downs to a team, and these girls are here for themselves, so just remind them of that and stay positive.
What advice would you give to the girls on making it through the six weeks?
Just enjoy every bit of it because it’s a once-time experience and realize that this a real opportunity to not only get better and get exposure, but to have a great time. That’s the thing a lot of people don’t understand about our fight game is, it’s a hard sport. It’s a difficult sport. And if you’re not having fun, then your life probably sucks. Because you’re fighting people, you’re pushing your body to its limits, so I just encourage these girls to have fun.
When you were rolling and training with the cast, did anyone stick out as a front-runner?
I saw some real talented girls. Jessica is real tough. One of the girls who I think need some more experience but has a lot of potential and I like her attitude, is JoJo (Joanne Calderwood). She’s like super soft spoken, the cute little voice, but she kind of a killer so. I think moving forward she’s a young enough fighter, and a talented enough fighter to have some success.
What are your predictions for the finale?
I haven’t had a chance to train with all the girls but I think I always tend to lean toward the grapplers. If they’re good enough, they can get the fight to the ground and control it there. We saw Carla just fight, Jessica is a good grappler, even JoJo has good grappling even though she’s a standup artist. And Randa is tough too. Should be interesting to see.
And what about your overall opinion on women’s mixed martial arts?
I love it. We all know women can be brutal (laughs). No better place to have them showcase their talent than in a fight. If you look back at junior high and high school, guy fights are cool, but the whole word stopped when the hair flew.
The Ultimate Fighter: A Champion Will Be Crowned airs every Wednesday on FOX Sports 1 at 10PM/7PM ETPT. Be sure to check out ufc.com/tuf every Monday for practice highlights and every Tuesday for film sessions with the fighters taking the Octagon that week!