As a coach, it's brains over brawn for Justin Gaethje 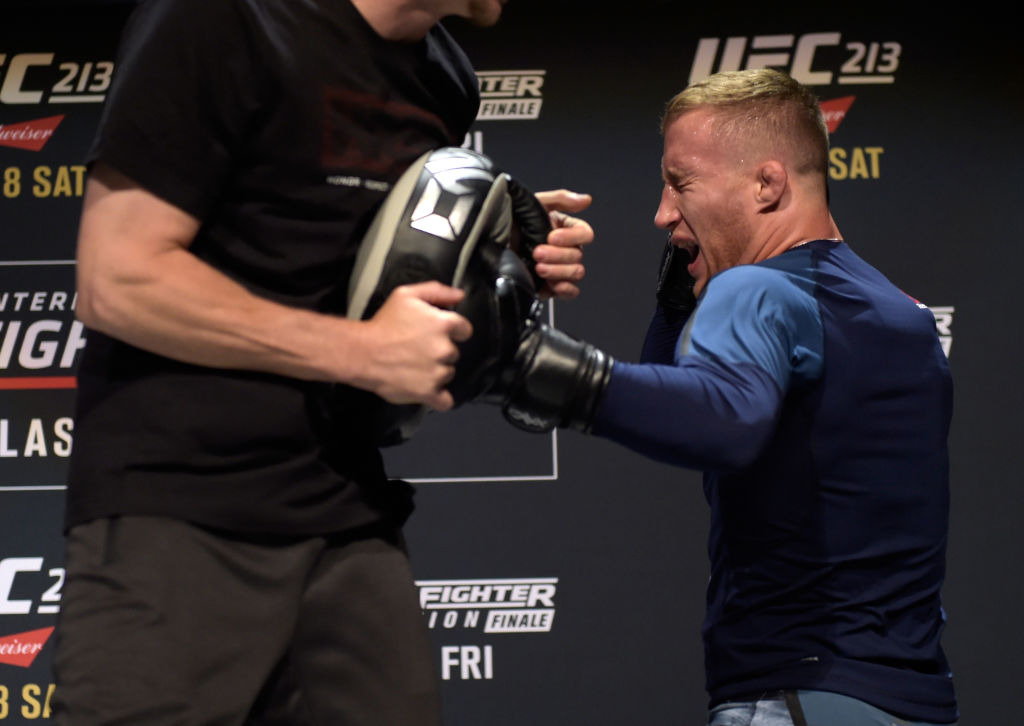 Justin Gaethje holds an open workout session for fans and media at Park Theater on July 5, 2017 in Las Vegas, Nevada. (Photo by Brandon Magnus/Zuffa LLC)" align="center" />Some might say that the attributes that have taken UFC lightweight contender Justin Gaethje to an 18-0 record, a WSOF title, and the No. 5 spot in the 155-pound rankings are things that can’t be taught.

So how did the Safford, Arizona native approach his coaching stint on the upcoming season of The Ultimate Fighter (which premieres on August 30)?

“You’re right, it can’t be taught,” Gaethje agreed. “But that doesn’t mean it’s not in more people that just don’t realize it, that don’t realize their own potential, or that are scared of their potential. So my job this season was to teach a philosophy to my athletes. I brought my coach Trevor Wittman, teammate Matthew Lopez and my other coach Luke Caudillo to really work on the technical aspects of this game. But what I think is the most important when it comes to fighting is your mental durability. I think most fights are won or lost before they even start, and that’s what I came here to teach.”

Fresh from a UFC debut in July that was so memorable it pushed him right into this high-profile gig on TUF coaching against former world champion Eddie Alvarez, the 28-year-old was formerly the hero of the hardcore fan base. But after winning the frontrunner for Fight of the Year by stopping Michael Johnson in two rounds, Gaethje’s reach has grown considerably. And after six years as a pro, he’s fine with being an “overnight success.”

“I’ve been building towards this for a long time,” he said. “The UFC is the pinnacle of the sport and I don’t think by any means you need to rush the process, but when you get here, if you’re successful, that’s the name of the game. A lot of people didn’t think my style would translate to this level of fighting, and I knew it would from day one. I just had to take my time, prepare and be ready for the opportunity.” 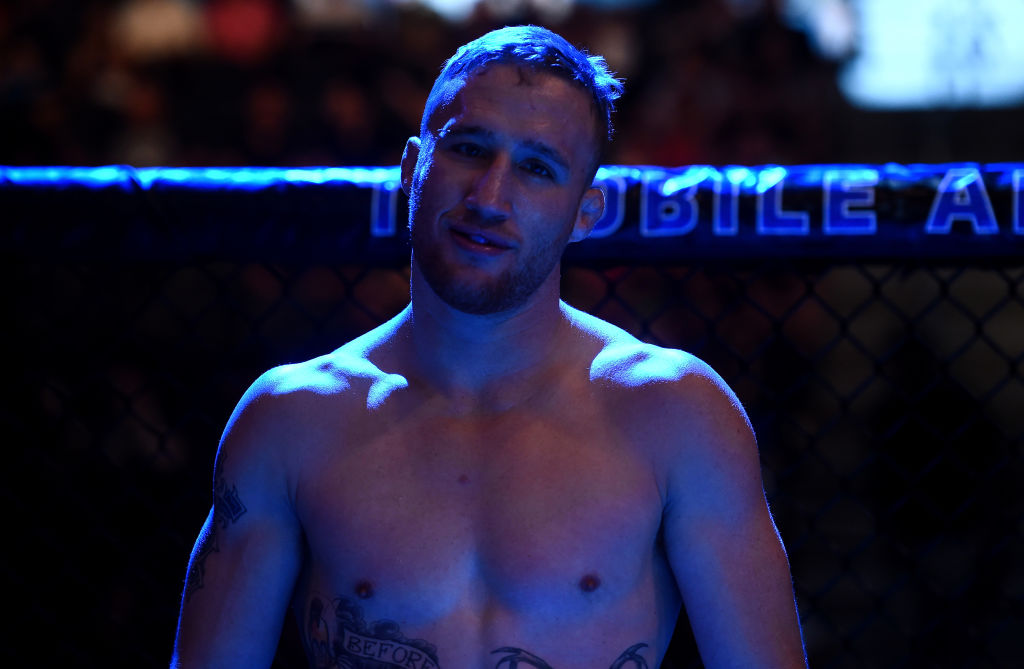 The Ultimate Fighter Finale at T-Mobile Arena on July 7, 2017 in Las Vegas, Nevada. (Photo by Brandon Magnus/Zuffa LLC)" align="right" />And when opportunity knocked, Gaethje responded by bashing the door down and engaging in one of the thrilling wars that have become his calling card. And while no fighter needs to have too many of those, Gaethje believes his success has inspired those in his hometown.

“I’m from a very small town and you have a few options when you graduate high school,” he said. “You work for the mine, work for the prison, be a teacher. Or you get sucked into the small town living and drinking every night and doing drugs. So they loved seeing me. I’m giving a lot of people inspiration from where I’m from and they’re definitely loving the process along with me.”

“That was our goal when we started this,” he said. “The good thing about this season was that I got to choose from a group of 16 athletes that are vying for a world title and not just one or two spots at the bottom echelon of the sport. So I got to work with athletes that want to be the best in the world, so every day they come in, they’re hungry and ready to work.” 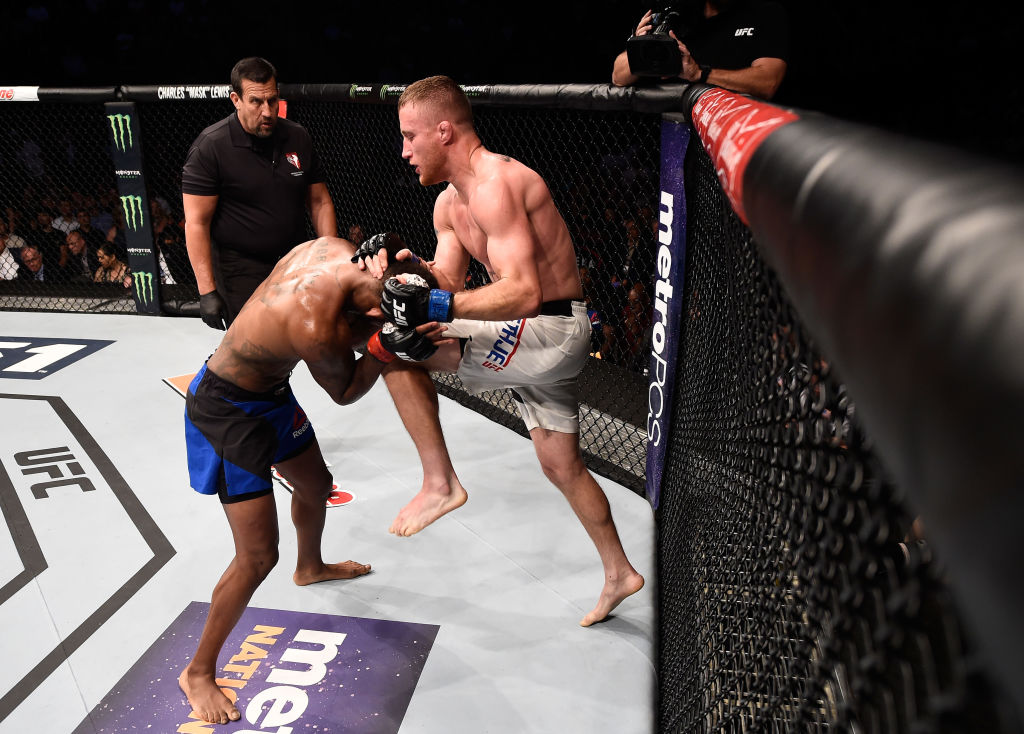 Work was the key word for Gaethje as well, not drama, not rivalry, not anything to do with trying to get in the head of his future opponent Alvarez. The bottom line is that when the two meet in the Octagon, they will fight like bitter enemies. But for now, respect is the key word.

“We saw last season (with Cody Garbrandt and TJ Dillashaw as coaches) that people love drama, and it’s awesome and everything,” Gaethje said. “But the base of this sport came from respect. Wrestling is all about respect, karate is all about respect, jiu-jitsu is all about respect and when you combine all those, you can’t just throw respect out the window. Me and Eddie have been nothing but respectful to each other. We’re both here to give our team the assets that we use to try and be the best in the world every day. And hopefully people will grasp the concept that we were strictly here to help our teams. It wasn’t about me or Eddie. It was all about the fighters, and it was a great season.”

And one that will be capped off by a great fight between Gaethje and Alvarez that may be the only matchup with the potential to actually top Gaethje vs. Johnson.