In an effort to provide greater insights into the upcoming championship fights taking place at UFC 275, UFC staff writer E. Spencer Kyte sat down with three of the sharpest coaches in the sport — Eric Nicksick of Xtreme Couture, Tyson Chartier of the New England Cartel, and Sayif Saud of Fortis MMA — to get their thoughts on the matchups, what could determine the outcome of each contest, and simply talk about the elite combatants poised to step into the Octagon in Singapore.

In addition to breaking down the light heavyweight main event, the trio of standout leaders looked at the flyweight championship clash between Valentina Shevchenko and Taila Santos, as well, deciphering what, if anything, the challenger can do to potentially knock the dominant titleholder from atop the division.

WHAT MAKES SHEVCHENKO SO GOOD?

Anyone that watches Shevchenko compete inside the Octagon can see that she’s a highly skilled, talented mixed martial artist, but what do these coaches pick out as the key things that really stand out in her game or preparation that make her one of the best fighters on the planet today?

Nicksick: If you’re building a video game character, she’s 99 or 100 on every attribute there is, and what I think she’s done so brilliantly over the years is she was primarily known as a striker years ago, but then you saw her take down Julianna Pena and people that she was supposed to be outgrappled by, and she had no problem there.

Not only did she have no problem there, she was better there, and the aggressor there.

Chartier: I think it’s that she’s so well rounded. She’s already lost, so she’s not carrying around that 0 that puts pressure on you. She’s already lost and she knows she can still come back and be considered the best in the world.

In my opinion, how they train, that’s how we train, and that’s how you should train. You should have a small team, with a few fighters, and you travel around and get the best training. I think she’s got the best training setup that you can have, she’s so well-rounded, and she’s mentally strong and now she’s fighting girls who aren’t that experienced.

Saud: She is literally good everywhere. She is great at wrestling, she’s got good jiu jitsu, she’s very fundamental in her positions and the way she executes and stabilizes her positions before she starts to systematically break people down is very impressive.

She has no holes in her game. She’s probably the most complete fighter in the UFC right now. She is so good at executing, her tempo is amazing, she can switch the fight up whenever she needs to.

Nicksick: Honestly, I think her behavior stands out above everything else; the way she carries herself and acts outside of the cage as a champion, continually getting better, continually looking for ways to grow is a testament to her and her camp.

It’s hard to catch-up with somebody like that because she’s got that LeBron James or Michael Jordan or Kobe thing where it’s ‘I know I’m the best, but I’m also gonna work harder on the weekends so no one can catch up to me.’

KEYS TO VICTORY FOR SANTOS

Despite entering on a four-fight winning streak capped by a first-round submission win over Joanne Wood, the 28-year-old Brazilian challenger is a considerable underdog heading into her showdown with the long-reigning flyweight champion.

Defeating Shevchenko is a daunting task that no one has come close to accomplishing since she relocated to the 125-pound weight class, so how can Santos shock the world and claim the title on Saturday night in Singapore? What are the elements she needs to focus on and remember as she heads into battle this weekend?

Chartier: You just have to remind her that this girl has been beaten before. She’s on a big winning streak and everybody thinks she can’t be beaten, but look what Amanda did to her; it’s not like she’s invincible.

There is one thing I think that is flying under the radar a little bit, and it’s if you look at Taila’s fights, she’s beating people at what they’re best at right now. She’s not afraid to go at someone and beat them at what they’re good at, and to me, that shows she’s mentally strong.

It’s like, ‘Oh, you’re good at jiu jitsu? I’m going to take you down and smash you!’ She’s not hanging back in fights, she’s not feeling people out — she’s coming forward, throwing a punch, grabbing you, and putting you on the ground. I don’t see this being a Megan Anderson versus Nunes thing where walking into the arena, you could tell that she was scared. I don’t see Taila Santos being one of those people.

Saud: I really think this is an old school ‘We need to get better in every area, and we need to make sure that our cardio is in a place that it has never been so that can be our X factor; we can push the pace and if we do get her hurt, maybe we can try to overwhelm her and finish her.’

That would be my take on it. There is no way you look at it and say, ‘Valentina is weak here and she’s weak there;’ it’s just not there. You’re lying to yourself and lying to your athlete isn’t a good idea. 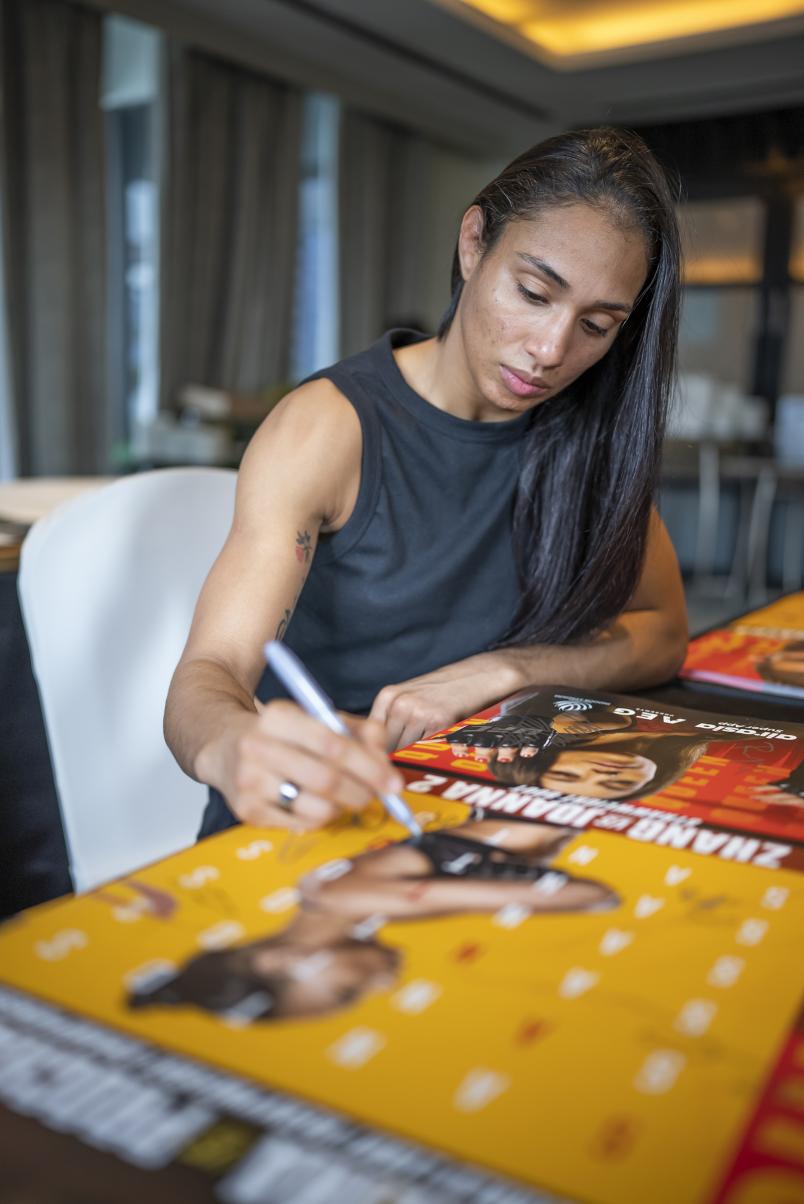 Nicksick: I think you try to do some erratic things, meaning you’re not going to kickbox with this girl where it’s going to be a nice one-two down the middle; you’re going to have to do some step-through overhands, some same side head kicks, some spins — some things that can maybe catch her off guard.

You really can’t be this beautiful, perfect striker against Valentina because if you try to beat her technique-for-technique, you’re in trouble and you’re gonna lose. She’s going to have to do something almost erratic to try to catch her, to try to get something off.

Most people have a pretty good idea in their heads about how this one is going to go, but what is the one thing Santos could do that might lead to a dramatic shift in how this fight plays out and potentially increase her chance of leaving Singapore as the UFC flyweight champion?

Nicksick: I know she can grapple — we’ve seen her grapple pretty well — so I think some of those grappling positions, I’d like to see transitional submissions where if you get her on a takedown and Valentina is building up a base, all of a sudden you’re jumping on her neck or jumping hooks. Do something within the transitions that can catch her off guard.

Just go for it! Every f****** opportunity you have, just go for it, because we know what it’s like getting in there with Valentina. I’ve seen it first-hand with Jessica Eye — it’s not an easy task. Our game plan for that fight was to try to be a little more erratic in our motions, our rhythms to where she was almost fighting a drunken brawler because you can’t get in there and try to outpoint her.

Chartier: The big X factor for this fight is how physical Taila Santos is. I think it’s all going to come down to if Taila Santos can close the distance, connect her hands on a body lock, and if she’s able to overpower (Shevchenko) in a body lock, I think she has a chance.

If she gets in there on the first body lock and Shevchenko just throws her off or takes her down or pushes her off, I don’t think Taila Santos has any chance of winning. If I go out in the first round and I see Taila Santos close the distance and get a takedown with the body lock early, I don’t see why she wouldn’t be able to get that all five rounds, as long as she doesn’t get knocked out.

Remaining on top for an extended period of time is difficult for a number of reasons, including facing a constant string of challengers looking to experience the greatest moment of their career at your expense.

The flip side of that for the champion is that after four, five, or six successful title defenses, getting motivated to push through a grueling training camp for the next challenger in line might not be as appealing as that initial championship opportunity or chance to defend your title.

As the great Marvin Hagler once suggested, “It’s tough to get out of bed to do roadwork at 5am when you’ve been sleeping in silk pajamas.”

Might that be a potential stumbling block for Shevchenko?

She’s not one of those fighters that have other distractions. She likes to dance and shoot and all that stuff, but I don’t think she has distractions away from what her main goal and purpose is, and that is to be the best martial artist in the world, man or woman.

I think the most important thing to her is that and she’s shown no slowing down in that area. I think that is what she wants more than anything else in life, and that’s what it takes to be a champ.

Tyson Chartier runs the show for the New England Cartel, which includes Top 10 bantamweight Rob Font, and Top 5 featherweight Calvin Kattar, who returns to action next weekend in a main event assignment opposite Josh Emmett in Austin, Texas.

“The General” Sayif Saud runs the show at Fortis MMA in Dallas, which has become a hotbed of home-grown UFC talent during the Dana White’s Contender Series era. The list of graduates includes ranked competitors Geoff Neal and Ryan Spann, as well as Kennedy Nzechukwu and Miles Johns.