Marshall: Glover’s is his durability; he’s just so f****** durable. We see him get hurt and be okay and recover.  Jamahal Hill, we know what it is — it’s that youth and his power.

Nicksick: This is a pretty easy fight to call — it’s Glover’s grappling and Jamahal Hill’s power.

Kyte: Everyone would love a 10-second knockout or a quick submission, but that’s not often how these things go, especially not at the championship level. Instead, it’s usually the competitor that has crafted the better game plan and did the better job of executing things inside the Octagon that comes away with their hand raised and the gold around their waist.

Nicksick: I think, for me, when you look at game plans or skill gaps, you don’t want to flip a coin if you’re Glover and try to stay on the feet too, too long, because that levels the playing field for Hill. And if you’re Hill, you want to do everything to keep this fight on the feet and not engage in the grappling; keep the fight where the percentages are in your favor.

Both guys are going to be right away trying to get to that position that favors them.

Marshall: We know what it is for both of them — Glover’s got to get takedowns. He doesn’t mind shooting them in the open, and he’ll put you on the cage and do that. Glover needs to make it a dirty, grimy fight — he gets in there, eats your shots, and he’s standing there for it.

And then look: Jamahal Hill? It’s landing that bomb, right? That’s where they’re going. He’s not going to touch-touch-pop, touch-touch-shot — you know what he’s doing. There is no secret to either one of them. 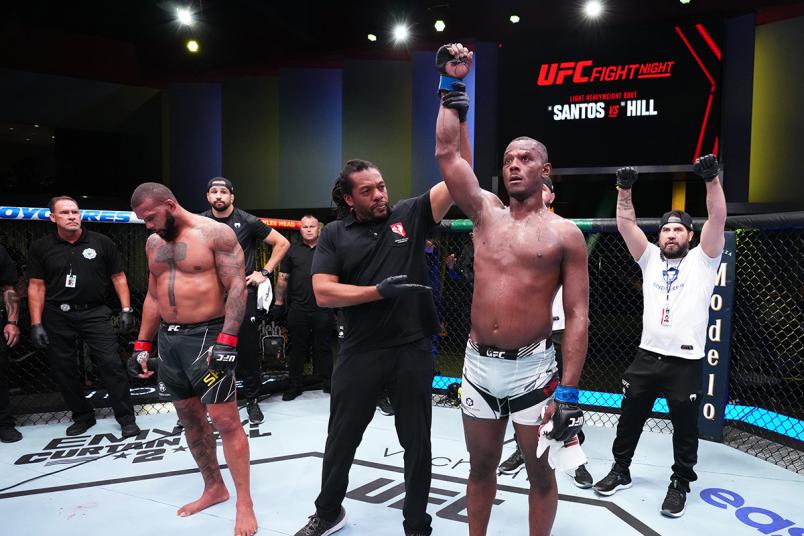 Marshall: At an old age, going through a war like Glover did with Jiri, that can take a real toll on somebody. That wasn’t one shot that could put him out — that was a war of a fight. Robbie Lawler and Rory MacDonald, neither one of them was ever the same again after that fight — still good, but they weren’t the same, so you don’t know what that Jiri fight did to Glover.

Nicksick: I would say Glover’s experience being in these positions before — in title fights and understanding what it takes; five rounds. I know Jamahal Hill has been scheduled for a main event before, but I think the magnitude is different.

RELATED: Teixeira Visualizes Winning The Belt In Brazil | Jamahal Hill Here To Answer All The Questions

I think it’s the mental preparation of being thrown in the spotlight (this quickly). I think Glover might have the edge there in terms of preparation and knowing how to deal with that pressure.

Nicksick: For Jamahal Hill, he’s a guy that carries power in both of his hands — we’ve seen that — and being in the big cage, he’s going to have to really utilize his footwork. He doesn’t want to be in place too long.

We call it “first and third” — I want to hit the guy first, half-beat, move my feet to avoid the counter, and then try to find the kill shots after that. I think all those things are going to be very important for Jamahal.

The other thing I think is going to be huge is framing off and not getting engaged in the underhook battle with a guy like Glover. Yes, it’s the defense for getting up and stuff like that, but it also keeps you attached. It’s important to not stay attached for too long, or even go Greco-style, T-Rex arms, keeping them inside on the body — do that and not stay attached.

For Glover, he’s going to have to try to draw out some of that power with his feints, and use that to get underneath him. I don’t think he needs to shoot a traditional double leg — if Jamahal is southpaw, he’s probably better off with a head-inside single combination — but chain wrestle.

I think that’s what we’re gonna see. If you look at the skill gaps, the biggest one is Glover over Jamahal in the grappling department. I want to see if he finds good ways to get inside with the feints.