For UFC 276, Kyte called upon James Krause of Glory MMA & Fitness and Tyson Chariter of the New England Cartel to provide their thoughts on four points heading into the featherweight championship trilogy bout between rivals Alexander Volkanovski and Max Holloway.

At a time in the sport where everyone is pretty solid everywhere, generally speaking, what is the one thing that each of these competitors do better than anyone else?

Krause: Volkanovski is damn near perfect. He’s fundamentally amazing. Fundamentally elite is what I would say. He just doesn’t make mistakes. He’s durable. We saw what he can deal with mentally and physically and technically in the Ortega fight. Jesus, who would have thought he would get out of those chokes, you know?

He does everything right, all the time, and he doesn’t get shaken mentally by pressure or volume or being hit, he’s durable; he’s got it all. He’s got it all.

Chartier:  He’s just so diverse. (Volkanovski) has shown that he keeps evolving as a fighter. With Max, you kind of know what to expect at this point, and it’s a s***-storm — he can beat anybody in the world on any night, and it works — but you’re seeing Alex, it’s almost like he’s still evolving.

Every fight, he shows different wrinkles of his game and that he’s bettering different areas, getting way more comfortable on the feet. Now he’s a really creative, sharp striker. You can call him an elite striker even though he came in as a grappler.

Chartier: With Max, it’s his durability and his pressure. He can take shots — you never see him hurt, really — and he always keeps coming. Over five rounds, that wears people down.

Chartier: I think Max has got to get in early on him like he did the last fight, but not take his foot off the gas pedal after the second. I think he’s got to go in there and look for a finish, even if it doesn’t come. He’s got to stay on him, stay in his face, and just weather the storm that is coming back at him. 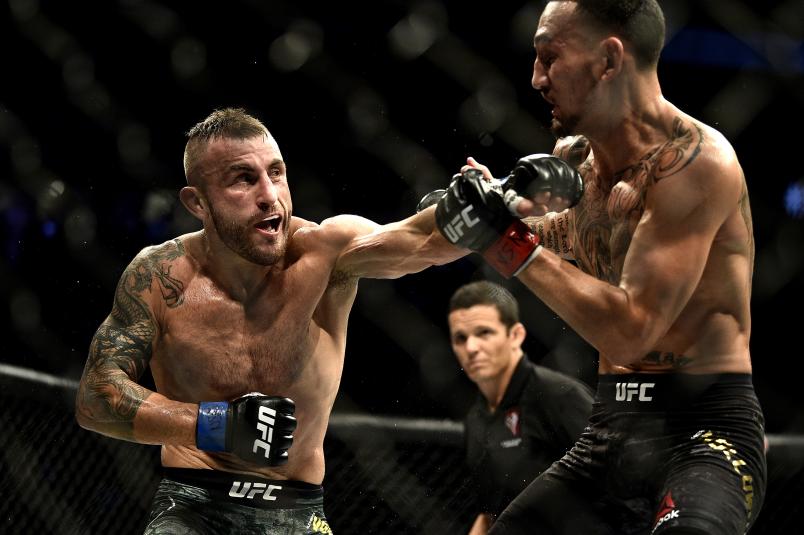 I think he started to do it in the second fight — he was popping off, winning the early rounds — and then I would describe it as — and this is no disrespect to the champ, but Alex didn’t win that fight as much as Max lost it.

He took his foot off the gas pedal a little bit later in the fight thinking he was winning, and it cost him the fight. You can still argue that he won — it was very close, that’s why there is a trilogy — but I think if Max keeps that pressure for five rounds, can Alex handle it?

Krause: If I am Volkanovski, I really focus on kicking that leg again. I feel like he did a great job in their last fight, and I would kick the legs a lot and mix in the takedown. I know he hasn’t really had a ton of success with them, but it’ll keep Max guessing. You can’t allow Max to walk you down, so I think it’s pretty straightforward: kick the legs and mix his game up.

On the Holloway side, this may sound crazy, but I think Holloway has got to — there have been two close fights, and if I’m him, I would say you have to double Alex’s volume. You’ve got to make it so there is no question. Statistically, these guys are super-close and if I’m Max, I’ve got to fight this dude for 25 minutes; make him beat you.

I’m not trying to hear none of this split decision bull**** because you didn’t turn the gas on — make him fight you, make him beat you. The judges should not be needed, and I don’t mean there is going to be a finish because I don’t think either one of these guys can finish the other, but at the end of it, make things so apparent that you’re the winner.

It’s easier said than done when you’re going against Volkanovski, but the effort has to be there.

If there were one thing that was going to significantly impact how this fight plays out — that swings it in one direction or the other — what would it be?

I think Alex does an extremely good job optically — when he gets hit, it doesn’t shake him too much; it doesn’t knock him off balance. He’s always putting stuff out there, touching you, and from a judge’s standpoint, he makes things look good.

For Max, you have to just go. What are you going to do, lose another f****** decision? Well you might as well lose a unanimous decision. There should be no question. There should be no “I thoughts.” If I’m Max’s team, I’m not trying to hear none of this s***. You better be hands on your knees, not any of this ‘I could go another five rounds’ s***. Leave it all out there. 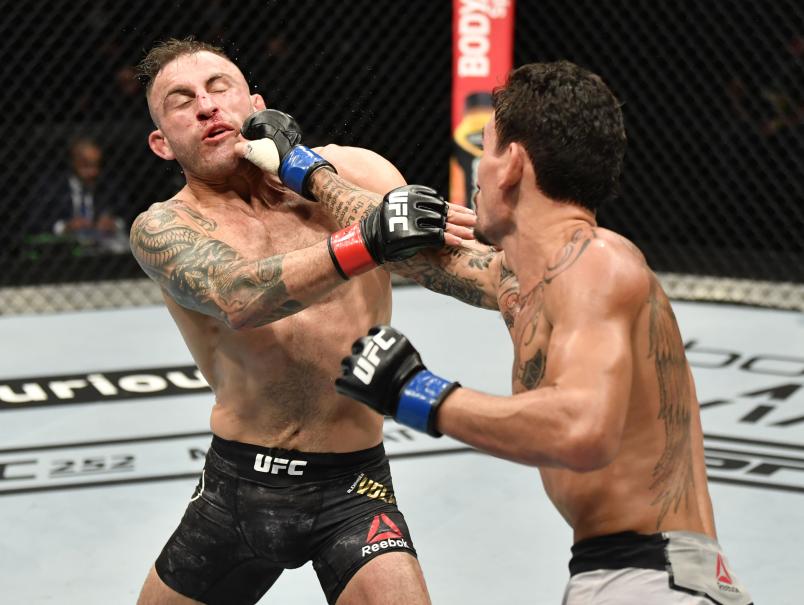 If round three ends and we’re still in a close fight, I’d say, “Max, go get this m*****f*****! Quit MMAing him, and go put him in a phone booth! You’re either going to get rich or die trying. We’re not losing another split decision. You go after this dude and you’re either going to lose clear cut or win clear cut, because I can’t imagine a situation where Max loses another controversial decision — it would be sickening to me if I were on Max’s team.

Chartier: I think it’s the creativity of Volkanovski.

I think you’ve got to keep Max guessing. We know how Max is going to come out and fight, but we don’t know how Alex is going to fight. He’s got really good coaches behind him, and a good team; I think Joe Lopez is one of the most underrated coaches in MMA.

I’ll be interested to see what he does this fight and that will have a big impact on how this fight goes because now instead of Max coming out and being like, ‘This is round 11; let’s go!’ it’s more like, ‘This is round one and he’s doing something different.’ So will Max take a couple rounds to adjust to what is coming at him because he’s not that comfortable with it?

Chartier: What I’d be looking for is whether Max is willing to make adjustments. He fights the same every single fight, he doesn’t make a lot of adjustments, and it’s worked, so why change it?

Is Max just not ‘pedal to the metal’ anymore because he’s trying to be safer? I don’t think he’s slowing down so much as he’s trying to be more mature and not be in wars that he doesn’t need to be in; he thinks he can cruise through rounds that he’s winning.

Any time he wanted against Yair, he could breeze through him. When he decided ‘I’ll go now,’ he had his way with him. When he took a step back and waited on the kicks, Yair was able to make it look closer, and he kind of did that in the second half of this fight with Volkanovski.

So is Max going to make that adjustment and realize he’s going to go back to being ‘Pressure Max.’ Is Max willing to change his ways to win these fights or is it going to be the same dominant Max that isn’t as dominant anymore because the division has caught up?

When you’re 23 minutes in and you’re tired, you’re beat up, and you’ve got a cut over your eye, who wants it more?

James Krause is the head coach at Glory MMA & Fitness, the Missouri-based fight team that includes emerging talents Jeff Molina and David Onama, and is the new home of former flyweight champ Brandon Moreno, who faces Kai Kara-France for the interim flyweight title later in the month at UFC 277.