CM Punk in the UFC: The Buzz Continues

With the recent signing of former WWE star CM Punk, here's a special collection of Pro-wrestlers in MMA. Watch on 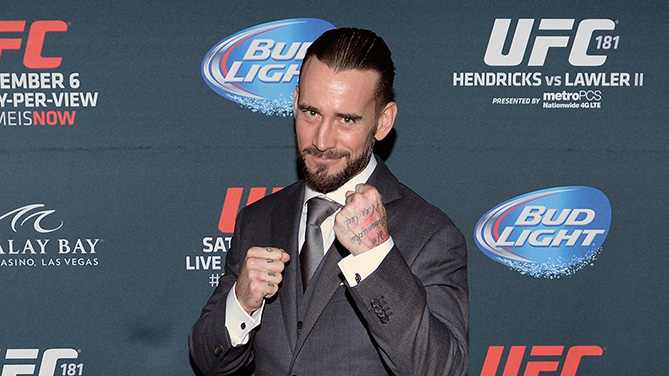 Nearly a week after the announcement that former WWE superstar Phil “CM Punk” Brooks was entering the world of MMA and joining the UFC roster, the buzz hasn’t died down at all, with fans, pundits and fighters all debating this hot button topic.

On Wednesday night, Brooks visited with FOX Sports Live’s Jay Onrait to discuss his status as the most talked about UFC fighter who has yet to step into the Octagon.

“I'm a polarizing figure,” he said. “I wouldn't have it any other way. People either love me and they want to see me succeed or they hate me and they either want to be part of my demise or at least watch it, and I'm gonna just ride that wave.”

Many were excited about the announcement during the UFC 181 Pay-Per-View broadcast, as they look forward to seeing what the former pro wrestler can do in the UFC in 2015, while others trashed the idea, wondering how someone without a significant martial arts, boxing or wrestling background can expect to compete with elite level fighters in the Octagon. Brooks, 36, took the praise gracefully and the criticism with just as much class. So when asked by Onrait if he deserved this shot, he said “I'm not really gonna say that I do deserve it. I think time will tell if I deserve it or not. Respect has to be earned, not just given. I very much understand that and I understand the perspective of a lot of the fighters. I just roll with the punches, I take all the positive stuff and leave all the negative stuff behind.”

As Brooks declared last weekend and reiterated on Wednesday, he will likely compete at middleweight, but he is still undecided as to where and with whom he will train for his debut. He did make one promise though.

“I think I have a lot to offer MMA. I'm going to be an awesome student and I want to learn as much as I possibly can from a multitude of different people.”

With his first fight still far in the future, no opponent has been chosen to face Brooks, but speculation has already been running rampant on Twitter.

“I think it's too early to tell,” Brooks replied. “If they (the UFC) do know, they haven't told me, but I always like a good surprise, so I guess we'll just wait and see.”

Wait and see. That’s the attitude of many when it comes to CM Punk in the UFC, but one thing’s for sure: as far as the Chicago native is concerned, he’s all in and he’s coming to win.

“I don't think you can approach anything with such a strong fear of failure that it would prevent you from doing anything,” he said. “There's a big chance I fall flat on my face on this and it will be in front of the entire world, but that's never stopped me from attempting to do anything.

“The bottom line is, I'm gonna show the world what I'm made of,” Brooks continued. “I believe in myself, this is a dream of mine, and I'm chasing it. So win, lose, or draw, in a lot of ways I've already won. I'm putting myself out there for the world. I'm a raw nerve and everybody gets to come on this ride with me.”