The wait is just about over.

Next weekend – nearly two years after his signing was announced and six months from the time they shook hands and shared pleasantries inside the Octagon – former WWE superstar CM Punk will finally step into the Octagon for the first time, squaring off with Mickey Gall, the ambitious upstart who turned Dana White’s attendance at his professional debut into a golden ticket to the UFC.

Easily one of the most-high profile bouts between competitors with two combined fights to their name, the anticipation and scrutiny surrounding this fight has taken on a life of its own, with fans, media and casual observers all waiting to see how the 37-year-old rookie will do when he steps into the UFC cage for the first time.

RELATED: Watch first 2 episodes of 'The Evolution of Punk' - A Little Bit Crazy & The Ground Up | Punk's teammate Anthony Pettis on rise in latest UFC rankings

While opinions abound about the fairness of Punk making is pro debut at the highest level in the sport -- comparisons to former multiple-time world champion boxer James Toney’s haphazard foray into the cage with Randy Couture have been made -- Punk has maintained from the outset that venturing down this path has always been about chasing a dream and testing himself, not about making a statement or proving anything to anyone other than himself.

“If I step foot in the Octagon, I’ve already won,” said Punk, who has spent the last 18 months preparing for this bout under the watchful eye of Duke Roufus at his gym in Milwaukee, Wisconsin. “I’m doing something that a lot of people think I couldn’t do.”

While next Saturday’s fight and the long hours spent in the gym leading up to it have been intensely personal, Punk is also aware that people are living vicariously through his transition to mixed martial arts. He hopes his willingness to go all-in on something he’s passionate about inspires them to do the same.

“Do what you want in life; find something you love to do and do it for a living,” the man once billed as “The Voice of the Voiceless” during his professional wrestling days said. “Don’t let people tell you you can’t do something. Life’s too ****ing short to not enjoy it, to not have fun every day, to not do what it is that you want.” 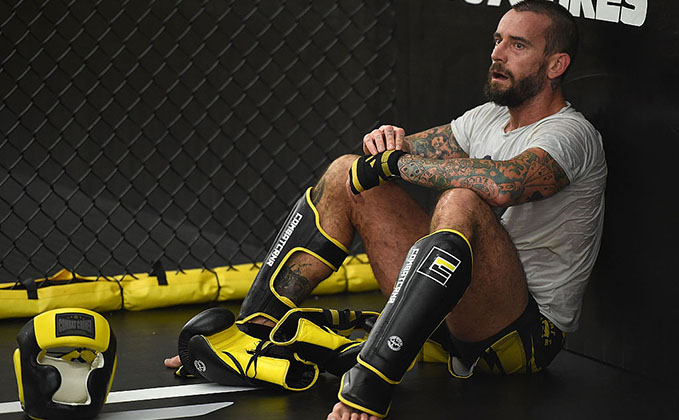 The fact that the vast majority of the questions on Thursday’s conference call were directed to Punk underscores how grand an opportunity this is for Gall, 24, the New Jersey native who called out Punk when the UFC president was filming an early episode of his web series Looking for a Fight late last year.

His moxie earned Gall a first look in the Octagon earlier this year against Mike Jackson, and after dispatching “The Truth” in 45 seconds, the young prospect went face-to-face with the man he’ll face next weekend at the Quicken Loans Arena.

Just as Punk harbors no delusions of entering the cage and instantly being a UFC champion, Gall has made it clear from Jump Street that his intent in calling out Punk has been to expedite the process of earning a place on the UFC roster, citing veteran training partners and regional standouts Sean “Shorty Rock” Santella and Andy Main as two talented competitors still waiting for their shot on the big stage despite outstanding resumes.

For Gall, Punk was a means to an end, and if he picks up a victory next weekend, the ambitious young welterweight has no desire to be coddled by the UFC going forward.

“I don’t want guys to be brought in on my account; I want to fight the best in the world,” Gall said, inadvertently dropping one of Punk’s former WWE monikers in the process. “I think the UFC has the best in the world. Big names make nice trophies and I want a bunch of trophies.”

While some will argue that the anticipation for this fight has cooled as more than a year has passed since Punk’s signing and injuries have delayed his debut, the buzz is once again growing to a fever pitch as the bout draws closer and the FS1 documentary series The Evolution of Punk chronicles the former wrestler’s journey to the Octagon.

“I think a lot of people are very excited about this,” Gall said of the anticipation surrounding the bout. “We’re not going to put on and pretend to hate each other. I think there is an appropriate amount of buildup and I know we both are.“

“I don’t see the need for it,” Punk said when asked about the lack of WWE-style fight promos heading into this bout. “I’m not trying to talk people into the building on this one. The allure is the fact that it’s happening and the story writes itself. It’s not a fabricated thing where I need to create some drama between me and Mickey.

“We’re gonna fight; that’s the beauty of it.”