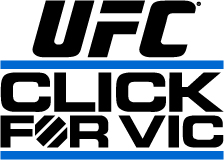 Melbourne, Australia – The Ultimate Fighting Championship® today launched a social media campaign aimed at engaging Australians to ‘Click for Vic’. In its efforts to change the current state of mixed martial arts (MMA) legislation in the state of Victoria, the UFC has created ‘Click for Vic’ Facebook and Twitter accounts aimed at garnering public support to help bring a global UFC event and further MMA grassroots development to a key market.

While professional mixed martial arts is sanctioned and regulated or self-regulated in all Australian states and territories, two states will not allow competitions in a fenced-in enclosure such as the UFC’s Octagon®. Victoria and Western Australia are the only two places in the entire world where professional MMA competitions must take place in a boxing ring rather than an Octagon.

The Octagon is designed to ensure the safety of the athletes, officials and spectators. The fencing keeps all high-impact action contained securely inside the competition area. The image of the sport, with its ‘cage’, is purported to be the reason behind this entirely subjective legislative decision, a move that completely overlooks the key issue of fighter safety. MMA fighters competing in a boxing ring have often been thrown through, under or over the ropes, a significant safety issue for not only the athletes but also officials and spectators. At the same time, a boxing ring, with its four corners, provides a strategic advantage to certain fighting styles over others. In contrast, the eight-sided Octagon is designed to be style-neutral, favouring no combat discipline over another to provide the ideal venue for fair competition.

The UFC is keen to contribute and support any initiatives to bring consistent regulation to MMA and will continue to seek opportunities to present a fact-based and objective perspective to the sport of MMA in Australia.

“This year alone, the UFC will hold more than 30 events around the world and close to 400 individual competitions, all held in a safe, fenced-in enclosure,” said Tom Wright, UFC Director of Operations for Australia, New Zealand and Canada. “Our first priority is the safety of our athletes and what we won't do – and never will – is hold an event in a boxing ring.”

“We’ve held successful events around the globe, including four in New South Wales and Queensland,” he continued. “Victoria and Western Australia are just as anxious and deserving markets – we want to bring the UFC to them.”