"We go out there knowing I fight every fight like it could be my last." - Clay Guida 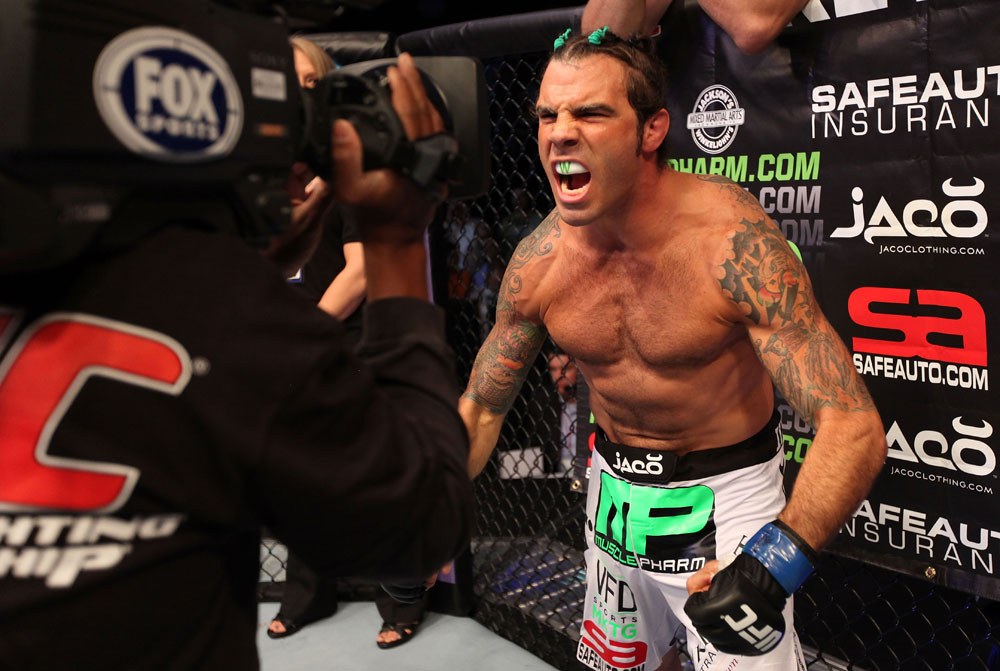 For one of the rare times in his life, Clay Guida was on his couch between hours of slumber when the call arrived. His junior college wrestling team at William Rainey Harper College had a shot at a national championship and a teammate was 10-15 pounds overweight. A week before national qualifiers, Guida had lost a wrestle-off to be on the U.S. National team and his weight fluctuated, so the call from his coach was a concurrence of good luck and bad timing.

Guida’s phone rang the day before the national qualifier. He was asked if he can make weight. Weighing at 160 pounds, Guida had wrestled at 149, so he deduced the challenge was just too daunting, even for someone whose motor could replicate the RPM of a Formula One. Assuming a drastic weight cut was unrealistic at the time, Guida passed on a challenge for one of the few times in his life.

To this day, the tinge of regret that pains the UFC’s current featherweight contender, one who was on the doorstep of a lightweight title shot, is unrelenting – and highly inspiring.

“I kind of gave in and didn’t even give it a try,” Guida said. “I was on the couch when I got the phone call, sitting there eating and didn’t even try. That really motivated me after that to not let something like that happen ever again. It was tough for me to handle, knowing if I would have maintained my weight I could have gone in there and maybe helped a little more in the national title and been more a part of the team than getting bumped the last week of the season.

“That’s always motivated me, especially in this weight cut and this diet now. I’m going to make good on it, the commitment I made to myself, my team and my family.”

A three-sport athlete at Johnsburg High School, Guida’s career took awhile to take traction, but the seeds to what’s been a memorable journey through the world of Mixed Martial Arts were rooted by osmosis. He shared the same room with a group who knew what it took to become JUCO champions in 2001 and has parlayed it into a UFC experience that’s – win or lose – pushed virtually every opponent to the brink of their limits.

Such simple words were spoken deep into preparation for The Carpenter’s inaugural UFC bout as a 145-pound contender this Saturday at UFC on FOX 6 against Hatsu Hioki. Hailing from Japan and heralded as the top featherweight outside of Zuffa’s boundaries, Hioki’s UFC experience has been lukewarm at best. He managed a split decision over George Roop at UFC 137, looked awesome in defeating Bart Palaszewski at UFC 144 in Saitama, Japan, but comes off a loss to Ricardo Lamas at UFC on FX 4 last June that dealt a body blow to his chances at a featherweight title shot.

That shot at what’s been elusive gold is up for grabs for Guida. He chose the dropdown after a run as a UFC lightweight with notable victories over Nate Diaz, Takanori Gomi and Anthony Pettis mixed with defeats to Diego Sanchez, Kenny Florian, Benson Henderson and Gray Maynard. A title at 155 may have evaded him, but Guida insisted his road there didn’t come to an end, but rather made the decision to create a new beginning.

“I absolutely did not hit a ceiling at lightweight,” Guida said. “Once you hit a ceiling in life, you need to kind of rewind and we haven’t done that. Anyone who’s seen my fights, they’ve seen we’ve never fought the lesser competition. We’ve always gone after the bigger and better guy. That’s not going to change now in the featherweight division. It had to do with seeking out another challenge, so we figured we shed a few more pounds off and test the waters at featherweight.”

If you choose to spar with Guida, you better be in triathlon shape. He doesn’t walk the aisle, he runs in place slapping hands with fans. Until selecting a more calculated approach against Maynard, Guida has come at his opposition with the fury of an elephant gun, hair dancing to the beat of a hurricane, difficult to read, and inexorable in both his striking and ground game. After his frenzied split-decision loss to Sanchez, one where Guida took an onslaught of punches and survived a fierce head kick that would have knocked a lesser man out cold, Guida still had the energy to run in place upon Bruce Buffer’s decision announcement.

How is that humanly possible? Simple, says Guida, good old work ethic – along with that painful reminder of what it feels like to not even try.

“The hard part is getting the skill set down,” Guida said. “I wouldn’t say it’s easy, but if you can’t go out there and push yourself to your limits and get yourself in shape, then you’re in the wrong sport. If you can’t go hard for 15 or 25 minutes, you’re not a mixed martial artist. It’s not getting through the workouts. It’s what you get out of your workouts.”

An average wrestler in high school, Guida found himself at Harper, and sharing a room with multiple state champs and medal winners was critical to his growth as a wrestler and a man. He looks no further than the story of his Johnsburg High teammate and best friend, Jared Karlen, a successful freestyle and Greco-Roman All-American national finalist. The first day at nationals, Karlen dropped a match to the eventual individual national champion before winning his next four. The next day called for a weigh in and Karlen had to burn eight to 10 pounds by eight in the morning. Guida helped by running in tandem up and down a 12-story hotel stairwell for 45 minutes in three layers of sweats – and then came a date with the treadmill.

After making weight, Karlen won four more matches before losing a consolation match, but the vicious cycle led to him losing the weight and helping Harper to a national title.

“Seeing his motivation really drove me in a positive direction,” Guida said. “I know I should have been right there with him, cutting that weight for my own good, to wrestle in the second day or that tournament too. That was a huge point in my wrestling career. My season was over, but to see him … he could have just thrown in the towel and blown weight the next day, and we wouldn’t have won a national title.

“Without him, I wouldn’t have this national championship ring on my finger as a reminder to never be satisfied. To win a national championship is a reminder to me to seek out the best training and always look for the best teammates and keep working hard towards my goal. It motivates me to win a UFC belt at featherweight or lightweight, or whatever weight it might be, and to help those around me.”

Defeating Hioki is motivation enough. Having to do it off a roundly-criticized performance against Maynard during which he chose tactics over excitement serves as new incentive. If anyone deserves a mulligan, it’s Guida. Five Fights of the Night, two Submissions of the Night, and Fight of the Year honors in 2007 (Roger Huerta) and 2009 (Sanchez) are proof solid that Guida is off the couch for good.

“Some fights are barnburners and then you’ve seen me using a little more tactical approaches in these past few,” Guida said. “We’ve been criticized, but we finish fights, we’ve beaten some top contenders and we’ve lost to some of the best. But we go out there knowing I fight every fight like it could be my last. That’s how I played football every down. That’s how I practiced in football growing up. That’s the approach I take in life, to get the most out of every day.”