Veteran Fan Favorite Always Looking For The Next Challenge.
By McKenzie Pavacich, On Twitter @mpavacich_ • Apr. 22, 2022

At this point, as expected, Clay Guida has his fight week ritual down to a science.

One day he goes for a run down the Las Vegas strip, past the Mandalay Bay to “pay homage to where it all began,” the next he sits in the oh-so-familiar UFC.com interview chair to talk about the things that have defined his career: Hall of Fame-worthy fights, legendary finishes and, of course, lots of wrestling.

“I’m always about bringing along the past — whether we had our hand raised or not, it’s all about the journey and who’s been a part of that journey with me,” Guida said ahead of his 56th professional fight this weekend at UFC Fight Night: Lemos vs Andrade.

“I haven’t gotten here by myself. I’ve had such an amazing support system: so many awesome coaches, teammates, instructors, trainers, family, friends, and fans that have been a part of it. The UFC, the people behind the scenes that don’t get the recognition, all of these people are the ones I do this for. They got me here and they’re the ones who are gonna keep this going.”

After an unbelievable, albeit vintage-Clay-Guida, showing in the Octagon just over four months ago, which saw “The Carpenter” submit fourth-degree Brazilian Jiu-Jitsu black belt Leonardo Santos, it’s difficult not to let the mind wander to what Guida could possibly have up his sleeve for this next one.

After securing his first win by finish in nearly four years — a submission which also earned him his tenth career fight night bonus — Guida is set on reminding everyone just how dangerous his ground game really is.

“From white belt to black belt, it doesn’t matter,” Guida explained when asked how it felt to lock up his coveted rear-naked choke against a multi-time IBJJF world champion in Santos. “I’m a white belt, but I’m a wrestler. That’s the creed that I live by. Wrestling is what won that fight that night, and that’s what’s going to win us the fight on Saturday. I don’t care what you’ve done, what your accolades are outside of the cage. Once you step into that Octagon, it’s a whole new ballgame.”

But surely, you have to feel good about that last performance, right Clay?

“It was far from spectacular (laughs). That’s how I am, I’m never satisfied. We have fun in everything we do, in our training, in this journey, and every time we step in the Octagon, we go in to put on a show. It’s about challenging myself and making the fans and the crowd and the UFC want more. And that’s why we’ve been here for so long. Come Saturday night you’re not going to see anything different. Another high energy, action-packed Guida caveman fight.”

This time against UFC up-and-comer Claudio Puelles, Guida will look to impose his wrestler’s will once again to wear down his opponent before ultimately going for the finish — a strategy similar to his fight against Santos. 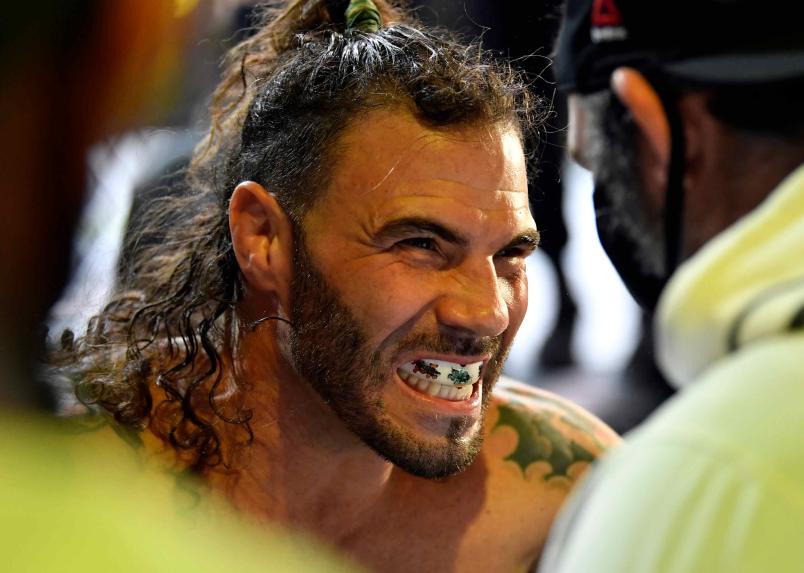 “They’re very similar body styles, similar fighting styles,” Guida said. “They’re both southpaws, tall, rangy, lanky, both highly touted guys on the ground, they can both throw hands. We’re putting a veteran in there against an up-and-comer, and I’ll always take the experience.”

On paper, Guida’s six-plus hours of Octagon time is hard to ignore in this matchup, especially when you consider his professional experience as a mixed martial artist sums up to being more than four times that of the Peruvian’s.

But even when faced with that fact, Guida has managed to find the challenge it poses to him.

Would he be Clay Guida if he said anything different?