"He’s got three knockouts in a row, but that’s the last knockout he’s
gonna get for a while. Come August 31st, he’s gonna see what a veteran
at 145 is all about." - Clay Guida 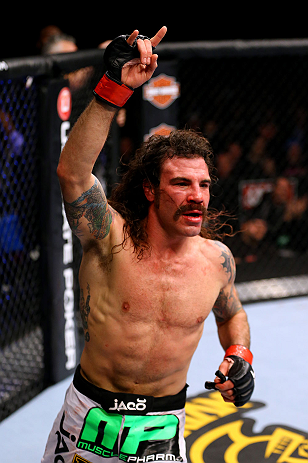 At 31, Clay Guida has learned to let certain things go. It’s part of being 31. So when he hears criticism about his last two performances in the Octagon, a loss to Gray Maynard and a win over Hatsu Hioki, he doesn’t allow it to affect him.

“I don’t let that stuff get to me,” he said. “I don’t get on the computer, I don’t follow the forums or any of that stuff, but I obviously hear about it. It doesn’t shake me though. I’m out there to have fun, and I’m out there to win and display my skills that I’ve been working on in camp. I stick to the game plan and I’m out there to better myself and challenge myself. That’s what I’m here to do.”

And since his UFC debut in 2006, he’s been doing just that, winning 10 of 17 bouts and picking up eight post-fight bonuses along the way. You would think a track record of excitement would have earned the Illinois native a mulligan or two in terms of less than thrilling bouts, but apparently not, as his five round split decision loss to Maynard in June of 2012 kicked off a torrent of abuse sent in his direction.

Yes, it wasn’t Guida’s best performance, but if you look at the fight again, in the first half of the fight he utilized an effective stick and move strategy against “The Bully.” It’s just that the second half saw more moving than sticking. Guida stands by his attack though.

“Talk about frustrating your opponent,” he said. “Look at his (Maynard’s) hand gestures; he was flipping me off, he ran at me, I moved and he ran headfirst into the cage. Gray was one of those guys where we knew it was going to be a tough fight when he first came into the division. If we fight him, it’s gonna be a grind. But we outwrestled him, I believe I outstruck him, and I think I embarrassed him at some parts of the game. He couldn’t take me down, and that was when I thought I was gonna have to fight off ten takedowns and get up ten times. He didn’t take us down once. But that’s what happens when you leave it to the judges.”

The loss prompted a long-pondered move from lightweight to featherweight for Guida, and though he won his first bout against Japan’s Hatsu Hioki in January, it was another split decision and another less than Guida-esque performance.

“As far as my first fight at ’45, I took on one of those competitors that doesn’t make anyone look good,” he said. “If you look at all his fights, he (Hioki) doesn’t have any exciting fights really, no one ever looks impressive against him, and I’m not using that to say that’s why the fight wasn’t exciting. He just had a different style of striking and it made him hard to deal with. He’s a very good grappler, and striking wise he was able to keep me at distance with his jab, so I was forced to use my wrestling to take him down and use ground and pound. I was aware of his submissions, and it wasn’t my most exciting fight, and I’m definitely not happy with my performance, but fighting a top ten guy who was also a former number one contender before he lost to Ric Lamas, I think it was a step in the right direction at featherweight.”

And that’s all that matters at this point. You win, you move forward, and you get another chance to get the fans roaring again. This Saturday, Guida gets a top five contender in Chad Mendes, and he can’t wait to get back in there.

“I’m going out there with a skill set for Chad Mendes that he hasn’t seen before,” he said. “He’s gonna see some things that are very unexpected from my last couple fights and my other fights in the UFC.”

But what does Guida expect from Mendes, a fighter who has gone from wrestler to knockout artist in the time after his title fight loss to Jose Aldo?

“We expect a guy that’s gonna try to come out and knock my head off, and I expect a well-rounded Division I wrestler,” he said. “As far as accolades go, he’s got the highest ones of any wrestler that I fought, and I’m looking forward to the challenge at hand. I couldn’t be more excited about it, and he’s gonna see the plan that my coaches put together for me. I expect him to come out guns blazing. He’s got three knockouts in a row, but that’s the last knockout he’s gonna get for a while. Come August 31st, he’s gonna see what a veteran at 145 is all about.”

It’s clear that the criticism hasn’t dulled Guida’s confidence, and the way he sees it, the reason is a simple one.

“I see the prize at the end, and that’s getting that featherweight belt,” he said. “I know what I set out to do, what I put my mind to do, and with the hard work every day, I’m gonna be champion one day. People want to call me a journeyman, they want to call me a steppingstone, one day they’re gonna call me champ. Mark my words. It’s just a matter of time.”