"We’re not gonna let him jump off the cage and implement his game plan. We’re moving forward, we’re gonna push him around the cage and dictate the pace." - Clay Guida 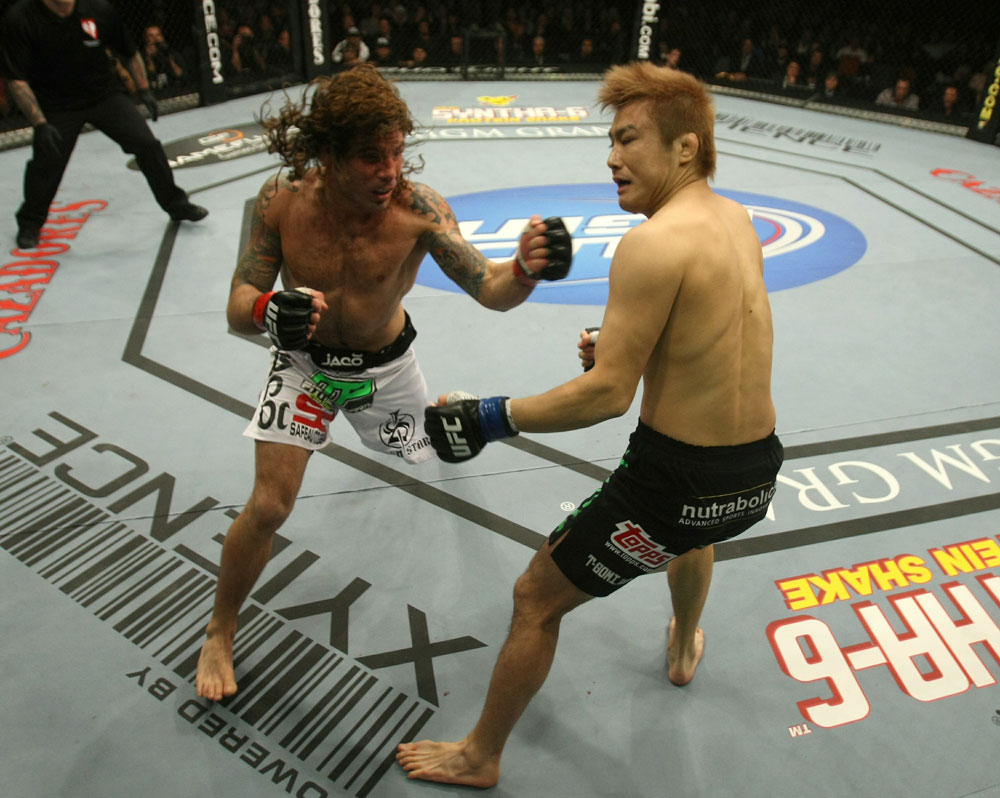 He’s left the crosses, prayer books, and holy water at home, but Clay Guida still has some demons to exorcise this weekend in Las Vegas.

Entering the Octagon at The Palms for the third time, he must not only address his opponent, former WEC lightweight champion Anthony Pettis, but the ghosts that inhabit the Pearl Theater, where he has engaged in two of the most dramatic fights in UFC history, but also walked away with defeats in both.

“They were two Fight of the Years, but two losses, and we’re gonna make good on this one,” said Guida. “The third time’s the charm and we’re gonna kick those ghosts out of the Palms.”

It’s the little things that matter to a fighter sometimes - wearing your lucky trunks, coming in to the same song every time, or just having that extra bit of motivation to push you to the next level. Guida has plenty of motivation, as he’s riding a three fight winning streak in a fiercely competitive division, and he’s fighting on national television once again. But it’s the idea of erasing his losing streak in The Palms after his defeats against Roger Huerta in 2007 and Diego Sanchez in 2009 that has made him even more focused than usual.

“I wouldn’t say I’ve had bad luck; I just haven’t had my hand raised out there,” he said of the Huerta and Sanchez fights. “They were amazing, dramatic fights, about as dramatic as you can see – this crazy whirlwind, knock ‘em down, drag ‘em out, blood everywhere - and they’re fights that people will remember forever. And to me, a true champion is someone that accepts a loss and then learns from it. But on the other hand, I’m never satisfied. Those were great fights, but I made one mistake in each that I paid dearly for.

“The Huerta fight, I was up and I could have taken a nap in the third round and not even showed up and won the fight. But that’s not what we’re about. We’re about going out and trying to finish fights. Against Diego Sanchez, I paid dearly because I backed straight up and I let him dictate the pace from the beginning. The first minute of the fight we got into that rock ‘em sock ‘em robots thing where he kicked me in the jaw, punched me, kneed me, cut me. It took me a little while to get into my gameplan, put him on his back and ground and pound him. Most fans really don’t think about the wins. But being on the inside, I’m more about having fun and getting my hand raised, and I’m kicking those demons out come June 4th.”

Following the split decision loss to Sanchez, Guida was still out of sorts six months later as Kenny Florian submitted him at UFC 107, but since then “The Carpenter” has been unstoppable, finishing all three of his opponents. More important than the wins though, is the idea that he’s found the balance between being exciting and still sticking to a gameplan and fighting smart. Now he’s gone from being simply must-see TV to a serious contender for the lightweight title.

“I’ve matured in my training and I’ve brought some skills to the forefront that I didn’t really know that I had before,” he said. “I have a lot more confidence in my takedowns, more confidence in my submissions, and people have seen a lot of head movement in the last couple fights. I busted up Rafael dos Anjos’ jaw and took him down, I submitted Shannon Gugerty, who was a high-level brown belt; (Takanori) Gomi can punch through a cinder block and I outstruck him, put him on his back and did what we do, which is punish our opponents and make them pay.”

The obvious culprit of the “new” Guida would be his relocation to Albuquerque to train with Greg Jackson and his renowned bunch of standouts. But you may also want to look to an additional source as well – Guida’s living accommodations, a 40 foot RV that has become more than a home away from Illinois, but his own personal sanctuary.

“I guess it’s for peace of mind, and it’s a quiet atmosphere,” he said. “It motivates me. (The way I see it) I’m always on the road to victory. No matter where I’m at, as long as I’ve got my Winnebago, I’m always focused on my goal and my dream, which is having that strap around my waist.”

In recent months, Guida’s RV adventures have become almost as newsworthy as his fighting, a bizarre circumstance that comes with being a free thinker who isn’t too concerned with what people think. So why have people latched on to this aspect of his story?

“Maybe it’s because it’s such a simple idea,” he said. “‘Oh Guida, the half-caveman lives in a van; how fitting.’”

He laughs, his personality outside the cage a polar opposite from what it is when the bell rings. Inside, he’s a dervish intent on making his opponent’s evening as miserable as possible.

That’s not to say Guida is dismissive of the talented youngster from Milwaukee, who captured the attention of the world with his off the cage kick in his WEC title-winning effort against Ben Henderson last December. Guida promises no such antics from his end on Saturday.

“That’s not the dude’s style,” he laughed, paying tribute to “The Big Lebowski” in the process. “I feel better with both feet on the ground and that’s what we’re gonna do. We’re gonna take his feet off the mat with our own will. We’re not gonna let him jump off the cage and implement his game plan. We’re moving forward, we’re gonna push him around the cage and dictate the pace, and I know people say it all the time, but when we do our best is when I come out and strike first and set the pace. I think Ben Henderson, Shane Roller, and all these guys have respected him too much and gave him too much space. We’re gonna shut that down from the get go.”

But back to that respect thing, and Guida has plenty of it for Pettis, calling him the “most creative and innovative fighter” that he’s faced. At the same time, he wants to send a message to “Showtime” that “It ain’t the WEC anymore. He fought a five round main event in a potential Fight of the Year, but he fought a guy who respected him too much. Ben Henderson is a very skilled fighter and I don’t think he believed in himself in that fight. It’s gonna be completely different come June 4th. Anthony Pettis is riding a wave, I love watching him fight, and you’re not gonna find a more exciting guy to watch – he just comes up with stuff and goes with it. The guy’s got more of a highlight reel in one fight than I probably have in my entire career. But I’ve got almost as many losses as he has wins, so I’ve been through the fire and I’m gonna show him what it’s all about. He’s gonna look for a way out and I’m gonna give it to him.”

And if a Fight of the Night comes out of it, great. But this time, the most important thing for Guida is winning in the Palms and slaying an old demon.