"I can’t wait to get out there and stop his winning streak." - Clay Guida 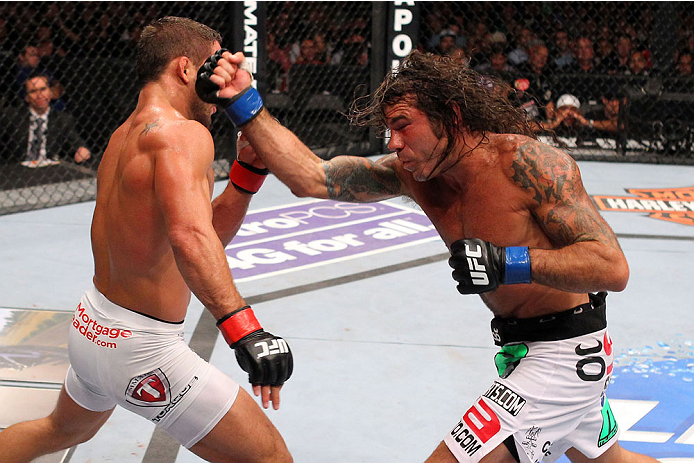 If there’s someone who loves being in the UFC more than Clay Guida, I haven’t run into him yet. So for “The Carpenter” to sit on the sidelines for more than seven months following his loss to Chad Mendes last August, it was nothing short of torture.

“I think the body needed the break,” said Guida of his extended break from the Octagon. “I never need a break. But sometimes the body is quiet, and then sometimes it screams at ya.”

And as the body’s screaming, what is the head doing?

“My head’s screaming back, saying I want to get in there and get back to the winning ways,” laughed Guida, one of the good guys of the game, and one who lives life the way he approaches his fighting – full speed ahead.

That made putting on the brakes a necessary evil, but not something that sat too well with the 32-year-old, who makes his long-awaited return in the UFC Fight Night co-main event against Tatsuya Kawajiri this Friday. Just don’t say welcome back.

Guida does have some catching up to do though, as a four fight winning streak from 2010-11 that was capped off by a victory over Anthony Pettis has turned into a stretch in which he has lost three of his last four. The most painful loss – literally and figuratively – was certainly the one against Mendes, in which Guida was stopped by strikes for the first time in his 11-year pro career.

“I thought it was a very high-paced fight and he had a very good game plan,” said Guida of the bout. “I thought he was gonna come out and try to knock my head off, but he took a different stance and made me chase him and go after him. I had been taking some flack for not having the most exciting fights, so maybe he thought I was gonna come right after him, which I did. I thought it was a good fight, and then I got clipped up against the fence, lesson learned. Stay off the fence against a power puncher like Chad.”

Admitting that he was down two rounds on the scorecards when the end came in the third, Guida does think that he might have received a quick hook from referee Yves Lavigne, but regardless, the call stands.

“I don’t believe I was out, but I definitely was not winning the fight,” he said. “Everyone’s got one of those spots, evidently.”

That vulnerability, as momentary as it might be, doesn’t sit well with a fighter.

What wasn’t good was the aftermath.

“My back started screaming at me,” said Guida, who visited a couple of doctors before getting the bad news from UFC President Dana White. “Dana told me to take some time off, rest up and come back healthy.”

And now he is – healthy and in a fight against Kawajiri that can put him in the featherweight mix with a win. And though Guida is usually always excited about something, this matchup really gets him amped up.

“He (Kawajiri) has been someone I’ve been watching forever,” he said. “Him and (Takanori) Gomi are gonna go down in the books. They’ve fought in every organization, they’ve had success everywhere, and we were excited that even coming off a loss they were letting us fight a co-main event, which is huge. I can’t wait to get out there and stop his winning streak.”

If he does, that’s two wins in three tries, and he will be on the right path to a shot at a title. Guida isn’t necessarily sure that Jose Aldo will still be the man at the top when he gets there though.

“It’s a scramble right now,” he said. “I think it’s just a matter of time before Jose Aldo gets the wrong matchup, a guy like Cub Swanson, Chad Mendes, or Clay Guida. I’m not really up in the top five of the rankings right now, and those don’t matter to me, but it’s just a matter of time. I think Ricardo Lamas could have been right there had he not had such a long layoff and maybe not waited as long. A matchup like Ricardo Lamas is tough for Jose Aldo, but I believe the fact that Aldo was staying consistent played a huge role in that fight. Lamas didn’t get to his wrestling until it was too late. So I think it’s just a matter of time before a stronger, better wrestler like Mendes or a more technical striker like my teammate and friend Cub Swanson gets in there and puts it on him. I think it depends on who’s gonna get the next shot.”

Clay Guida hopes to be back in that conversation soon, but more than that, he’s just happy to be back.

“I love the sport,” he said. “The traveling is great, it’s a lot of fun and it’s taken me all over the world. I still feel like I’m just beginning in the sport, but I look back and I think I’ve been in the UFC eight years now, so it’s been quite a while. It’s just special to be part of the biggest organization in the most exciting and fastest growing sport in the world.”