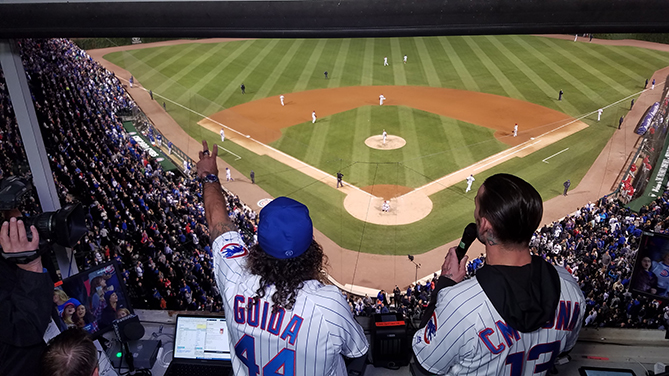 On Saturday the UFC will host its first Pay Per View event in Chicago. But it wouldn’t quite be a real trip to the Windy City without a visit to Wrigley Field.

Illinois natives CM Punk and Clay Guida took a break from their UFC 225 prep to attend a game at the iconic ballpark, with Guida throwing out the first pitch before the Chicago Cubs took on the Philadelphia Phillies.

With nearly 60 friends and family members in the stands Guida had a whole lot of people to impress, but “The Carpenter” didn’t crack under the pressure. He trotted out to the mound and threw a solid pitch that earned a cheer from the Cub faithful.

Later the featherweight veteran teamed-up with Punk and the duo gave their best rendition of the 7th inning stretch classic, “Take Me Out to the Ball Game."

The two knocked the performance out of the park, giving the crowd a spark and while urging the home team to rally from behind. Despite the energy created by the duet the Cubs would go on to lose round one of the three game series, 6-1.

By the end of the evening one thing became clear. Whether it’s the baseball diamond or the Octagon, both fighters will always have support from their hometown.