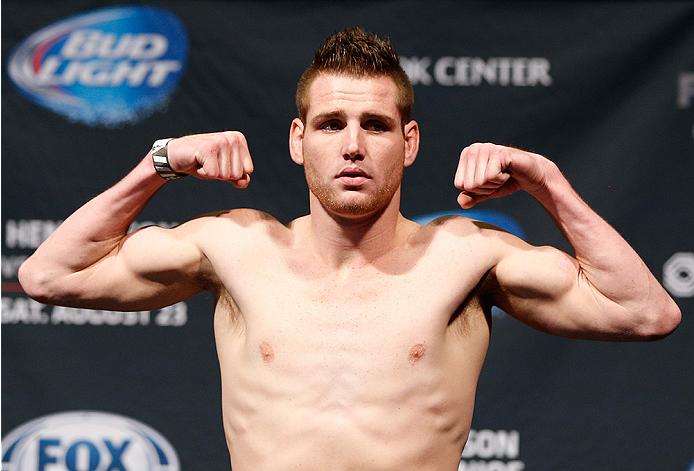 Clay Collard didn’t win his UFC debut against Max Holloway on August 23, but I dare anyone who saw the fight to call him a loser. Accepting the fight on just eight days’ notice against the top 15-ranked Hawaiian, Collard could have packed it in once his gas tank emptied following the first round, but instead, he simply decided to fight until the bout was halted in the third round.

“As far as game planning and all that goes, I just try to make sure I’m the best fighter I can be as a whole,” Collard said of his fighting philosophy. “I don’t really game plan too much, and once my cardio starts to fade away, I just try to turn it into a brawl and make it exciting and hopefully catch him.”

He didn’t catch Holloway, but it was a fun fight to watch from start to finish, with Collard throwing all caution to the wind in as impressive a debut fight someone could have without winning.

“In the first round, I felt like I was beating him to certain things and starting to figure him out,” he said. “I just slowed down too much because I didn’t have the gas. I usually pick it up in the second and third round and that’s where I put dudes away because of my cardio. But with the short notice and me not being in the gym, I just couldn’t pick it up anymore after the first round.”

It could have ended up disastrously for the Payson, Utah native, and though he isn’t happy with ending up with the fifth loss of his pro career (against 13 wins and one no contest), the 21-year-old would do it all over again.

“There’s no hesitation with me,” he said. “I’ll fight anybody, anytime, anywhere. I love fighting. But taking a fight on short notice is one thing if you’ve been in the gym; I had been out of the gym for a month and a half, dealing with some personal things in my life. But when I got the call, I just said ‘I’m down, I’m a gamer.’ I won’t ever turn down a fight.”

That’s no surprise, since Collard has been competing most of his life, first as a wrestler and then as an amateur boxer. And while he was better than average in both, he felt that he wasn’t at the elite level he wanted to be at.

“I started wrestling when I was six years old, and when I was 11 I started boxing,” he recalled.
“Wrestling, I was close to being State champ, but there were always those one or two kids that were that much better than me, and it was the same thing in boxing. There was always that handful of kids that were that much better. And so if I could wrestle the dude that was a better boxer than me or if I could box the dude that was a better wrestler than me, I’d be unstoppable. So I just fell in love with MMA from a young age after watching it, and the first chance I got, I jumped to it.”

Collard turned pro in 2011, and while he’s had his ups and downs, splitting two fights with UFC vet (and one of the best young coaches in the sport) Justin Buchholz and putting on the performance he did against Holloway show that he has potential to go places in the featherweight division. He agrees.

“I feel like I’m one of the best around,” he said. “I fought Max, who’s top 15 right now, on eight days’ notice, with a week of training. I wasn’t happy with my performance, but I was right there with him until my gas tank gave out. With a full camp and me fighting him at my top level, the story could be ‘Clay comes in and beats Max and is up in the top 15.’ But I’m not in it to just be a guy in the UFC. Like anything I do, I want to be the best at it, and this is what I’ve chosen as my career, and it’s something I love and something I’m willing to work harder than anybody else at. Eventually I want to be the top dog, and I don’t see any reason why I can’t be.”

Tomorrow in Las Vegas, he gets a second chance to get that first UFC win in what could be an early Fight of the Night candidate against fellow prospect Alex White. He can’t wait to get back in the Octagon.

“I don’t feel like people saw my true colors and my true talent in that first fight,” Collard said. “They got a taste and they loved it, so this second time around, my hands are gonna start and I’m gonna look for the early finish.”