Claudio Puelles Chose To Live Outside His Comfort Zone

Lightweight Claudio Puelles Has Forced Himself To Live Outside His Comfort Zone To Better His UFC Career, And Continues As He Prepares For UFC Fight Night: Font vs Aldo
By Thomas Gerbasi, on Twitter @TGerbasi • Dec. 1, 2021

As Claudio Puelles prepared for his first Octagon appearance in nearly two years in June, he wasn’t concerned about any ring rust. But what did produce some question marks in his head was the level of his opponent, unbeaten Jordan Leavitt.

“I was a little concerned because my last opponent had some hype behind him,” said Puelles. “I was hearing people say he was gonna submit me in the first round and stuff like that, and I was like, 'Really, I don't think that's gonna happen.' (Laughs) But hearing all this stuff, I was like, 'Is he something real special or what? He's gonna submit me in the first round? That's not easy to do.' But I just went in and shut him down.”

He did, winning a unanimous decision that placed Leavitt in the loss column for the first time as a pro. Ring rust was not a factor for “El Nino,” who credits that end of things to a solid first training camp with the Sanford MMA team in Florida. 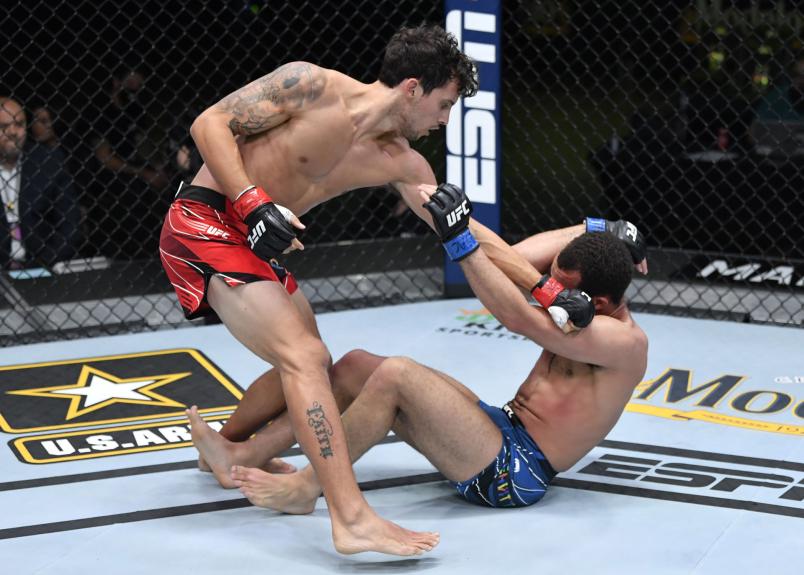 “The biggest part about not being concerned about the layoff is that I felt so confident with my camp,” he said. “A week before the fight I was inside the cage in my gym, and there was such high-level talent with me in that cage. These guys are top level, and I thought the next guy that gets locked in the cage with me is not the level of these guys. I was confident that I was gonna be fine.”

It was the kind of win that not only extended his win streak to three, but that also started a new chapter for a promising lightweight prospect who can finally get on with his career after starts and stops that have limited him to four fights in five years on the UFC roster.

“It's not a number I'm proud of, but it is what it is,” he said. “I'm actually glad it happened this way because I was pretty young back then. I was very raw. I was only 20 and I was making dumb mistakes even though I had a lot of maturity to actually make it to the UFC that young. Now it's a different story. I became the athlete I wanted to become when I was a kid. Nowadays, I am proud to say I deserve to be here and I'm getting better every day and every fight.”

Back in 2016, Puelles was a young gun from Lima, Peru who tore through the competition on season three of The Ultimate Fighter Latin America before being upset in the finals by Martin Bravo. He wouldn’t be back in the Octagon until 2018, when he thrilled fans with a come from behind submission of Felipe Silva. But it was another 16 months before he defeated Marcos Mariano. That September 2019 win was his last appearance until the Leavitt fight, and it was between those bouts that he was determined to turn things around and give this his best shot.

“Being back home, I was in my comfort zone, I have to admit,” said the 25-year-old. “My fire wasn't off, but it was low. Then I got here (to Florida) and I see all the fighters training every day at the gym and my flame just went crazy. I started putting the work back in and I haven't stopped in 10 months.”

For Puelles, it was going to either be California or Florida when he made the move to the States, and when he chose the Sunshine State, a natural fit was with Sanford MMA, where he’s been since February.

“I always trained at my small gym at home, which took me pretty far, so I'm very proud and thankful for everybody that helped me out down there,” said Puelles. “They did the most they could and I was always happy, always trying to make my camps better, but even my coaches were telling me I had to make the move and deep down I knew it.

"I've won my last two fights by decision so it would be nice to add a finish."@ClaudioPuelles7 is excited for the opportunity to put on a show against Chris Gruetzemacher at #UFCVegas44 🔊⬆️ pic.twitter.com/pqzwI5fBij

“So, I had a two main options. One of the other states I wanted to go to was California. I wanted a place where I get good training and I get a good, quality life. I've always lived close to the beach in Peru, so I didn't want to change that. I like the sun and being outdoors - it's a good way for me to get rid of stress and maintain a happy lifestyle. So those were my two main options, and thinking about it, California was really expensive, and I only knew a few people. My dad lives here in Florida, and I lived with him here for two years when I was younger, like 14 or 15, so I had some training partners from when I was living here, and I decided I wanted to be here and I made the move, and I'm very glad I did it. I was very happy with the gym.”

On Saturday, Puelles fights for the second time in a year for the first time since 2014 when he meets Chris Gruetzemacher, and it’s an important one for someone who is pretty important to the MMA culture of his home country. That’s something he doesn’t see as pressure, but more of an honor.

“Kids still message me all the time, saying I'm like their idol and they want to do the same things that I did,” said Puelles. “Coming from a smaller country and getting to the UFC young and getting a winning streak and maintaining yourself in there, they see opportunity. It might seem like it's impossible, but seeing someone do it from their own country, they see it's possible. I'm just happy that they can refer to me as someone who inspires them, and that doesn't put pressure on me. I don't really think about that all the time, but when I do, I feel happy more than feeling pressure.” 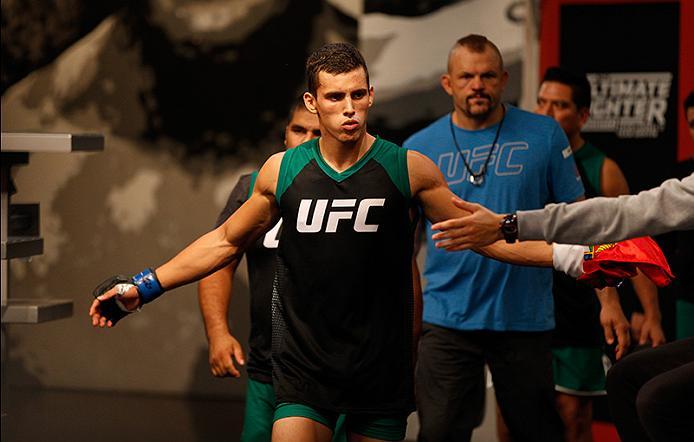 Claudio Puelles prepares to enter the Octagon before facing Jose David Flores during the filming of The Ultimate Fighter Latin America: Team Liddell vs Team Griffin on May 20, 2016 in Buenos Aires, Argentina. (Photo by Gabriel Rossi/Zuffa LLC)

But as much as he hopes his ability to keep winning helps Peru’s MMA scene, Puelles knows that this is an individual sport, and that his first priority is to fulfill his own dreams.

“I want to achieve my own goals,” he said. “I don't have that fake killer attitude or anything, I'm very focused on what I want to achieve. I'm striving towards something I always wanted. It was a promise I made to myself when I was a kid, and I've been working ever since. It's been over 10-11 years since I started training and I get to live every moment, and since I'm here in Florida, I became an athlete.”