Check out some of Claudia Gadelha's best moments ahead of her matchup with Angela Hill this weekend.
By E. Spencer Kyte, on Twitter @SpencerKyte • May. 15, 2020

Claudia Gadelha has spent the entirety of her UFC career as one of the top contenders in the strawweight division.

Even before she first set foot in the Octagon, fight fans were well aware of the talented Brazilian who trained with the legendary Nova Uniao team under Andre Pederneiras alongside longtime featherweight champ Jose Aldo, former bantamweight titleholder Renan Barao, and a host of the top talents to emerge from the South American MMA hotbed.

A third-round stoppage victory over Ayaka Hamasaki in the co-main event of Invicta FC 6 put her in line for a championship bout against Carla Esparza, but an illness ultimately forced her out of the matchup. Less than six months later, the UFC opened up the women’s strawweight division. Gadelha was originally going to be a part of the cast on Season 20 of The Ultimate Fighter, which was used to crown the division’s inaugural champion, but instead, she skipped the reality television competition — which was ultimately won by Esparza – and ventured straight into the Octagon instead.

As she readies to make the walk to the cage to face Angela Hill this weekend in Jacksonville, Florida, let’s take a look back at some of the key moments from Claudia Gadelha’s career inside the Octagon. 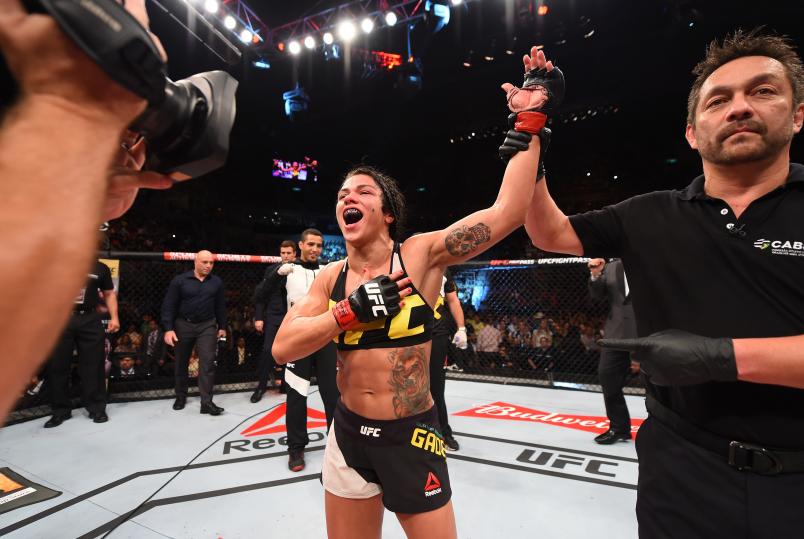 RIO DE JANEIRO, BRAZIL - AUGUST 01: Claudia Gadelha of Brazil celebrates her victory over Jessica Aguilar of the United States in their women's strawweight bout during the UFC 190 event inside HSBC Arena on August 1, 2015 in Rio de Janeiro, Brazil. (Photo

Take note of this fight, trivia fans, as it was the first bout in the history of the UFC women’s strawweight division.

Gadelha entered with an 11-0 record and widely regarded as one of the top competitors in the 115-pound weight class, while Lahdemaki was a 26-year-old with a perfect 5-0 record and coming off a first-round submission win over Karla Benitez, who was 10-4 at the time and would go on to face a host of familiar names during the course of her career.

The Brazilian won the bout by unanimous decision, sweeping the scorecards and getting a 30-26 from one official to push her winning streak to an even dozen and establish herself as one of the top contenders for whomever claimed the title on TUF. It was a quality first showing for the talented Gadelha and a strong introduction to what has become a tremendously entertaining and competitive division.

UFC on FOX 13 vs. Joanna Jędrzejczyk

Nearly six years later, this is still one of those fights that can instantly cause an argument to break out in certain circles.

After winning their respective debuts 10 days apart, Gadelha and Jedrzejczyk met in the Arizona desert to determine the No. 1 contender in the strawweight division. The night before, the top-seeded Esparza completed her dominant run through the TUF 20 tournament with a third-round submission win over Rose Namajunas to become the inaugural UFC women’s strawweight champion, and now Gadelha and Jedrzejczyk would duke it out to determine who would get the first crack at the newly minted titleholder.

You’re not going to find many fights closer than this one.

In a three-round affair where a slight advantage in one five-minute frame can shift the scorecards one way or the other, Gadelha and Jedrzejczyk delivered as even a bout as you can find. The Polish standout claimed the first on all three cards after successfully defending a number of takedowns and putting Gadelha on the canvas briefly, but over the final 10 minutes, the Brazilian would successfully implement her wrestling and repeatedly bring the fight to the ground. While Jedrzejczyk continued to get the better of things in the stand-up department, “Claudinha” was frequently forcing her to defend and scramble back to her feet.

All three judges saw the third for Gadelha, leaving the middle stanza as the swing round that would determine the outcome. Two awarded the frame to Jedrzejczyk, thus giving her the victory and the opportunity to face Esparza for the strawweight title at UFC 185, while the razor-thin decision — and an inadvertent late blow from Gadelha following the final bell — sparked a rivalry between the two elite competitors. 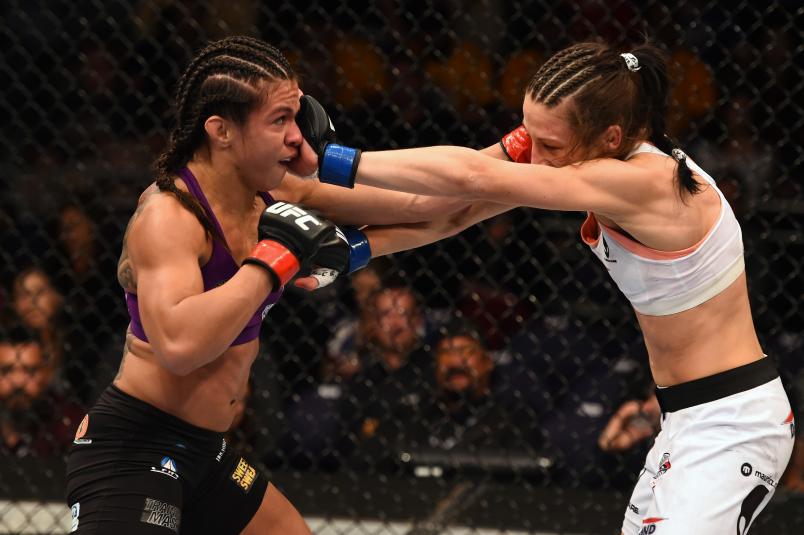 PHOENIX, AZ - DECEMBER 13: (L-R) Claudia Gadelha of Brazil and Joanna Jedrzejczyk of Poland exchange punches in their women's strawweight fight during the UFC Fight Night event at the U.S. Airways Center on December 13, 2014 in Phoenix, Arizona. (Photo by

Because things didn’t work out very well for her inside the Octagon, a lot of people tend to forget or diminish just how good Jessica Aguilar was when she finally arrived in the UFC.

Over a five-year period from November 2009 to November 2014, “JAG” went 14-1 with victories over Esparza, Lisa Ellis, Emi Fujino, Kalindra Faria and a pair of wins over the legendary Megumi Fujii, while her lone setback was a questionable split decision loss to Zoila Frausto. She was undeniably one of the top strawweights at the time, and when the UFC announced it was introducing the 115-pound weight class, it was disappointing that Aguilar would not immediately be included as she had recently signed a multi-fight deal with World Series of Fighting.

She eventually found her way to the Octagon and made her debut against Gadelha in the main card opener of the August 2015 pay-per-view event headlined by Ronda Rousey’s title defense against Bethe Correia. Aguilar arrived on a 10-fight winning streak and Gadelha dominated the action from start to finish.

Looking at her resume now, knowing Aguilar ultimately went 1-4 in the Octagon, people tend to skip over this performance as some kind of “guaranteed victory” or easily dismissible triumph, but for Gadelha to go out and just steamroll her the way she did was a reminder that she was an elite talent. On top of that, it would set up one of the most anticipated rematches in the history of the UFC women’s ranks.

Three months after beating Gadelha in their first meeting, Jedrzejczyk mauled Esparza to claim the strawweight title and begin her reign atop the division, following it up with an absolute mugging of Jessica Penne in Germany and a decisive decision win over Valerie Letourneau at UFC 193 in Melbourne, Australia. With Gadelha back in line to challenge for the title and the tensions between the two running high, the UFC opted to have the rivals serve as opposing coaches on Season 23 of The Ultimate Fighter.

While it’s not necessarily valid to say Gadelha was a better coach, her team certainly dominated the action in Las Vegas, as six of the eight semifinalists across the two competitions hailed from Team Gadelha, including three of the four finalists and both winners, Tatiana Suarez and Andrew Sanchez.

The adversaries squared off in the main event of the second of three consecutive events held during International Fight Week in 2016, following Eddie Alvarez’ lightweight title victory over Rafael Dos Anjos and setting the table for UFC 200 the following evening. Unlike their ultra-close first encounter that was tight all the way through, their second meeting played out as a tale of two halves.

Gadelha dominated out of the gate, using her grappling and showing continued improvement with her hands. She sprinted out to an early lead, winning both the first and second rounds on all three scorecards, putting Jedrzejczyk in a position where she would have to run the table or score a finish in order to retain her title. Even in the opening moments of the third, Gadelha continued to control the action, dragging Jedrzejczyk to the ground, nullifying her striking advantage by keeping things in close quarters.

But as they separated off the cage at the three-minute mark of the middle frame, Gadelha looked tired and Jedrzejczyk took note and turned up the pressure. The challenger drove through another takedown a minute later, but the champion scrambled to her feet, landed a clean shot from top position and then sauntered back into space, dismissively calling for Gadelha to get back to her feet.

That was the fight right there.

Despite there being a little over a minute left in the third round with Gadelha up 2-0 on the scorecards, the momentum had shifted and Jedrzejczyk would ride that wave to a unanimous decision victory.

Gadelha rebounded from her second loss to Jedrzejczyk with a unanimous decision victory over Cortney Casey later that year, then continued her push to earn another championship opportunity by squaring off with Kowalkiewicz in the co-main event of UFC 212. This was a clash between the No. 1 and No. 2-ranked contenders in the division and Kowalkiewicz was just over six months removed from her own unsuccessful bid to wrestle the title away from “Joanna Champion.”

With Kowalkiewicz coming off a solid showing in defeat at UFC 205 and Gadelha having looked good, but not great against Casey the following week, many anticipated this would be a hotly contested affair. Gadelha had other ideas.

After two minutes of trading in space where neither woman gained any real advantage, the Brazilian closed the distance, clinched her hands around Kowalkiewicz’ waist and twisted her down to the canvas, landing in side control. As Kowalkiewicz looked to roll to her knees in an attempt to stand, Gadelha climbed on her back, quickly sinking her first hook in before beginning to attack the neck.

Before Kowalkiewicz could start fighting the hands, Gadelha fished her arm under the chin and locked up a rear-naked choke, tightening her squeeze as she sunk in her second hook. A few seconds later, Kowalkiewicz tapped.

In a little more than three minutes, Gadelha had reminded everyone that she was still a force to be reckoned with in the strawweight ranks. 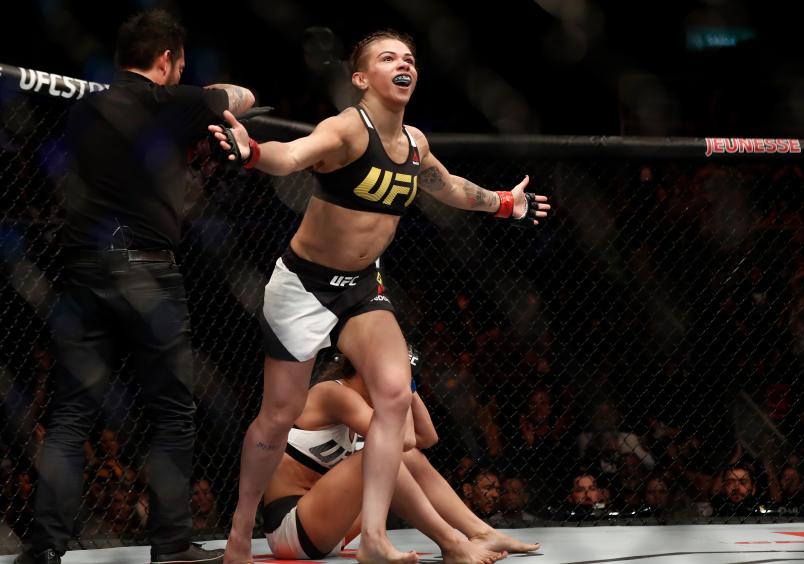 RIO DE JANEIRO, BRAZIL - JUNE 03: Claudia Gadelha of Brazil celebrates after her submission victory over Karolina Kowalkiewicz of Poland in their womens strawweight bout during the UFC 212 event at Jeunesse Arena on June 3, 2017 in Rio de Janeiro, Brazil.

Two years after her victory over Kowalkiewicz, Gadelha walked to the cage on the preliminary card of last summer’s International Fight Week pay-per-view spectacular with a number of questions hovering around her.

After beating Kowalkiewicz, she was beaten by Jessica Andrade in a title eliminator in Saitama, Japan, then eked out a split decision victory in her long-overdue clash with Esparza before looking listless in a unanimous decision loss to Nina Ansaroff at UFC 231 in Toronto at the end of 2018. She’d spent the previous couple of years bouncing around between different gyms after severing her ties with Nova Uniao and this would be her first appearance after connecting with Mark Henry, Ricardo Almeida, and the rest of the talented crew from in and around Toms River, New Jersey.

While not the most thrilling performance of her career, Gadelha showed considerably better conditioning than she had in the past, pushing through 15 hard minutes against the durable Canadian TUF alum, earning 30-27 scores across the board to get back into the win column and show that reports of her decline and departure from title contention had been premature.

She was scheduled for two different compelling matchups since beating Markos, however she was forced to withdraw from her bout with Cynthia Calvillo due to an ankle injury and her bout with Alexa Grasso at UFC 246 was scratched at the 11th hour when the Mexican prospect failed to make weight.

Finally, the sixth-ranked strawweight will be back in action this weekend, taking on the streaking Angela Hill in a bout that will have an immediate impact on the title picture in the 115-pound weight class.