Claudia Gadelha's UFC Journey Has Had Ups and Downs, But The Veteran Contender Knows She Is Far From Finished.
By E. Spencer Kyte, on Twitter @SpencerKyte • Nov. 4, 2020

Claudia Gadelha has been a fixture in the Top 5 of the women’s strawweight division since its inception, yet as she readies to face Yan Xiaonan on Saturday night in Las Vegas, the perennial contender feels like a dismissed member of the championship chase.

“I feel like a lot of things happened in the last years of my career,” began the Brazilian veteran. “I lost some fights that I shouldn’t have lost, I went through a lot of challenges switching camps and moving to America, and I feel like I haven’t performed the way I wanted to and that’s probably why they don’t mention me the way they should.

“But I’m working on getting back to the Claudia that was beating everybody and I feel like I’m there,” she added. “I have the right people around me now, I have the right mentality about the sport, and I’m so experienced — 22 fights and I’ve fought everybody — so I’m good to go. I’m going to perform the way I really want to now.”

The 31-year-old Brazilian arrives in Las Vegas on a tidy two-fight winning streak, having outworked Randa Markos at UFC 239 and edged out Angela Hill in one of the more hotly debated decisions of the year early in May. Those victories coincide with Gadelha shifting her training camp to New Jersey to work with Mark Henry, Ricardo Almeida, and the rest of the crew commonly referred to as “The Iron Army.” 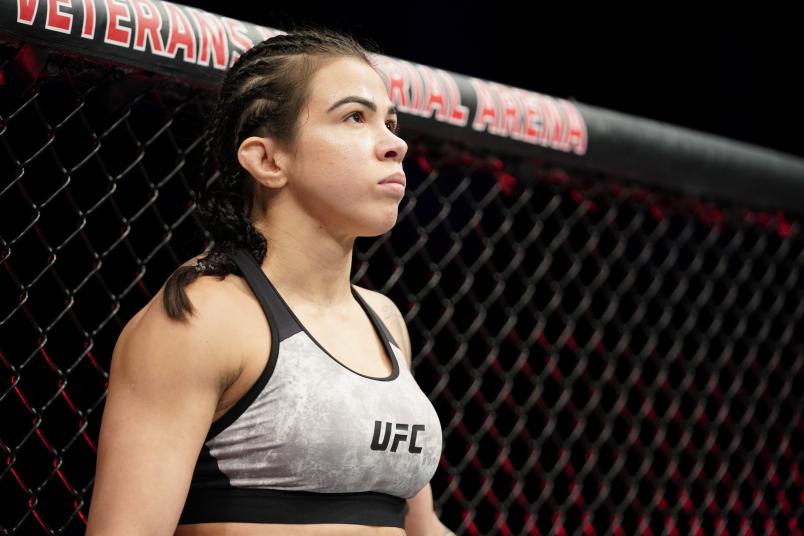 Claudia Gadelha of Brazil prepares to fight Angela Hill in their strawweight fight during the UFC Fight Night event at VyStar Veterans Memorial Arena on May 16, 2020 in Jacksonville, Florida. (Photo by Cooper Neill/Zuffa LLC via Getty Images)

A long-time member of the famed Nova Uniao camp, Gadelha bounced around for a number of years after leaving the Rio de Janeiro outfit, making stops in Albuquerque and Las Vegas before ultimately deciding that working with Henry & Co. was what she needed to do in order to get back into title contention.

Thus far, the results have been there, even if the performances haven’t been as dominant as some observers and critics would like, but for Gadelha, all that matters is that she’s continuing to make progress and adding wins to her resume.

“I feel like the first couple months, I learned a lot and got these new tools in my toolbox and I was like, ‘What am I going to do with this now? It’s so much,’” she said with a laugh. “But then I started understanding the philosophy of how everything works with them.

“It’s been almost two years that we’re working together and I really love everything that we do — I understand them very well and I have a great relationship with them outside of fighting as well. I feel like I understand everything now and things are really starting to happen now.”

This has been a trying year for just about everyone worldwide, and a challenging one professionally for Gadelha as well. 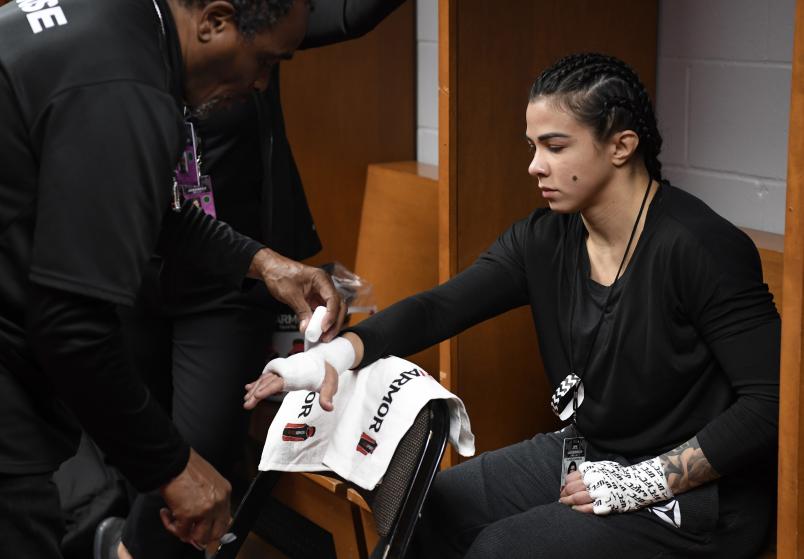 Claudia Gadelha of Brazil has her hands wrapped prior to her fight during the UFC fight night event at VyStar Veterans Memorial Arena on May 16, 2020 in Jacksonville, Florida. (Photo by Mike Roach/Zuffa LLC)

After completing a wintery training camp in Toms River, New Jersey and making weight for her bout with Alexa Grasso at UFC 246 in January, the bout was called off when Grasso hit the scales five pounds over the strawweight limit.

The close, competitive fight was cast as a clear victory for Hill online, with the obvious positives from Gadelha’s performance disappearing into the ether as the conversation fixated on the judges’ scorecards and the popular Hill being victimized by their tallies.

Then, less than a month before she and Yan were initially slated to step into the Octagon at UFC 253, the Brazilian was forced to withdraw due to a knee injury, forcing the bout back to this weekend.

Despite the challenges and frustrations, Gadelha remains positive heading into this weekend’s crucial clash with the streaking Chinese up and comer.

“It’s a crazy year, but it’s not a bad year,” she said. “I’m working, I’m doing whatever I can do to see the people I love, I got to fight this year already, I’m fighting again, my birthday is in a month, so I’m happy.

“I know it’s a challenging year, but I feel like I’m keeping my **** together and getting through this year.” 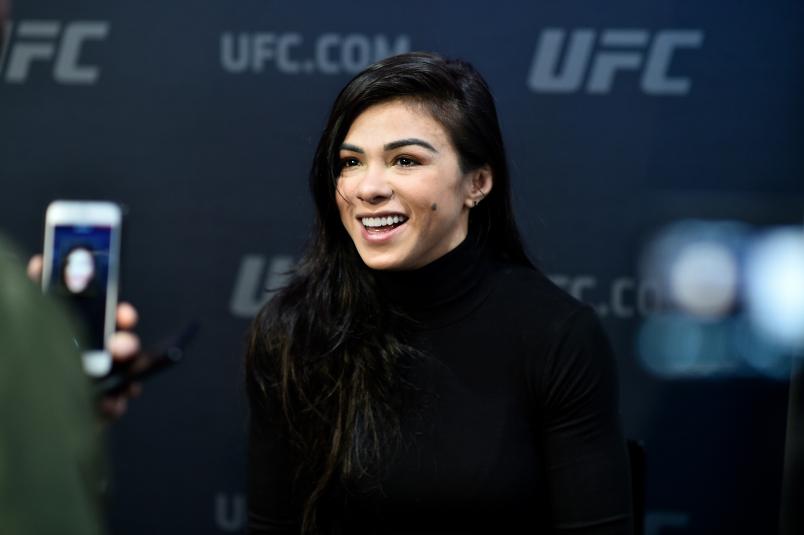 Claudia Gadelha of Brazil interacts with the media during the UFC 246 Ultimate Media Day at UFC APEX on January 16, 2020 in Las Vegas, Nevada. (Photo by Chris Unger/Zuffa LLC via Getty Images)

A great deal of that optimism comes from her continued work with her team in New Jersey, as Saturday will be her third fight since she began training alongside the likes of Frankie Edgar, Eddie Alvarez, and Lance Palmer, with an additional training camp mixed in for the scuttled clash with Grasso at the start of the year.

While many think elite athletes connecting with new, established coaches and teams will produce immediate connections, improvements, and results, the reality is that like any relationship, all of those things take time to build and strengthen and solidify. Although the results have been positive thus far, they’re only a precursor to greater overall improvements and long-term gains Gadelha expects the union to produce.

Preview the event with significant stats

And that’s what makes this weekend’s pairing with Yan so appealing.

The 31-year-old Yan has quietly amassed a 5-0 record inside the Octagon, with her last two victories coming against Hill and former title challenger Karolina Kowalkiewicz. She’s lost just once in her career, all the way back in September 2010, with the lone blemish on her record since being a no contest verdict in a bout with Emi Fujino where an accidental clash of heads rendered the Japanese stalwart unable to continue.

Though Yan is currently stationed four spots behind Gadelha in the rankings, she feels like the fighter carrying all the momentum into the Octagon on Saturday, and that’s just fine with the battle-tested Brazilian. 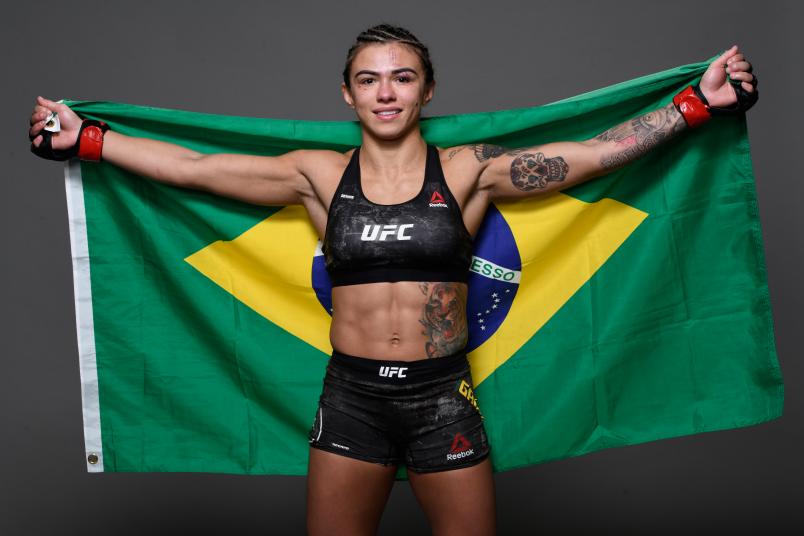 Claudia Gadelha of Brazil poses for a portrait during the UFC 239 event at T-Mobile Arena on July 6, 2019 in Las Vegas, Nevada. (Photo by Mike Roach/Zuffa LLC).jpg

“I fought everybody,” said the Brazilian standout, who earned the first victory in the history of the UFC strawweight division and has faced nothing but top contenders and divisional fixtures since her debut victory in July 2014. “I fought the top contenders. I’ve been there with the best strikers in the game and I’ve seen everything.

“I know Yan is going to come after me very aggressively — that’s her game, that’s what she does — but I feel like I have the tools to beat her.”

After a tumultuous year and with the top of the division a little unsettled, Gadelha would like nothing more than to close out her 2020 campaign with a victory, except for maybe avoiding another frigid, dreary winter in Toms River.

“I’m trying to stay away from the winter in New Jersey,” she said with a laugh. “It’s very hard for me as a Brazilian to spend winters there; it’s very cold.

“I’m going to be going for a little bit to train, but I’m going to run away from the winter.”