Claude Patrick - The B-Side No Longer

"When it comes down to fight time, it’s a fight, and that’s what I bring to the table." - Claude Patrick 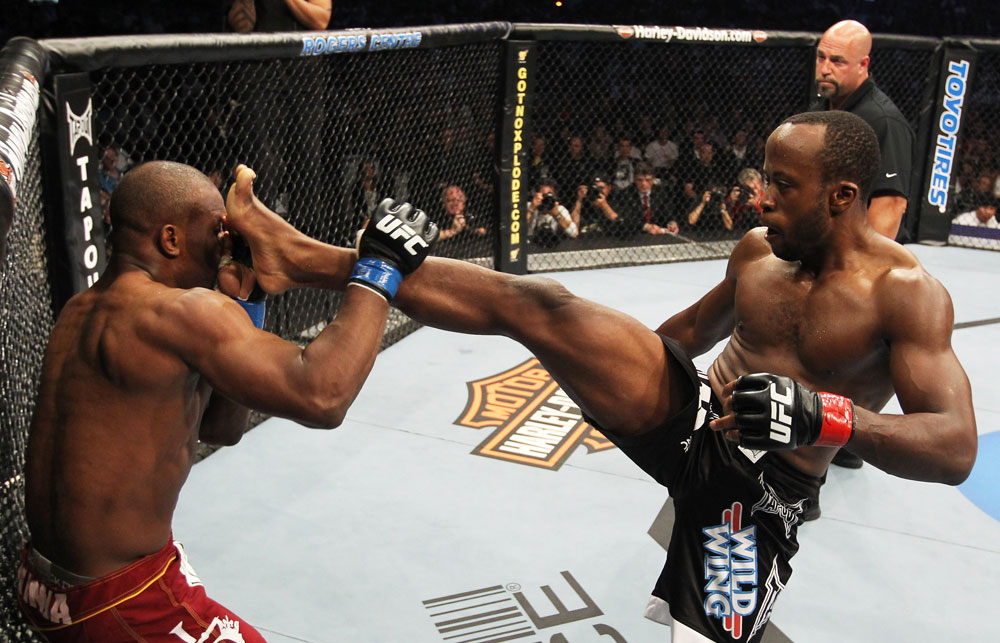 April 30, 2011 was a night like no other for Claude Patrick. For 14 years he had trained for this moment; for nine years he fought in everybody else’s backyard but his own. Now he was in his hometown of Toronto, in front of over 55,000 fans, and it’s probably safe to say that 54,995 were cheering for him when he faced Daniel Roberts at UFC 129.

“Usually if I hear a single cheer, I’m like ‘wow, what’s going on here?’” said Patrick, whose unique form of dues paying was only shared by other Ontario natives like featherweight contender Mark Hominick.  “If they’re not booing or trying to kill you, it’s a real good thing. (Laughs) So it was a trip to be at home and to have people cheering for me. I’m so used to being that darkhorse, out of town guy. You just pull up, fight and go.”

And while many saw Patrick vs. Roberts to be a 50-50 matchup going in, what these people didn’t account for was the fact that being the “B-side” of the fight card for most of your career will make you tougher than most of your peers. Forget all the time spent in the gym; what separates many at the elite level of the game are the intangibles, the things that don’t show up on paper. At 31, Patrick has had a rough MMA upbringing that has given him intangibles for days, and he was ready to show them to Roberts and everyone else in Rogers Centre that night.

“A lot of people don’t know what level I’m at because I haven’t done any of these big name grappling tournaments, and I don’t have seminars and things like that set up, so people think I’m just another guy happy to be there,” said Patrick, a brown belt in Brazilian Jiu-Jitsu. “While I’m super happy to be competing in the UFC, I also put in my dues and trained with a lot of the best guys and just humbly do my thing below the radar. People thought that because he (Roberts) was coming from a certain camp and because of his background that he was gonna be able to dominate me on the ground, and he was training with this Thai guy for standup, but all that doesn’t matter. When it comes down to fight time, it’s a fight, and that’s what I bring to the table.”

Three rounds later, Patrick had delivered perhaps his most impressive Octagon performance to date, earning a unanimous decision victory that lifted his UFC record to 3-0 and his overall pro MMA slate to 14-1. More importantly, it extended his unbeaten streak to 13 fights and six years, and if you didn’t know who Patrick was before, you’d better start paying attention, because he’s finally ready to let the world in now.

“I’m trying to step out of the shadows a little bit and that fight was a good opportunity to show my skills,” said Patrick, who may not have eight million followers on Twitter or a stack of t-shirts bearing his name, but he can fight, he’s an engaging and thoughtful personality, and he’s earned his share of the spotlight. He also doesn’t worry about what his peers are doing because he’s had his own plan of attack.

“I’m not hating on the other guys,” said Patrick. “I would say don’t count my money because I’m not counting yours. Everybody has their different approaches and you can have as many people as you want on Twitter and as many t-shirts as you want, but it all boils down to the fight ultimately, and getting in there to show and prove. That’s what I’ve been really focusing on doing thus far, almost to the detriment of not caring much about the other aspects of things. So now I’m trying to step out a little bit more and get myself a bit more known and a little bit more in the spotlight. This fight should help with that significantly.”

“This” fight is one that wasn’t even supposed to happen before fate stepped in last month. Originally scheduled to battle fellow up and comer Rich Attonito on Saturday’s UFC 140 card in Toronto, Patrick saw a new and even better opportunity arise when countryman Rory MacDonald was forced out of his main card bout against Brian Ebersole due to injury. “The Prince” was offered the move to the Pay-Per-View portion of the event, and while he didn’t see that coming, he did have a feeling that he wouldn’t be throwing hands with Attonito on December 10th.

“I’m not like a psychic or anything like that, but I knew I wasn’t gonna be fighting Rich Attonito,” said Patrick. “For whatever reason, I just always thought that we wouldn’t be fighting. I didn’t know that Rory would get hurt and that it would be Ebersole I’d be fighting, but it is what it is. I had a gut feeling that something was gonna happen with that fight.”

That gut feeling was right on target, and while the storybook tale of the local kid coming in on short notice for the big Pay-Per-View fight in his hometown is perfect for us writing it, for Patrick, it’s not really how he sees the fight. For him, he has to look at it as just another night at the office. It’s how he kept his cool in April in a situation where most would lose it.

“I really zoned a lot of those things out pre-fight because you can’t be looking at the crowd or how many people are there and what they’re saying or doing,” he said. “I really focus on the task at hand, which is the opponent in front of me.”

Everyone says that though. How was Patrick able to pull it off in the biggest fight of his career?

“The most important thing is making sure you’re prepared, and not just in that physical element, but covering all the bases beforehand,” he explains. “When you go to fight, anything could happen. I’ve seen it many times that not always the best fighter wins the fight, and I’ve seen a lot of guys get bogged down with those questions. So I just bring everything I have to the table, and I believe in my skills and I have every reason to. I’ve been training hard and smart with the right people, improving my training camp and always trying to learn, so as long as I do everything on the back end that I should be doing, which I like to think I do, then I’m very confident going into the fight. I just have to execute.”

This time around, Patrick has bolstered his camp like never before, something most fighters do after a loss, not after an impressive victory. Then again, he’s always followed his own path, so while he has supplemented his training in the past with trips to Florida, this time he had an extended stay while working with some of the sport’s best.

“I hooked up with the guys at Team Jaco and the Blackzilians, among other places too,” said Patrick. “I’m training at Pablo Popovitch’s to upgrade my jiu-jitsu as well. I have a lot of friends in the South Florida area and I’ve done a camp out here in the area twice before, so I’m no stranger to the area, but I haven’t lived here for such an extended period of time, and I haven’t had a set camp with this many quality guys. I’ve worked with Rashad Evans, Tyrone Spong, JZ (Cavalcante), the Villefort brothers, Jorge Santiago, and a bunch of up and coming guys; Melvin Guillard just got here as well. So it’s a Who’s Who of talented guys and just to be in the room and be able to hang and pick these guys’ brains in different perspectives, it’s very useful and it adds to my confidence going into the cage.”

Saturday, Patrick will meet one of the few fighters who can relate to his less than glamorous ascent up the ranks in Ebersole. A breakout star in 2011, Ebersole, who is five months younger than Patrick, has put together 64 documented pro fights, and he did so in some less than glamorous settings over the years.

“I definitely respect that,” said Patrick. “He’s what I call one of those real old-school type guys and I’d be along the same lines as that if I had the opportunity. But given where I lived in Canada, there wasn’t that opportunity – especially in the province I was in. I was in the first UFC in Ontario, and before that it wasn’t something legal that we could do and partake in. So to be able to get to compete was something you had to leave the province for, and there wasn’t big money, so I couldn’t get all those fights in. But I was steadily training during that whole time.”

Now it’s time to pick up some returns on that investment. For Claude Patrick, that means more fights, more wins, and getting a step closer to a world title. So you haven’t heard the last of him, because this ride is just beginning.