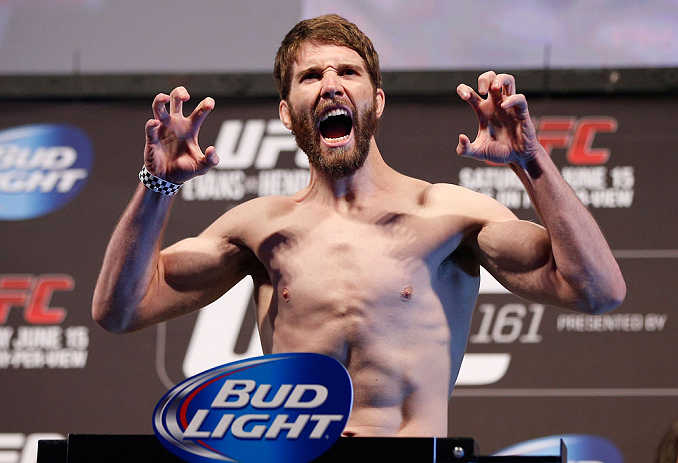 Ask anyone that knows him and you’ll hear the same thing: Mitch Clarke is one of the nicest guys you could ever have the pleasure of meeting. Smart and funny, polite and caring, the 28-year-old Canadian is, as head coach at the MMA Lab John Crouch frequently describes him, “such a nice dude.”

It’s not often that you’ll hear someone’s niceness being mentioned as a stumbling block to professional success, but as a competitor in the treacherous UFC lightweight division, Crouch is working with the 10-2 fighter to eschew some of those “good guy” instincts when he steps into the cage.

“You’re not going to meet anybody nicer than Mitch Clarke,” suggests Crouch, who started working with the Saskatoon native prior to his UFC 149 encounter with Anton Kuivanen. “I think it’s hard for him when he’s back home and comfortable to be the bully in the cage and beat the tar out of somebody. We kind of encourage that around here - that’s how you win fights - and he’s really embraced it.

“Skill-wise, Mitch is pretty good - it’s not necessarily about his skill level; it’s more about him asserting himself in the cage, believing that he’s going to do his thing. I think he’s gotten a lot better in the last year with that.

Clarke will get the chance to show those improvements next weekend when he takes on former Ultimate Fighter finalist Al Iaquinta as part of the preliminary card at UFC 173, the annual Memorial Day weekend event in Las Vegas.

The Serra-Longo Fight Team member has rattled off three straight decision wins since his loss to Michael Chiesa in the finale of the only live season in the history of the long-running reality TV competition just under two years ago and has been tabbed by many as a fighter to watch in the ultra-competitive 155-pound ranks.

“All the guys he’s fought, they’ve been tough, but I think they’re bringing him up,” says Clarke of his upcoming opponent. “When he started, I think he was 5-1 or 6-1 and he was in the UFC because of being on TUF. I think they were trying to find guys that matched up competitively - guys that would be an equal fight.

“The matchmakers at the UFC know what they’re doing and they were all good fights, tough fights, and I think it’s an interesting fight between him and me, and I definitely plan on playing spoiler.”

“It’s definitely a tough test - Al’s a great guy, great fighter and comes from an excellent camp too,” adds Crouch. “I really like Ray Longo and Matt Serra. It’s definitely a step up for Mitch. This is going to test him and make him be his best, so I’m excited about it.”

While his UFC record stands at 1-2, closer inspection shows Clarke is on the upswing, having performed better in each successive fight. After losing his debut to John Cholish at UFC 140 inside the distance, he dropped a split decision to Kuivanen in his sophomore outing before dominating British lightweight John Maguire to earn his first UFC win last June.

Overcome by emotion as his name was announced and his arm was raised in victory, Clarke collapsed to his knees with tears streaming down his face.

“That win meant everything,” he explains. “Number one it meant job security. Everyone told me I couldn’t. A lot of people said I wouldn’t get to the UFC. Well I did. Then they said I wouldn’t be able to win in the UFC, and that was vindication right there.

“I was not the betting favorite in that fight and everybody was talking about what John Maguire was going to do next, and it motivated me to be better. It helped me turn my life around. All the trials and tribulations beforehand made it that much sweeter.

“I couldn’t control myself, unfortunately, and that’s how it all came out,” he adds. “It was a great moment for me and I’m looking forward to having some more wins, maybe with less crying afterward.”

Most of the time in the preamble to a fight, coaches and fighters will talk about the specific areas where they feel they have an advantage over their opponent - dissecting film to find weaknesses they can exploit, crafting a game plan they believe will lead them to victory.

Though Clarke and Crouch will definitely discuss Iaquinta’s strengths and weaknesses before the fighters hit the cage, the highly respected coach who famously tabbed Benson Henderson for greatness long before “Smooth” ascended to the top of the UFC lightweight division believes there is something far more important than a sound game plan that will determine who emerges victorious on May 24th at the MGM Grand Garden Arena in Las Vegas.

“Did you see the Matt Brown fight last night?” he asks the day after “The Immortal” notched his seventh consecutive win in dominant fashion against Erick Silva. “That guy? That’s all will power. That’s him deciding that he’s going to win. That isn’t game plan. He decided he was going to win that fight and he’s done that for his last however many.

“His will power - his deciding `F@$# this, I’m going!’ - that’s what makes him so good. I think he’s really skilled, but it’s not his skill that shines through; it’s his `I’m going to win this no matter what it takes’ mindset.”

And that’s what Crouch has been trying to instill in Clarke every day he walks through the doors of the Glendale, Arizona gym that is quickly becoming one of the best fight camps in the entire sport.

“We have a 1-0 pro right now who is a f@#$ing animal,” Crouch says in regard to frequent Clarke training partner Drakkar Klose. “Nobody knows him, but he’s a monster and Mitch has to go with him all the time. He’s a ‘55er, college wrestler and he’s mean as hell, so Mitch gets out of his comfort zone and has to go with that guy, not to mention Ben Henderson and Jon Tuck and Efrain Escudero and Joe Riggs - the whole Murderers Row.

“I have a line of ‘55ers that will steal your lunch money, so for Mitch, every day at practice is hard. Having to steel yourself for battle every day has helped him grow a lot and I think you need to have it in this sport.

“You have to insist that it’s going your way. `I understand, but I’m going to win. I don’t care what happens. You can get mad, you can get fired up, you can hit me, punch me, grab me. Whatever you do, I’m still going to win.’ That’s the thing. However you do it, you have to be at that place that no matter what happens, you’re going to find a way to win that fight.”

And that’s exactly what Clarke intends to do at UFC 173.

“He’s a really tough guy - a good wrestle-boxer, he’s got some sneaky jiu-jitsu things. I think he’s good at moving forward and he does a lot of things really well,” he says of Iaquinta. “His biggest thing is that he’s tough and he’s got that hard-nosed style - he’s going to move forward and try to beat you up.

“I think I have a similar style, do the same thing. I’m a big lightweight, so I’m definitely going to use all my length, all my size, my little sneaky tricks and I definitely plan on putting him through the grinder.