Clark cool with being the 'bad guy' in Poland 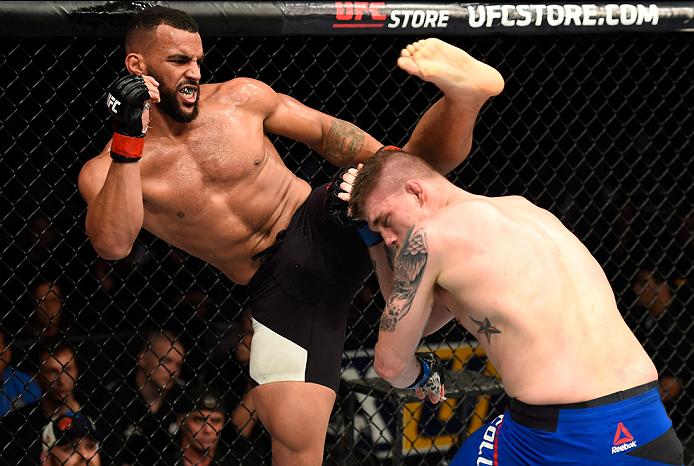 If light heavyweight prospect Devin Clark was a betting man, he might want to bet the house that he’s going to hear some boos when he faces Polish veteran Jan Blachowicz this Saturday in Gdansk. But he’s cool with that.

“Be the bad guy?” he asks. “Oh yeah, definitely. I’m ready for the boos and everything. I live for that situation. Being the underdog, getting the boos, proving people wrong, it doesn’t really affect me. In wrestling I had to deal with a lot of adversity, so I’m used to it by now and I learned to love it.”

Wrestling is the base that has built so many UFC fighters over the years, but it’s not just the techniques of the sport that allow those mat practitioners to have successful careers in the Octagon. Instead, it’s the lessons of the grind that make wrestlers succeed, and that’s not just in the room or on the mat, but outside of it as well.

In the case of Clark, a biracial kid growing up in South Dakota, there were the occasional ugly obstacles that had to be navigated, particularly when he defeated an opponent from a rival town three times, drawing the ire of some fans from that opponent’s town.

“His hometown, they hated me,” said Clark. “I beat him every time and it got kind of ugly. It was to the point where hundreds of fans from that town were against me just because I was good. It got kind of racial too. The N-word was thrown around, but by the time we met in State, I had his number.”

It was early lesson that people can get ugly, but also that success is the best revenge. I asked Clark who was there for him to get him through such rough times.

“The same guy that’s in my corner now, my dad,” he said. “My dad’s there, he’s always been there for me and he taught me the right way to deal with things like that. I love the state where I’m from, but it’s mostly white there and I grew up being a mixed kid. And a lot of these tournaments growing up, from when I was seven years old all the way through high school, I was one of the only black kids in the whole tournament, so that’s something I had to deal with from a young age and I just got used to it. So that adversity doesn’t bother me anymore. We won those matches and won those fights.”

And South Dakota, particularly Clark’s home city of Sioux Falls, has embraced the rising UFC star. But even getting some home games over the course of his fight career isn’t always a good thing, as evidenced by the loss he suffered in his Octagon debut against Alex Nicholson in July 2016.

“The last time I fought back home in South Dakota was my UFC debut, and it was my fourth time in a row fighting at home, and I just got too comfortable,” Clark said. “I didn’t have that adversity and that feeling of being a little bit uncomfortable. But when I go on the road, I love it, you have no choice but to win. You show up and do your thing while everyone’s pulling for the other guy.”

In Clark’s next two bouts, he defeated Josh Stansbury, who was training in Las Vegas, in Vegas, and he then beat Missouri’s Jake Collier in Kansas City. Next up is Poland and Blachowicz, and Clark can’t wait.

“They (the fans) will respect me by the end of the fight,” he said. “I always end up earning my respect. It just comes down to fighting and putting on a good show for the people in Poland. They’re fans, and of course they’re going to go for their home guy, and I love the enthusiasm of it all. Whether it’s negative towards me or not, it’s still energy coming out.”

And with a win, Clark could get closer to that move from prospect to contender, and that’s what has him really motivated heading into his weekend abroad.

“I’m never settled, but the warm up is definitely over,” he said. “Those other fights were warm up fights, just getting adjusted, and the real opportunity is right now. This is where I start climbing the ladder. This is where I break the top 15 and keep on going. I’m still learning and still young in the sport, but each fight, I’ve progressed, and I’m going to keep doing that and keep getting these bigger fights. I live for the bigger fights.”