With The UFC's Interim Heavyweight Title On The Line At UFC 265, Ciryl Gane Isn't Feeling Any Pressure Ahead Of The Biggest Fight Of His Life.
By Gavin Porter, On Twitter @PorterUFCNews • Aug. 5, 2021

UFC heavyweight Ciryl Gane is just days away from challenging Derrick Lewis for the interim heavyweight title at UFC 265, but it might not seem like it.

Gane’s calm, almost giddy demeanor during fight week isn’t a front. It’s just who Gane is, even days away from the biggest fight of his life. Being relaxed, confident and enjoying everything the UFC has thrown at him has helped him thrive under pressure since making his UFC debut just under two years ago.

At 9-0, the French heavyweight has moved quickly up the heavyweight ladder and with good reason. Gane’s unique skill set and athletic ability helped him cruise to wins over the likes of Junior Dos Santos, Jairzinho Rozenstruik and Alexander Volkov.

And while some people might think that with just six UFC fights on his resume it may be too early for Gane to compete for a belt, the 31-year-old believes he’s right on schedule. 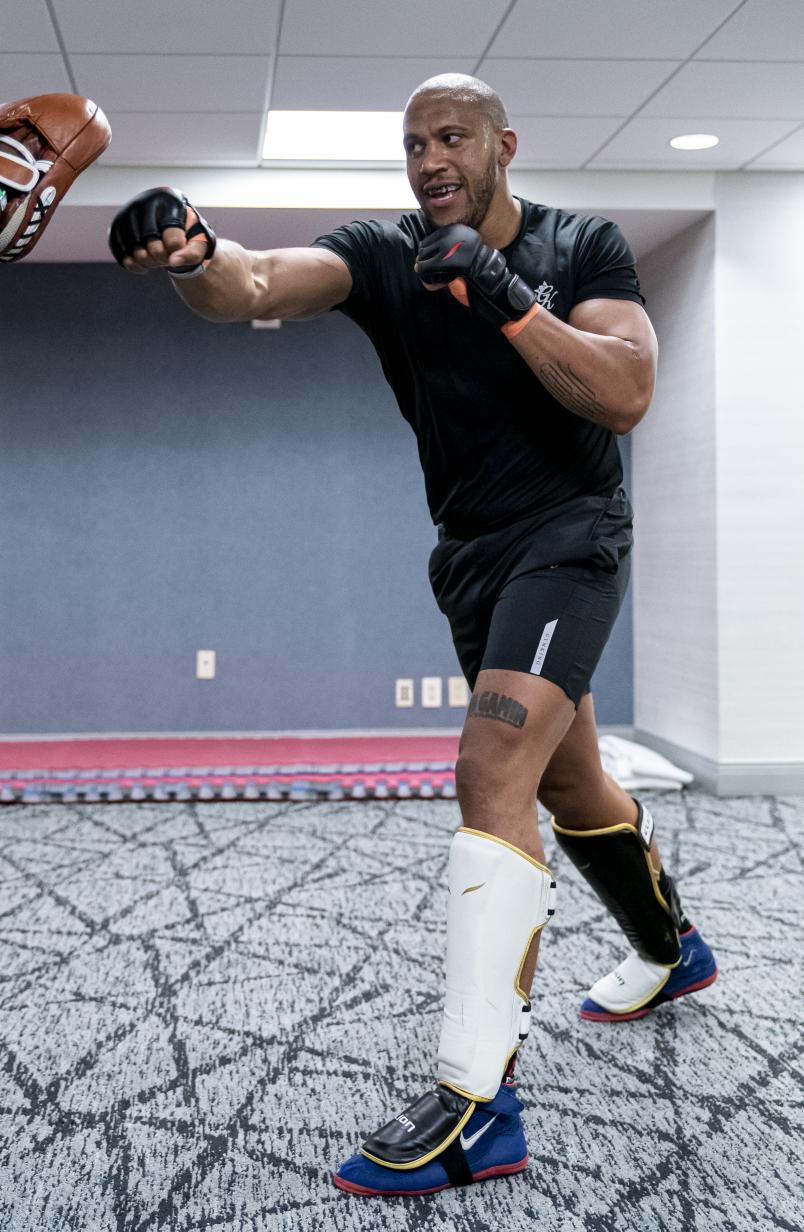 “Yes, I’m young [in my career] but I’ve done really well so why do people say that?” Gane told UFC.com. “I’m ready and I’ll prove it.”

Getting the nod to fight Lewis for the interim heavyweight title was initially a bit of a shock for Gane. Not because he didn’t think he deserved a chance at the title, but because the bout agreement didn’t feature the name of champion Francis Ngannou.

“When the UFC called my coach for this news, I was a little bit surprised, but I was really happy and yes, we say yes because it was not a choice,” Gane said. “For me it’s just a big ticket to be a contender for a unification for the real belt. For me, the real champion is still Francis and if I want to be a champion one day I have to fight and to win against Francis.”

To earn that shot at Ngannou, Gane will need to defeat Lewis in his hometown of Houston, Texas on Saturday. Gane has mentally prepared himself to be the “bad guy” inside the Toyota Center come fight time, but he isn’t concerned with the negative energy that will likely be directed his way.

When it comes to the fight itself, Gane is aware of what Lewis brings to the table.

“Derrick Lewis is a dangerous fighter and he’s not really well-rounded, but he has some skills in his pocket, and he knows when and how to use it. That’s why he’s dangerous, he’s really smart,” Gane said. “I think he’s exceptional because every time he’s looked done or hurt, he’s still here and he’s back and he knocks out the guy. This makes him special.”

Respecting Lewis’ power and his ability to keep himself in fights is something that Gane isn’t taking lightly. He knows he’s going to need to put forth his best effort to best “The Black Beast” on his home turf and bring the interim belt back to France.

Bringing the belt home to his family is Gane’s main motivation, as he and his wife are expecting their second daughter soon.

“It was a little bit difficult [to take the fight with Lewis] because as everyone knows now, I’m waiting for my second daughter and she’s going to come. Hopefully she’s going to wait for me. I did a lot of sacrifice for that, but we said yes,” Gane said. “I started the MMA and the martial arts with Muay Thai six or seven years ago to make money with this. That’s why I started, because my target is to take care of my family. Fighting for the belt means a bigger bonus.”

That extra motivation helped push Gane in his preparation for Lewis and will surely be on his mind on fight night. But even though he has more pressure on him than ever, “Bon Gamin” is confident that his skills and UFC experience are going to help him shine brighter than ever.

“I think it was meant to be and I think at UFC 265 I’m going to do very well,” Gane said. “This fight looks a little like the fight against Jairzinho [Rozenstruik] and I want to do basically the same thing. I think I’m going to manage this fight and I’m going to win.”

Don’t miss Gane and Lewis fight for the interim heavyweight title at UFC 265: Lewis vs Gane, which will air exclusively on PPV at 10pm ET / 7pm PT.