Ciryl Gane: “A Happy Fighter Is A Dangerous Fighter”

After Earning A Third-Round Knockout In Front Of The French Crowd In September, Ciryl Gane Is Ready For The Next Test In His Career
By Maddyn Johnstone-Thomas, on Twitter @MaddynThomas • Jan. 15, 2023

More often than not, you can hear Ciryl Gane before you see him. His laugh is contagious and something I remember from the first time I talked with him ahead of his fight with Alexander Volkov in June of 2021.

At that time, Gane was undefeated and on his way to fighting Derrick Lewis for the interim heavyweight title. It only took three years for Gane to get his shot at gold after making his professional debut in 2018. The only loss of his career came against heavyweight champion Francis Ngannou for the undisputed title.

It’s been almost a year to the day since UFC 270 and Gane has had time to reflect on that loss and knows one day he will be champion.

READ: UFC 285 Headlined By Jon Jones vs Ciryl Gane For The Heavyweight Title

“Before Francis (Ngannou), I was just a young guy, fighting just to be happy,” Gane said. “I am still like that, which I think is really important. A happy fighter is a dangerous fighter, so to stay like that with this mindset is really important. I am more mature, and now I know I want to go to the belt.”

“Bon Gamin” rebounded from his loss against Ngannou in a historic event in Paris. It was the first time the UFC made its way to France and Gane was the headliner. He earned a third-round knockout over Tai Tuivasa in front of his home crowd, making it a moment he will never forget. 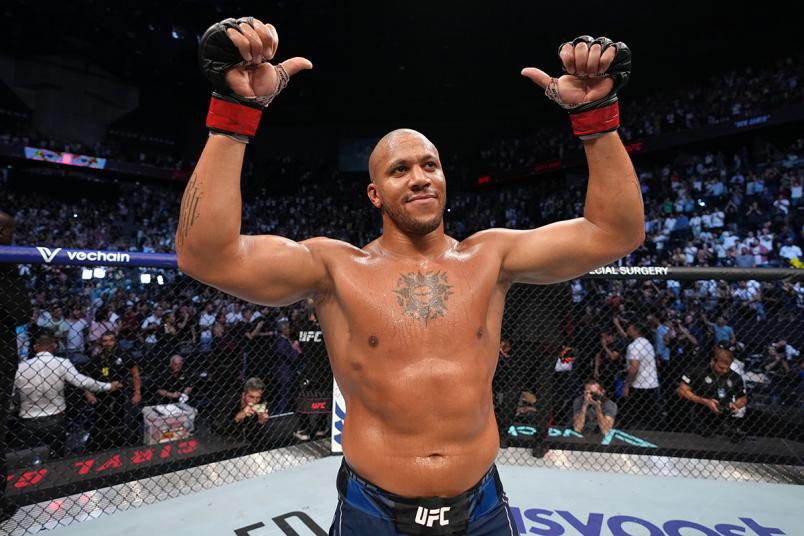 Ciryl Gane of France celebrates his KO victory over Tai Tuivasa of Australia in a heavyweight fight during the UFC Fight Night event at The Accor Arena on September 03, 2022 in Paris, France. (Photo by Jeff Bottari/Zuffa LLC)

“It was really crazy, and it was really important,” Gane said. “After Francis, after I lost, it was very important to get a win and we did, so that’s why I am really happy. It was a plus to be in front of my crowd, my fans, my family, my friends. It made it really special.”

Since Ngannou and Gane faced off in Anaheim last January, the heavyweight title hasn’t seen any other action with Ngannou on the sidelines due to a knee injury. Gane still holds his spot ranked No. 1 in the division, followed by Stipe Miocic, Sergei Pavlovich, Curtis Blaydes and Tai Tuivasa.

At 32 years old, the France native is proud to be among the division’s best. He believes that he is a veteran in the sport now, and even though he is young, Gane is proud of what he has accomplished so far in his career.

“I’ve done a lot already and the first loss against Francis, I gained a lot of experience,” Gane said. “You know my background is in Muay Thai and then I switched to MMA and in all of that time, I never had a loss. This has given me a lot of experience, more maturity when I am going to the gym and when I talk about the future of my career with my coach.”

He has been able to offer his knowledge and experience to training partner Nassourdine Imavov, who headlined his first main event this weekend at UFC Fight Night: Strickland vs Imavov. The two train together at MMA Factory in Paris and Gane has been in Imavov’s corner for his last couple fights.

“Nassourdine is the guy I spend the most time sparring with, more than any other sparring partners I have,” Gane told UFC.com ahead of Saturday’s bout.” I know him and I know it’s possible for him to do beautiful things. This makes me happy to be here with him because of that and because I have that maturity and he knows I have a little bit more experience in the UFC.”

When I talked to Gane on Wednesday of fight week, I asked him when he wanted to get back into the Octagon and if there was anyone, he was looking for to fight, not knowing the announcement that would follow just a few days later.

Where you at @JonnyBones?

“After September, everyone knows I had surgery just after the fight for my hand, so I had to rest for two months, but now I go back to the gym, and I want to get back in shape. I think around maybe March, I am ready. I am ready for everything.”

Just shortly after Imavov’s fight concluded, UFC president Dana White announced that Gane will face Jon Jones for the undisputed heavyweight title at UFC 285 on March 4. Gane’s goal has always been the gold, and he’ll get another crack at it against Jones, the former UFC light heavyweight champion.