Cirkunov knows it only takes one punch to stop Teixeira 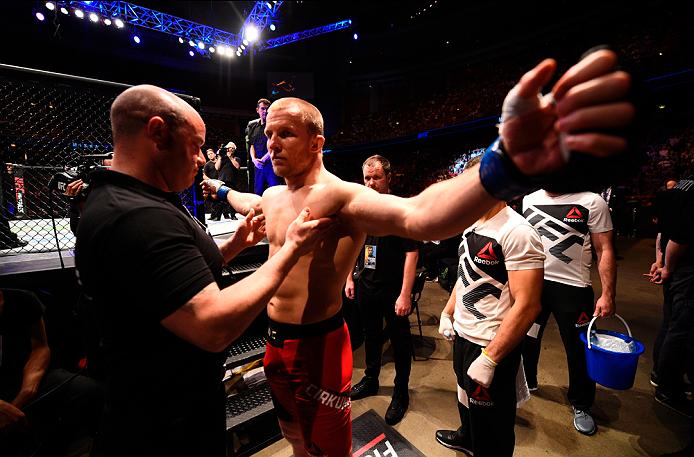 Misha Cirkunov prepares to enter the Octagon before his fight with Volkan Oezdemir at UFC 214" align="center" />
Misha Cirkunov has always been pretty even keeled about things when it comes to his career inside the Octagon.

Hyped as a future superstar when he first transitioned to mixed martial arts from the grappling world, his advanced billing never went to his head and he never took the early setbacks he suffered to heart either. He was always just focused on learning and improving, garnering as much experience as possible so that when the time came for him to compete against the best athletes in the world, he was as prepared as possible.

That steady attitude and “roll with the punches” mindset has come in handy over the last several months as, for the first time in over five years, Cirkunov will step into the cage coming off a loss.

Fighting is one of those things where it doesn’t matter who you are, all it takes is one punch

After rattling off eight straight wins, including four consecutive finishes to begin his UFC career, Cirkunov became the second of three men to fall to Volkan Oezdemir in the Octagon, losing to the Swiss newcomer in May before “No Time” replicated the performance against Jimi Manuwa to emerge as the top contender in the light heavyweight division.

Losses don’t often age well, but with Oezdemer solidifying his position as an elite competitor by icing Manuwa just a few weeks after dispatching Cirkunov in Sweden, the Latvian-Canadian’s stock rebounded and he was rewarded with bout with Teixeira, the type of high-profile pairing he’s been seeking for more than a year.

Like Cirkunov, Teixeira’s last appearance came in Sweden and ended in defeat as he landed on the business end of an Alexander Gustafsson beat down in May.

Initially scheduled to take place in October, the bout was shuffled from Brazil to Canada when the Brazilian’s recovery following hand surgery took longer than anticipated, but the delay has done nothing to dampen Cirkunov’s excitement about the matchup.

“I’ve been working a lot, training very hard – adding certain things, changing a couple things – and I’ve been in Thailand for a couple months training there a little bit. I was supposed to fight originally October 28 in Brazil, so I was trying to get used to the environment there, but then they changed it to December 16, so for the last month, month and a half, I finished my training camp in Canada.

“I was happy that they gave me somebody that I think I deserve because I already fought in the UFC a bunch of times, had good performances and I’ve been asking for a big fight – somebody everyone knows,” said Cirkunov. “A bunch of times, I fought tough guys, some of them were undefeated, but they were all newcomers. All I wanted to do was fight against somebody who was a veteran to go deeper in the mix and I’m happy that I finally got that.

“Don’t get me wrong, it’s a tough matchup,” he quickly added. “I never ask for somebody where I think I’m a lot better; I never look to bully somebody. I’m just there for real tough fights because really, if you’re fighting a tough guy, you might as well fight the tough guy that everyone knows about. That’s where I was coming from and finally I got it.”

For Cirkunov, the opportunity to share the cage with the 32-fight veteran and former title challenger is another piece that helped put his loss to Oezdemir in perspective and lessen some of the disappointment that invariably comes with any loss.

Two years into his UFC journey, he enters Saturday’s contest at No. 7 in the light heavyweight rankings, squaring off with the No. 3-ranked fighter in the division while the lone man to get the best of him in the Octagon prepares to fight for the title in January.

All things considered, things have gone pretty well and with a victory on Saturday night in Winnipeg, Cirkunov will finish the year right where he wanted to be.

“Sometimes we don’t do that enough – stop and look back at everything you did accomplish because as soon as you accomplish it, you kind of forget about it and just want to think ‘what’s next?’” he said. “You want to see the future. At the end of the day, it’s a rough sport, but I do have to get back on that horse and that’s exactly what I’m expecting to do on December 16.

“If you beat somebody like Glover who is ranked that high, it kind of puts everything back in its place and I wouldn’t be that far off of getting the rematch (with Oezdemir) or being thrown in that top mix. That’s exactly where I wanted to be ever since I joined UFC and I’ve only been in UFC for a couple years and I’m already pretty much there.

“It’s a tough sport, but sometimes losing is part of the game,” he added. “It’s all about how you come back and I’m planning on coming back in impressive fashion.”