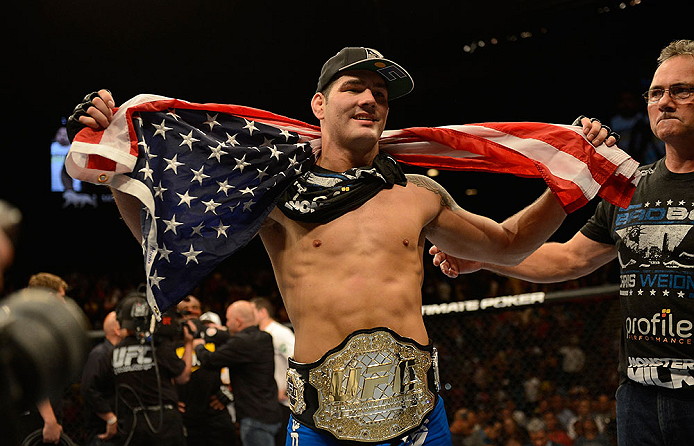 Heading into his matchup with Anderson Silva, Chris Weidman said he was going to emerge as the new middleweight champion.

“I love the fact that people think he’s that good, and I have this opportunity to show them how good I am. I want to be that mystical creature,” he said in this space prior to UFC 162 six months ago.

“I know what I can do, and I know what I’m capable of based on the things I do in training and how hard I work every day. The fact that other people are so into this mystical creature that is Anderson Silva, that makes me even more excited to go out there and kind of disprove that, and shock the world.”

It wasn’t the usual pre-fight proclamation – the one uttered by every fighter preparing to step into the cage; the one that rings hollow half of the time. The unbeaten fighter from Baldwin, New York spoke in measured tones and tempo, the words uttered no differently than if he were giving you directions back to the highway.

He wasn’t Chael Sonnen playing a carnival barker – selling the fight at the highest volume possible, with catchphrases and bravado, promising a victory when defeat seemed imminent. He wasn’t willing the words through chattering teeth and a forced assuredness either, like countless others who made the same declaration before him.

When he talked about his impending showdown with the long-reigning middleweight champion, Weidman spoke with respect for his iconic opponent, but also had an unwavering confidence in his ability to succeed where 14 other competitors in 16 fights spread over seven years had come up short.

He told everyone he was going to beat Silva and become the new UFC middleweight champion, and then he stepped into the Octagon and did just that. > Watch: Fight Flashback

“It feels good when you prove yourself right,” Weidman says of his championship victory at UFC 162. “I had been telling people I was going to do it – I knew I could do it – but there’s always a question about going out there and doing it. So going out there and accomplishing my goals, showing that I had the talent and the hard work to do it was a good feeling.”

In the immediate wake of his victory and every time discussions of their rematch have risen, a familiar narrative emerges – “Well it wouldn’t have happened if…”

Despite the fact that Weidman controlled the opening frame with his wrestling and finished the fight a little over a minute into the second round, many of the conversations about his championship victory are framed by declarations that Silva gave the bout away by doing the same 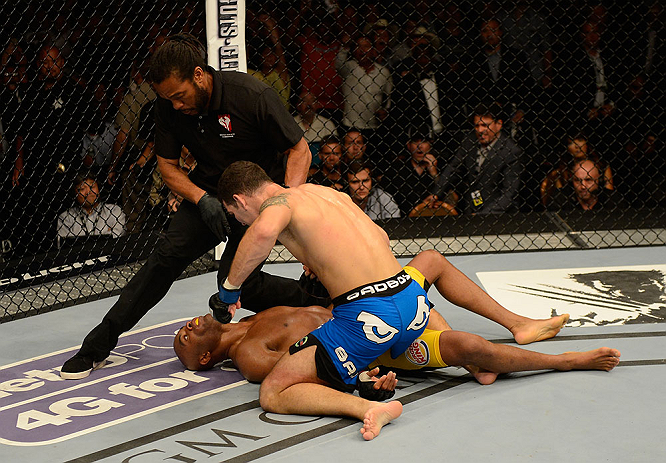 “drop my hands and clown” routine he’s done numerous times in the past.

In the six months since his victory, Weidman has had to listen to it all.

He’s heard fans and critics describing his championship victory as a fluke – giving Silva the lion’s share of the responsibility for the outcome, rather than crediting the new champion for doing what no one else had been able to do.

And that is why he’s so excited about Saturday night’s rematch.

Though Silva briefly flirted with the idea of not pursuing a second battle with Weidman, “The Spider” eventually set his sights on avenging his first and only UFC defeat.

It’s an opportunity Weidman welcomes readily, having felt like his performance in the first fight wasn’t as good as it could have been. Considering he controlled the fight from start to finish, that’s an intriguing proposition to ponder heading into Saturday night’s championship rematch.

“I just think my last fight I was a little sluggish,” begins the undefeated champion. “I had a year off (before the last fight). This fight, you’re going to see the best Chris Weidman, and I’m excited to go out there and show that. I’m ready for a war, but I’m going in there for the finish, and I feel like if I don’t finish him in a more exciting fashion this time, I’m going to be disappointed.”

Although it was a major talking point heading into the bout, the fact that Weidman entered the cage and upset Silva at UFC 162 after a 360-day layoff – “And two surgeries!” – has gotten buried leading up to UFC 168. > Watch: Weidman submits Jesse Bongfeldt

That doesn’t bother the unflappable Weidman – nothing seems to. As much as he’s annoyed by the “UFC 168: Silva’s Revenge” feel tomorrow night’s event has, the 29-year-old is singularly focused on putting forth any even more impressive effort in the encore and answering the lingering questions hovering around his rivalry with Silva once and for all.

“I’m in amazing shape right now, and I just feel like I’m going to see everything he’s doing on the feet, and that I have an answer for everything. If we were in a boxing match, I feel like I would beat him in a boxing match. I feel very comfortable everywhere – on the feet, on the ground. I’m just going to try to mentally break him – mentally and physically break him.

“Whether I’m sparring, doing jiu-jitsu, wrestling, or kickboxing, it’s just what is built into me – it’s a habit – and there is no better person to be able to do that to than Anderson Silva because everybody thinks he’s unbeatable and everybody thinks it’s a fluke that I beat him last time, so I’m excited to go out there and let people know the reality of the situation.” > Watch: Chris Weidman Live Chat 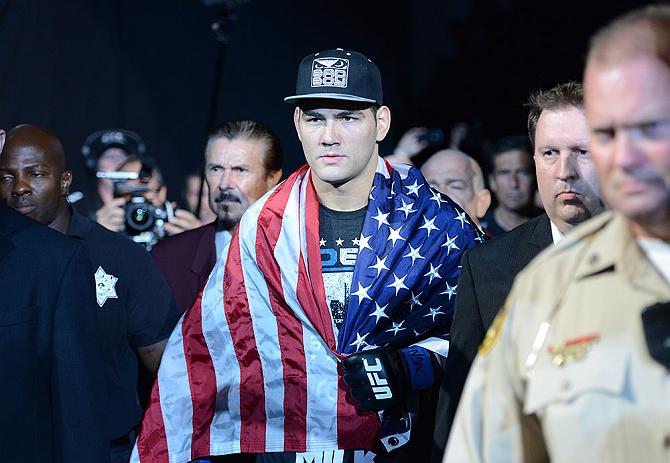 For the new champion, that means chasing new goals, reaching new milestones, and proving to all the critics and doubters that his first victory over Silva wasn’t a result of luck.

“This one is going to solidify me as champion and let everyone know that ‘Listen – Chris Weidman wasn’t a fluke. He’s going to be a guy that’s going to be on top for a long time and has a big future,’” he says of the UFC’s final fight of 2013. “I want to be known as one of the greatest of all-time, and I want to hold the belt longer than Anderson Silva held the belt.

“There are no more arguments,” he adds, his voice filling with emotion and energy for the first time. “There’s no more Team Weidman, Team Anderson Silva, was it a fluke? There’s no more arguing – on December 28th, the question will be answered.”