Chris Weidman: "It's My Time"

"I’m going out there to finish him. I have to go in there and make a statement to the world that it’s my time, and I’m not going to be happy unless I finish him." - Chris Weidman 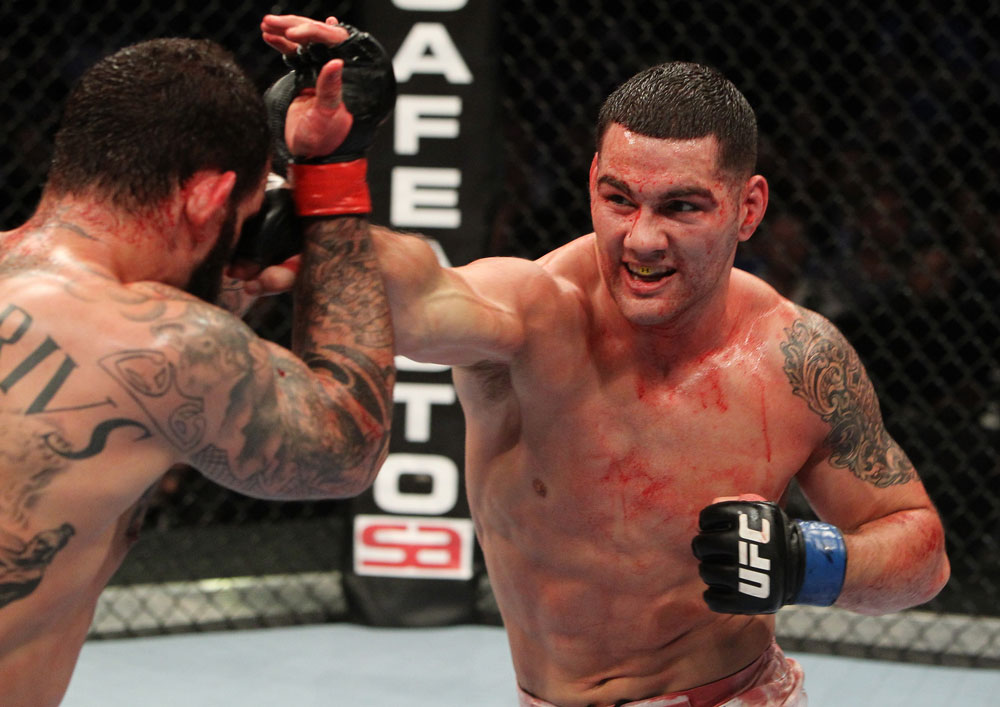 “I think when you have a goal, you have to live from that goal; you can’t just see it as a far-fetched thing,” says Chris Weidman, 29 years on Long Island tinting his voice. “You’ve got to live from it. If you wanted to buy a really nice house, but you don’t have the money for it, you have to visualize yourself in that house, in those nice rooms for a long time before you live in there. That’s the way I’m taking this fight.”

From the time he made the decision to shelve his Olympic aspirations in favor of forging a career in the cage, Weidman has had his sights set on Anderson Silva.

When he was beginning his career with four consecutive victories in Lou Neglia’s Ring of Combat promotion, his time in the gym under the direction of Ray Longo and Matt Serra wasn’t just spent preparing for the next fight; it was building towards the day when he would share the cage with Silva, the UFC middleweight title hanging in the balance.

A lot of fighters have talked about being the man to bring Silva’s incredible reign atop the 185-pound weight class to an end. So far, all nine that have tried have come up short, including former champion Rich Franklin, Dan Henderson, Vitor Belfort, and Chael Sonnen… twice.

Tomorrow night, the undefeated Weidman gets the opportunity he’s been working towards his entire career, and he’s intent on succeeding where everyone before him failed.

“I’m in this sport for one reason, and that’s to be champion,” he says flatly, more a declaration of things to come than dream scenario being put into words. “It would be a discredit to my family if I was in here talking and not believing in myself, not believing I’m the best in the world. It would be a waste of time.

“I’m not just talking the talk; I’m in there to win, and that’s it. There’s no point in this fight where it’s `I just want to see how I do.’ I know what it’s like to lose, and I know what it’s like to beat yourself, and I’m not going to let that happen. I’m not going to walk away from that cage saying, `Uh, I wish I would have tried this or that.’ I’m going full force and that’s it.”

Weidman wanted this fight last year, but for a while, it looked as if he was going to have to take a number.

After pushing his record to 9-0 with a savage second round knockout victory over Mark Munoz last July, the unbeaten contender called for a meeting with “The Spider.” Silva and his camp balked at the idea, suggesting Weidman was lacking both the experience and name value to share the cage with the middleweight champion, prompting the unbeaten Serra-Longo Fight Team product to sign on to face fellow unheralded contender Tim Boetsch at UFC 155.

And then things got interesting.

In late October, Hurricane Sandy ravaged the East Coast. Weidman’s house was part of the carnage. Less than a month later, a shoulder injury that ended up requiring surgery forced him from the showdown with Boetsch.

In early January, the UFC declared that a victory over Vitor Belfort would secure Michael Bisping a chance to fight for the middleweight title. After “The Count” came up short, Silva started throwing out names of potential opponents; Weidman’s was not one of them.

“It was definitely frustrating for a while,” he says of hearing Silva express his interest in fighting just about anyone but him. “I got to a point where I was like, `I don’t care. I’m going to fight whoever I’ve got to fight to get myself big enough to where there is no question that he’s going to have to fight me.’ It ended up that I didn’t have to do that.

“Everyone else that could have fought Anderson lost, and there was no other choice for him. (UFC Chairman and CEO) Lorenzo (Fertitta) and (UFC President) Dana (White) told him that he’s fighting me, and there was nobody else for him to start pointing fingers at.

“I just think everything happens for a reason,” continues Weidman. “When I had different setbacks – surgery, Hurricane Sandy, whatever – I always had a positive mindset that something good was going to come from this. I never got down. I stayed positive – it’s not the end of the world. I had kind of given up on the Anderson Silva thing, but I still had a feeling that something positive was going to come from it, and obviously it did.”

Saturday’s championship showdown was officially announced on March 6, and in the four months since, a wide assortment of fans, media, and fighters have voiced their belief that the undefeated challenger will depart the MGM Grand Garden Arena as the new UFC middleweight champion.

“It’s pretty cool,” he says of the support he’s received from his fellow fighters. “I have a lot of confidence in myself, but when you have peers that haven’t ever seen me train see something in me where they think I can be a champion, it’s definitely a nice feeling. It’s nice to have other peers that do this for a living have faith in me and believe I can do this.”

Over the course of his illustrious UFC career, Silva has developed an aura of invincibility; winning 16 consecutive contests on the biggest stage in the sport will do that for you.

Much like when opponents lined up to share the ring with Fedor Emelianenko in the midst of his dominant turn in PRIDE or when a young “Iron” Mike Tyson was laying waste to the heavyweight division in boxing, many feel that some of Silva’s opponents are beaten before they even step into the cage; the winning streak and repeated viewings of his previous highlight reel performances turning “I can win” into “Can I win?” by the time fight week rolls around.

Weidman isn’t thrown off by the Brazilian’s standing and stature with the sport. If anything, the fact that Silva is so revered only motivates him more.

“I know what I can do, and I know what I’m capable of based on the things I do in training and how hard I work every day. The fact that other people are so into this mystical creature that is Anderson Silva, that makes me even more excited to go out there and kind of disprove that, and shock the world.

“I love the fact that people think he’s that good, and I have this opportunity to show them how good I am. I want to be that mystic creature.”

The charismatic challenger laughs, but he’s completely serious. This is the moment he’s been preparing for his entire career.

This is the not only a chance to capture the middleweight title and end Silva’s near-seven-year-reign atop the division, but also a chance to prove the critics that said he wasn’t ready wrong, and begin building a legacy of his own in the sport.

This is his chance to unlock the door to that really nice house he’s always pictured himself living in.

“I think about winning, and I think about what it’s going to be like to be champion. I visualize myself holding the belt, and visualize the things that come from being champion, and I’ve put myself in a position to reach that goal.”

As much as he’s pictured himself with the middleweight title around his waist, Weidman also knows that when the cage door closes, there is no letting off the gas. Until his hand is raised and the words “And NEW UFC middleweight champion of the world” echo throughout the venue, the only thing he’ll be thinking about is continuing to dominate and assert his will.

It’s the same thing he’s been thinking since the start of training camp.

“The number one thing that (keeps you from getting caught up in the moment) is just to work as hard as you can every day. When you spar, you’re not looking up at the clock, thinking about how much time is left.

“If there is another second left on that clock, that’s another second for you to dominate this round. If you have mindset of just pressure and forward and what you’ve got to do, you’re not thinking about `I’m gonna win’ or how much time is left or `I’m almost there.’

“I’m going in there to use every second to my advantage, and there’s not a second that is going to go by where I’m thinking `I’m winning the fight right now; how do I keep this going?’ My mindset is going to be `How do I finish him? How do I make this more devastating? How do I be more impressive?’ When you have that attitude, you’re just thinking about continuing to do what you’re doing.”

For Weidman, that means more than just succeeding where the 14 fighters to come before him have failed; it means finishing the previously unbeatable champion on Saturday night.

“I’m going out there to finish him. I have to go in there and make a statement to the world that it’s my time, and I’m not going to be happy unless I finish him. I’m going in there to absolutely finish him, and come away with a dominating victory.

“The way to do that is just to be confident, and do what I do great; believe in myself, move forward, and go for the finish. I have to be aggressive and be relentless with my attacks, and look for the finish.

“I want to set myself apart from everybody else in the middleweight division.”