Chris Weidman - Impatience is a Virtue

"This is awesome, but I’m not satisfied where I’m at. I have to keep winning and I have to get that belt." - Chris Weidman 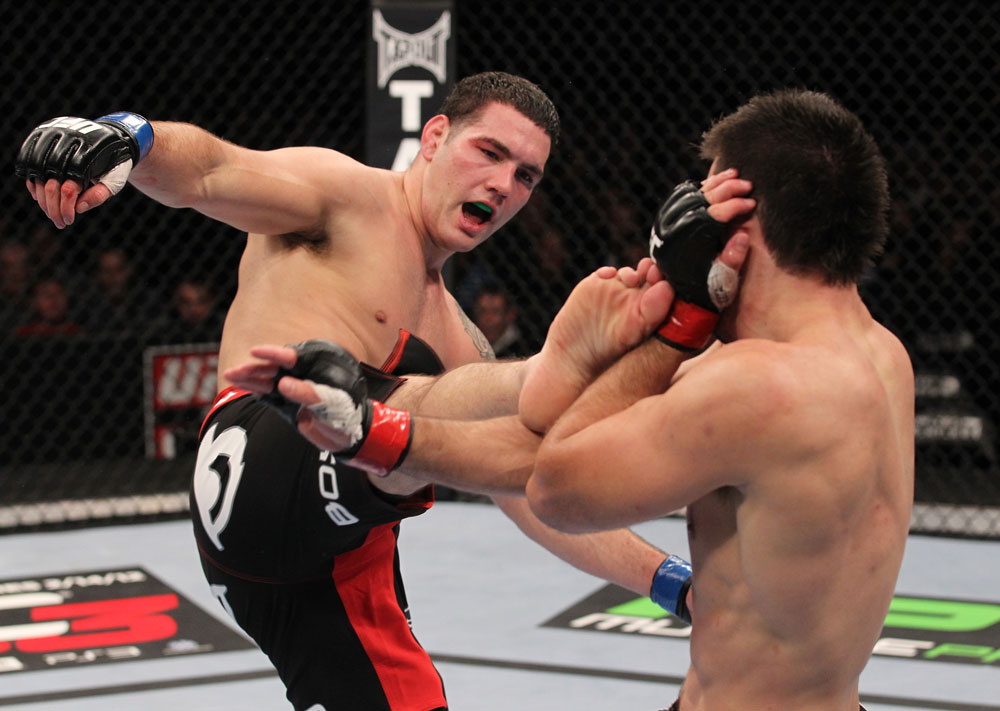 Patience is a virtue. It’s not one possessed by UFC middleweight contender Chris Weidman though. Not now. Not ever. Not even as a kid.

“I always got caught in tag because I always got really close to whoever was “it” and was just trying to mess with them,” he laughs. “I took risks to make it fun, but I was always getting caught first.”

No one’s really come close to catching him since, especially not in mixed martial arts, where he owns a perfect 8-0 record that includes four wins in the UFC. But that impatient streak remains for the former All-American wrestler, and that’s not necessarily a bad thing, as his desire to compete against the best and be the best is something you always want to see from our sporting heroes.

“I take it one fight at a time, but I’m always trying to press up to the best competition,” said Weidman. “My managers, they wanted me to take my time, but I was always trying to look towards the top and getting closer to the top. So I wasn’t looking to take fights with guys that were supposed to be on the same level at that time. I was trying to go another step further to challenge myself, and with doing that, I guess things came a little faster.”

A little faster may be an understatement. After just four fights, the Hofstra grad had garnered a substantial amount of buzz around the New York / New Jersey area as one of the top middleweight prospects around. But even his staunchest supporters may have held their breath a bit when he accepted a short notice UFC fight against veteran Alessio Sakara in March of 2011. A fractured rib wasn’t going to help him either, but as soon as the fight began, Weidman fought like an old pro, and at the end of three rounds, he had his first Octagon victory.

Back-to-back finishes of Jesse Bongfeldt and Tom Lawlor followed, and then that old impatience kicked in when he took another short notice assignment – this one against former world title challenger Demian Maia – in January. What followed was a harrowing 32 pound weight loss in just 10 days, and while he wasn’t in peak form, Weidman showed his talent and heart in decisioning the Brazilian contender. Yeah, he took some risks, but he also reaped the rewards.

“I’m trying to look at the big picture, stand outside the box and look at everything from the outside,” he said. “And the reality is that my career is not gonna be forever, so I want to try and make the best of it. I don’t want to look back and say ‘aw man, I wish I would have taken that fight then,’ or this and that. I’m just gonna go with it, and if I lose because I took a fight on short notice or I take a fight that some people wouldn’t want to take, at least I took that chance, and when I’m 50 years old, I want to look back and know that at least I gave it a fair shot and tried to do the best with the abilities that God gave me.”

So if you’re wondering if stepping up to a UFC on FUEL TV main event against top contender Mark Munoz is a big leap for Weidman, it may or may not be, but the Long Islander can’t wait to find out.

“I’m just going in there and trying to compete and really competing against myself and trying to test myself and see how much I can push and do everything I think I can do,” said the 28-year old. “I just have to do the best I possibly can and that’s all. Win or lose, I’ll be a happy guy.”

Well, he may be telling a little white lie there, because it’s not likely that Weidman will be happy if he leaves the HP Pavilion with a loss tonight. He’s a winner, he always has been, and he hopes that with another victory – and not just any ordinary victory but a major, jaw dropping one, he’ll be the next in line for the man at the top of the 185-pound weight class, Anderson Silva.

When this interview was conducted last week, the conversation turned to Silva’s July 7th title defense against Chael Sonnen. Weidman admitted to being a big fan of Sonnen’s, but for selfish reasons, he was rooting for the champ to retain his belt.

If you like Chris Weidman, married father of two, as a person, that would be a good call, because he is a great ambassador for the sport. But if you read the above statement and didn’t immediately respect him as a fighter, what’s wrong with you? Here’s an up and comer with an 8-0 record saying that he would prefer that perhaps the greatest fighter of all-time wins his fight so that he might get a crack at him. How can you not love that attitude?

He laughs when you point it out to him, but that kind of honesty is worth addressing. For all the ‘I’m just looking at this fight and nothing more’ talk you usually hear, the truth is that most people do take a peek beyond what’s immediately on the doorstep. Weidman is just the one who admitted it. So how does he keep it all together for this fight knowing what might await him down the line should he win?

“Without beating Munoz, all the other stuff goes away, so I’m completely focused on Munoz and winning this fight in a spectacular fashion,” he said. “I wouldn’t be happy just winning this fight barely. I really want to make a statement, and it’s not gonna be easy. It’s gonna be a really tough challenge, and Munoz is definitely a tough dude, so we’ll see what happens.”

Chris Weidman says that as long as he gives his best, he’ll be happy, no matter what the final outcome of his fight is. That may or may not be an accurate statement, but fight fans should be happy with whatever happens tonight in San Jose because whether his hand gets raised or not, Weidman is here to stay, and he has every intention of fighting whoever it takes to make it to the top. And in this case, it’s impatience that’s his virtue.

“This is awesome, but I’m not satisfied where I’m at,” he said. “I have to keep winning and I have to get that belt, so I haven’t had a chance yet to sit back and reflect on what I’ve been doing. It’s just more additional pressure to keep moving forward and keep winning. That’s it.”