"Fans are going to see a confident and hungry young guy who is going in
there to win and to fulfill his dream of becoming UFC champion by
defeating Anderson Silva." - Chris Weidman 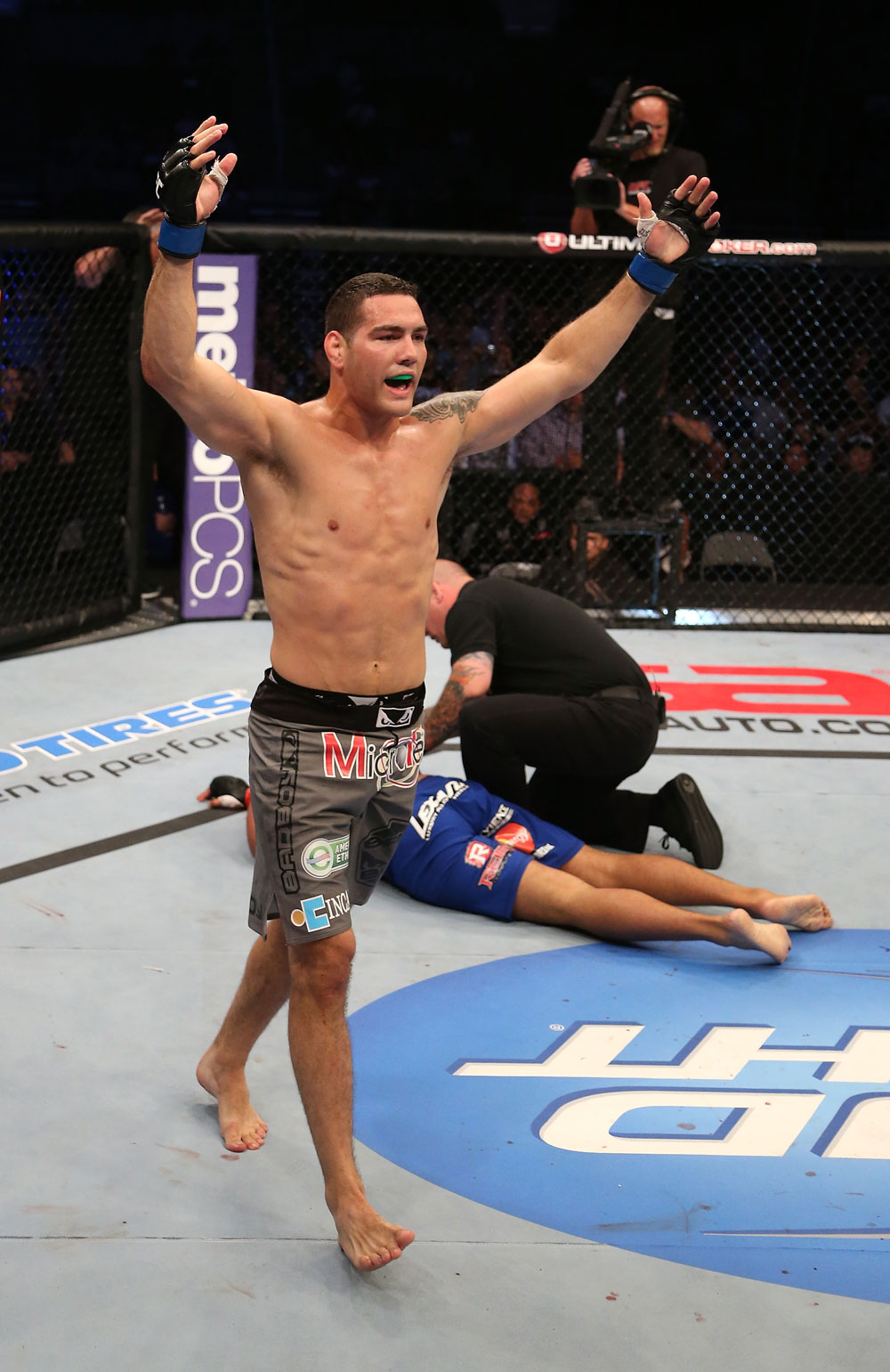 The campaign is officially over and the biggest fight of Chris Weidman’s career has become a reality. Earlier this week the UFC announced the 28-year-old Long Island native would be the next fighter to challenge Anderson Silva for the middleweight crown this summer at UFC 162 on July 6th in Las Vegas.

The opportunity to face the long reigning 185-pound king is a challenge the Ray Longo-trained fighter has been dreaming about since his career in mixed martial arts began, and in every sense, facing the UFC’s most dominant champion and a pound-for-pound great is the chance of a lifetime.

Weidman understands the matchup with the fighter widely considered to be the greatest mixed martial artist of all-time will bring his career to a new pinnacle. If he can accomplish what 14 other men that have come before him were unable to do, a career spent as one of the sport’s brightest prospects will reach mega-watt status.

“This is the fight I have been envisioning myself having since I started in MMA,” Weidman said. “Silva was the champion when I started and I have reached a point where I feel I can beat him. Now I have the opportunity to prove to myself that I can. It’ a dream matchup and it’s an honor to fight the greatest of all-time.

“Fans are going to see a confident and hungry young guy who is going in there to win and to fulfill his dream of becoming UFC champion by defeating Anderson Silva.”

As his bout with “The Spider” became official, it brought a hectic and dramatic chapter of Weidman’s life to a close. Following an impressive victory over fellow contender Mark Munoz last July, the former two-time All American wrestler appeared to have placed himself firmly in the contender’s tier of the middleweight division. With the victory, Weidman began to lobby for a title shot, but his attention quickly shifted away from his MMA career when Hurricane Sandy severely damaged his Long Island home.

By the time he was ready to return, the window to put together a fight with Silva had closed and Weidman took a bout with Tim Boetsch at UFC 155 in December.

Unfortunately for the undefeated middleweight, a shoulder injury would force him out of the bout with “The Barbarian” and the surgery which followed would serve to keep him on the sidelines for the next several months.

The circumstances at hand could have easily knocked Weidman out of the title picture, and there were a handful of other fighters looking to step up into the role of number one contender. But as luck, fate, or the brutal reality of the fight game would have it, potential title challengers Michael Bisping and former light heavyweight champion Rashad Evans were both turned back in their moments to shine.

When the chaos of the middleweight division finally ceased, Weidman was the last man standing at the ready to face Silva. To make sure his name remained in the conversation, he took to Twitter and interviews in the MMA media landscape to keep his bid for a title shot in the ears of the UFC brass.

“This is the entertainment business and you have to stay in people’s line of sight,” Weidman said. “You can’t just fight and then disappear. You have to make yourself stand out as much as possible to make sure people are constantly thinking about you. I put myself out there as much as I could and it paid off.

“Without a doubt it was crazy and I’m glad everything worked out for me. I feel like everything happens for a reason. I went through some tough times and everything ended up working out for me regardless. I need to win this fight and make the most of this opportunity. I feel like this is going to be the start of my career.”

Weidman’s journey to lock down the fight was a challenge onto itself, but now he will prepare to face the most difficult task of all. In the nearly 20 year history of the UFC, there has never been a fighter as dominant as the Brazilian champion, and the Team Black House fighter has built his legacy off making highlight reel material out of nearly every opponent he’s faced inside the Octagon.

The New York native understands the unique challenges Silva presents inside the cage, as the 37-year-old’s power and pinpoint accuracy have dealt out punishment to every man who has stood across from him under the UFC banner. That being said, defeating both the man and the mystique--and the championship gold that will come with the victory--are all the motivation Weidman needs to prepares for the greatest challenge of his career.

“[Silva] does a great job of making you feel as if you don’t belong in the cage with him before and during the fight. The key thing is to truly believe in yourself and know that you belong in there. You have to focus on what you do best. I definitely feel a lot of guys he’s faced before have been beaten before they ever stepped foot inside the cage.

“I’m expecting this fight to go everywhere. I’m not going to be desperate for the takedown. I don’t want to rely on that alone, and I’m going to be mixing it up as much as I can. I definitely feel that in any fight, you want to take your opponent where you have the advantage, and wrestling is going to be my advantage in this fight. But we’ll see how things are going on the feet. Most likely I’m going to be looking to work my takedowns and submissions, but I’m going to be very aggressive no matter where I am. On my feet or on the ground, I’m going to be aggressive.”

During Weidman’s campaign for Silva, he proposed a scenario that put the icing on the cake of what could potentially be an epic year. The number one contender told the media in Chicago, after he defeated Silva on the 4th of July weekend in Las Vegas, he would grant him an immediate rematch at Madison Square Garden in November.

The New York City venue is a landmark in combat sports. Unfortunately, at this time, mixed martial arts is not sanctioned in the Empire state, but Weidman and the UFC are hoping this situation will soon be resolved.

“Defeating Silva and then a rematch in New York would be the best year I can imagine without a doubt,” Weidman said. “I was just lobbying in New York for MMA. Hopefully this gets pushed through and mixed martial arts becomes legal in New York. It would be amazing for everything to work out timing wise and I would get to fight in my home state. That would be a dream scenario.”