"My goal is to be world champion and hold that for a while, so I’m
taking it one step at a time, and my next step is Demian Maia." - Chris Weidman 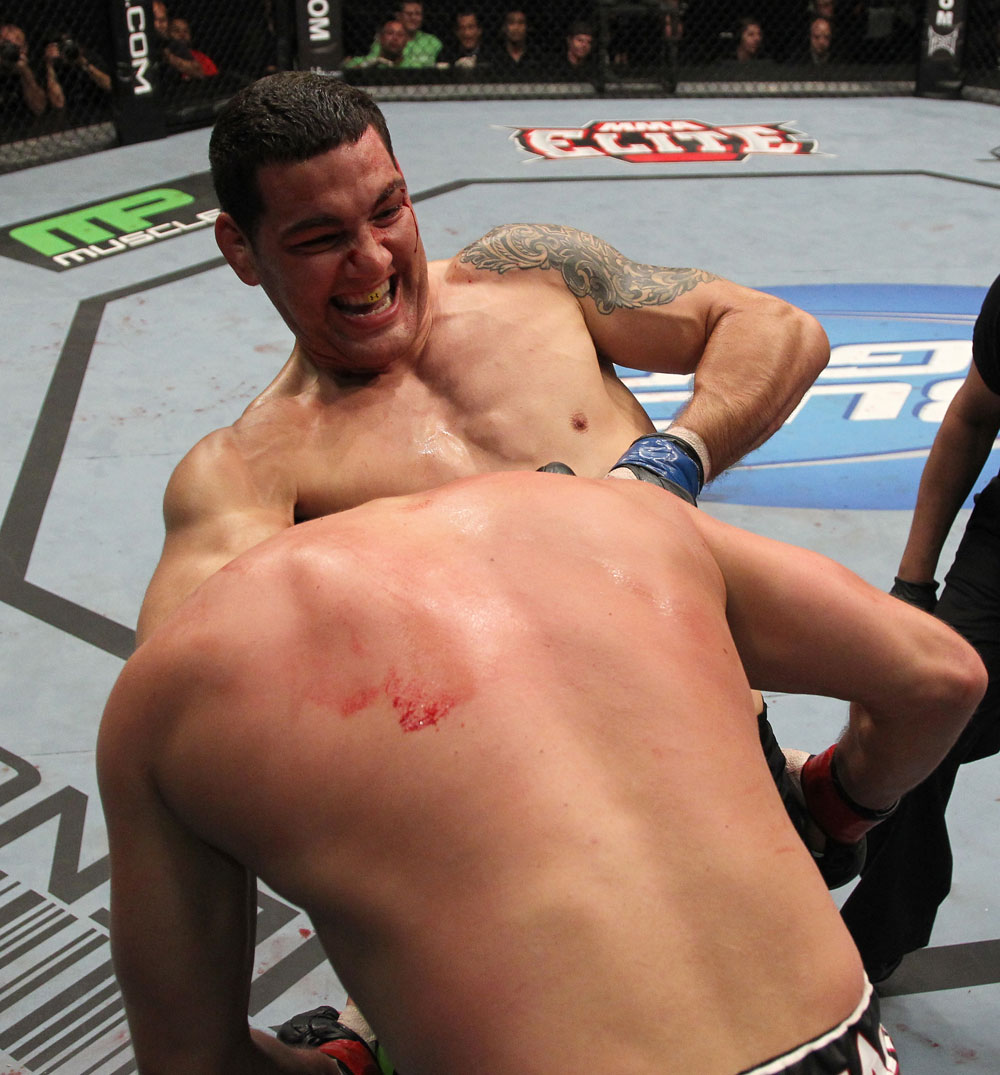 Some people will always stick to the safe path in life, never deviating from the course they’ve already charted, disinterested in exploring the possibilities that come with turning left when your destination is to the right.

Chris Weidman is not one of those people.

The 27-year-old UFC middleweight answered the call to fill the opening opposite Demian Maia this weekend as a part of the UFC on FOX 2 event, taking the most challenging fight of his young career on just 11 days notice.

“I know I’ve got my undefeated record and all that, but I’m looking at the positives. If I win this fight, it’s huge for me,” explained the Hofstra University graduate. “It’s huge for my life, it’s huge for my family, and I’m willing to take the risk of possibly having a loss — which I don’t think is going to happen — because of what a win would mean.

“I’d be in title contention at that point. I’d be exactly where I wanted to be in my career. This is exactly what I wanted, and it’s awesome. I’m going to make the best of it. I’m going to go out there and exert as much energy as I possibly can to try and win that fight.”

Weidman has been through this process before, having made his UFC debut on short notice against veteran knockout artist Alessio Sakara last March. It was a risky proposition for the All-American wrestler with just four fights under this belt, but the Baldwin, New York native never hesitated, then or now.

“I said the same thing as this time – ‘Let’s do this!’” Some people thought I was crazy then, but it’s similar. It was high reward, low risk taking a fight on short notice against a tough veteran like Sakara, but at that point, I’m in the UFC, where I want to be.”

After using his high-level wrestling to earn a unanimous decision win over Sakara in his debut, Weidman posted back-to-back first round submission wins over Jesse Bongfeldt and Tom Lawlor to close out 2011. Pushing his record to 7-0, the Matt Serra-Ray Longo trainee entered 2012 as one of the top prospects in the sport, and he wasn’t going to pass up the chance to take a giant step closer to reaching his goal of becoming a UFC champion.

“I know I can do this; I know how hard I can push, and I know about my weight cut. I know I’m going to go in there and fight as hard as I can, no matter how I was training or how my camp was. Having that experience of doing it is big. Before the Alessio Sakara fight, I took a fight on two weeks’ notice.

“My goal is to be world champion and hold that for a while, so I’m taking it one step at a time, and my next step is Demian Maia.

“But this whole thing is surreal,” Weidman admitted with a laugh. “I’m fighting on FOX. It went quick, and I’m excited about it. This is where I’ve been dreaming to be, with the guys I’ve been watching. I think I can beat them, and I want to be where they’re at, and now I’m there, so it’s time to make the best of it.”

While some people would caution Weidman about the risks of facing a former title challenger and top 5 competitor like Maia on short notice, recent events in his life help the unbeaten talent to keep things in perspective.

The day after accepting the biggest fight of his young career, Weidman attended the wake of his uncle, Freddy Weidman, a Vietnam veteran who was awarded the Purple Heart and Silver Star for his service.

“He put himself at true risk,” Weidman said of his uncle, who passed away unexpectedly last week. “With platoon after platoon of the Vietnamese shooting at him, he had to run out to an open field, grabbing more ammo because his team was out of ammo, and bring it back. On top of that, he got blown up with a grenade, and had a bunch of difficulty throughout his life because of that.

“Imagine that — running out into a field when guns are firing at you, and you don’t know whether you’re going to die; that’s risk. Getting into a cage to fight, doing something I love to do is not a risk.”

Weidman wasn’t expecting to return to action until April, but the opportunity to return to the Octagon against an established veteran on network television was too good to pass up.

Maia is easily the toughest opponent to date for Weidman, a sharp and sudden bump up in competition. No one would have questioned him if he chose to stay on course for an April return, and few would fault him if he were to incur a loss to the Brazilian standout under these conditions.

But plans change, and Weidman intends to make the most of the latest last-minute opportunity the UFC has presented him.

“There’s always risks, especially in the UFC because you don’t want a loss on your record, but whatever — you only live once. I’m young, I don’t want to miss opportunities; I want to go out there and make the most of them.

“I think it’s a good matchup for me; I like it. I’m excited to really show my overall game in this fight, and have fun with the whole thing. I’m 100% focused on Demian Maia, and I just feel like nothing good is going to come out of me losing, so I have to win this fight.”