Chris Weidman And Others Join USO Tour To Support Troops

"It's A Once In A Lifetime Opportunity To Go And See Men And Women That Are Sacrificing So Much."
By Thomas Gerbasi • May. 22, 2019

It may be safe to assume that with the nickname “The All-American,” Chris Weidman wasn’t about to refuse a request from Monster Energy to join a USO tour visiting troops overseas earlier this year. Then again, nickname or not, the former UFC middleweight champion was all in for the multi-country trip.

“I definitely couldn't say no, but when we got asked to do it, I was super excited,” said Weidman, who has joined by fellow UFC fighters Felice Herrig and BJ Penn, as well as celebrity chef Robert Irvine, former MLB star Shane Victorino, country music artist Craig Morgan and pro surfer Makua Rothman for General Paul J. Selva’s fourth USO tour since he became vice chairman of the Joint Chiefs of Staff.

“It's a once in a lifetime opportunity to go and see men and women that are sacrificing so much while in warzones like Afghanistan and Iraq,” continued Weidman. “You see them in their environment, one that is obviously so risky, and they're working crazy hours throughout the whole day. Sometimes we forget that there's a war going on and we have all these people over there putting their lives on the line every single day. So to be able to be there and see it, it just made it way more apparent how much we owe to all these people that are sacrificing time with their families, and the goals they had outside of the military, they had to put that aside to head out and work.”

Making stops at several bases across the globe, Weidman admits that he felt “very protected” while with General Selva, but at some stops, it was clear almost immediately that this wasn’t the normal trip. 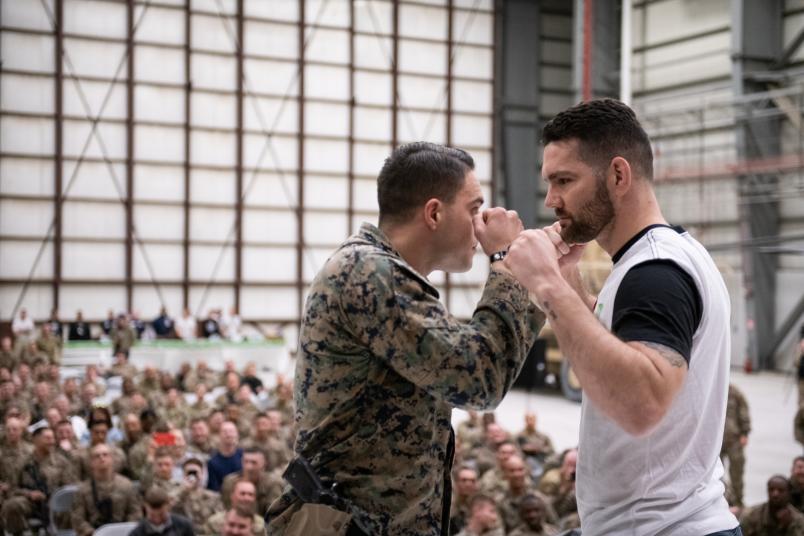 Chris Weidman faces off with a member of the United States military during a portion of his USO Tour visit overseas (DoD Photo by U.S. Army Sgt. James K. McCann).

“When we arrived in some of the warzones, there were guys up high with sniper rifles, very active, looking around and making sure we were covered,” said the New Yorker, but not surprisingly, for someone who loves the adrenaline rush that comes with competing in the Octagon, being in places where danger could be lurking around every corner brought its own share of adrenaline.

“To be honest, I wasn't really scared, but I was excited,” he said, even if there was a scare one morning.

“At one point we heard gunfire at four in the morning,” Weidman recalled. “We were walking to get coffee and we heard gunfire when we were in Afghanistan. We hid behind a truck, but then everybody was normal.”

Tragically, on April 9, less than a week after the tour ended, four Americans, including FDNY firefighter and U.S. Marine Christopher Slutman, were killed by a roadside bomb in Afghanistan.

“You're with the scariest group in the region for sure, so you feel safe, but then you hear stories like that and it reminds you that it's still going on,” said Weidman. “It's crazy.”

Those sacrifices are a reminder of what servicemen and women are giving up while deployed, which makes tours like this all the more important to keep morale up and give those serving a little taste of home and an escape, even if only for a few hours. And how many people get to see and hear Chris Weidman singing? 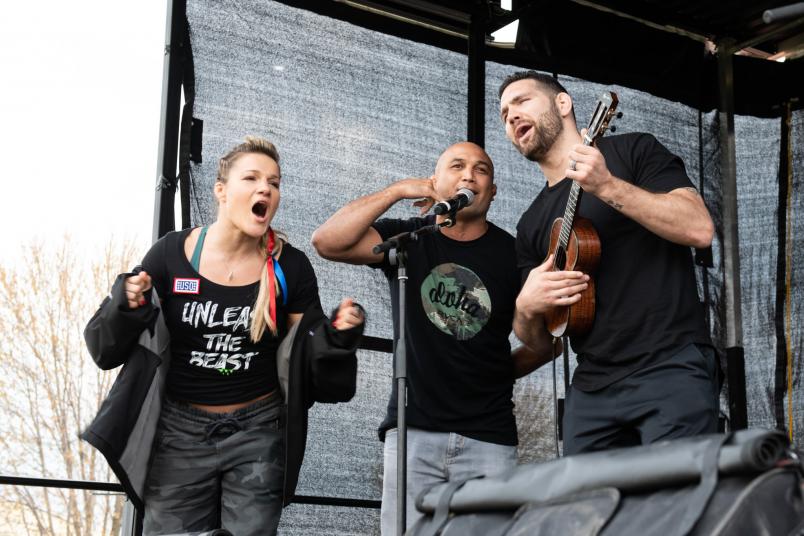 “We always sang at the end with Craig,” he admits. “Towards the end I started loosening up. (Laughs) I was jumping in with the band and singing with them and playing the drums.”

Here’s hoping some video exists of these show-stopping performances, but in all seriousness, Weidman knows what the tour meant to those in attendance, and it meant just as much to him.

“I felt very special to be able to be there and have these men and women that I look up to look up to me and give them an escape from a serious thing that they have to focus on every day,” he said. “They were so happy to have us there, they really were. And their jobs are tough. There's no hanging out, there's no alcohol on base, no partying. There is no fun. So for us to come in and give them an escape, they were like babies with candy, they didn't want it to end. And it was really cool to be able to give them those moments. They treated us so well. It was an amazing trip.”