Chris Wade: No Looking Back 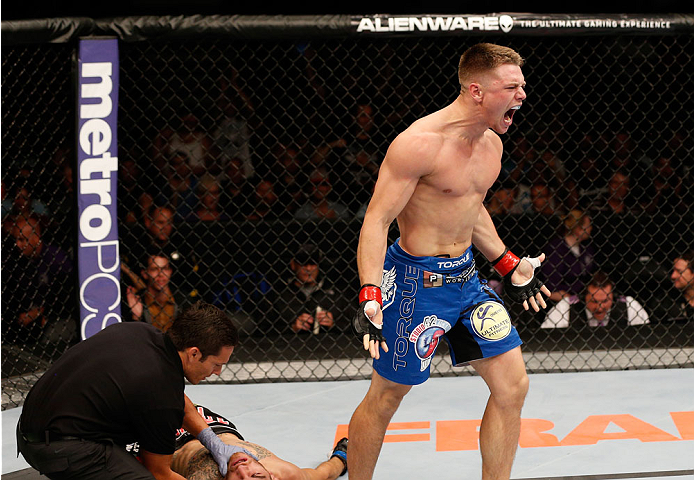 Chris Wade understates things a bit when he says that his first UFC fight last August “really couldn’t have gone any better.”

A 72-second submission of Cain Carrizosa at UFC 177 marks his debut as one of the best of 2014, but he hasn’t been sitting back and celebrating. As soon as that fight was over, it was back to the gym to wait for the next one, which comes up Sunday in Boston against Zhang Lipeng.

The win was impressive though, mainly because he shattered any semblance of the first-time UFC jitters.

“I really tried my best to keep it all in perspective, just to look at it as another fight with another guy in another cage,” he said. “Because in reality, that’s all it really is. A lot of people like to make more of it than it needs to be. They (the jitters) tried sneaking up on me a little bit here and there (laughs), but I’ve got some good, experienced coaches who work with me and keep me working toward warming up and not really thinking too much about that.”

With the victory, Islip’s Wade became the latest member of the Long Island MMA contingent to make his mark in the Octagon. The rush of talent from the area into the promotion over the last few years has been nothing short of remarkable, and it shows no sign of slowing down. Yet the most impressive part of the whole thing isn’t the level of fighters being produced, but the way they all get along in this most competitive of businesses.

“Everyone kind of knows everybody, there’s this sense of camaraderie and it’s really cool,” Wade said. “Everybody kind of cross trains together and helps one another. There’s no sense of dislike toward one gym or another, that we’re not gonna help these guys. Everybody bands together and helps everyone, and it’s really a unique situation. For us, it’s like Long Island against the world. Every time one of our guys steps in there, I’ve got the TV on or the Pay-Per-View ordered and I’m rooting them on.”

Currently training at Long Island MMA and Studio 42 Kickboxing, the 27-year-old still finds time to work with some of his fellow UFC standouts like Al Iaquinta and Chris Weidman, picking up some helpful advice from the middleweight champ leading up to the Zhang bout.

It’s good advice that Wade will certainly heed, because now that he’s here in the UFC, he’s not about to make an early exit, especially knowing what it took to get here.  A standout high school and college wrestler, Wade later turned to MMA, making his pro debut in November of 2011. As he worked his way up the ranks, he kept his day job working for Budweiser distributor Clare Rose, yet after three pro victories, the tug of war between his work life and fight life began to wear on him.

“I was kind of burning the candle at both ends,” he said. “It started to wear on me. I was having issues with my back, and I started to have issues with fatigue, where I wasn’t really getting the focus that I’d had in the past in training.”

His coaches saw the same things Wade was feeling and they sat him down to discuss fighting full-time.

“They said ‘We’ll help you any way that we can, we’ll keep you on your feet as you make the transition, and we really think you can do this.’”

In July of 2012, Wade made the move to full-time fighter. He left Clare Rose on good terms, with his former work mates still behind him every step of the way, and while there were some doubters around him, he wasn’t about to let them influence him, even when he lost the lone fight of his career to Ozzy Dugulubgov in March of 2013.

“Some people had some things to say that I really didn’t want to hear,” Wade recalled. “There were some grumblings about me getting a ‘real job,’ but I’m pretty strong-minded. I have a pretty unique perspective on life, and I don’t let anybody sway what it is I want to do with my life. We only get one go-round on the whole thing, so I want to do something that I’m gonna enjoy, that’s going to make me fulfilled and make me happy.”

And that’s fighting. So if the idea of facing a like-minded foe in front of a packed house in Boston’s TD Garden would be intimidating to most, it’s not to Chris Wade.

“This guy is the champ of the world and me and him are going to war with one another,” he said of this Sunday’s bout. “I expect this to be a hard-fought fight and I’m not gonna overlook him.”