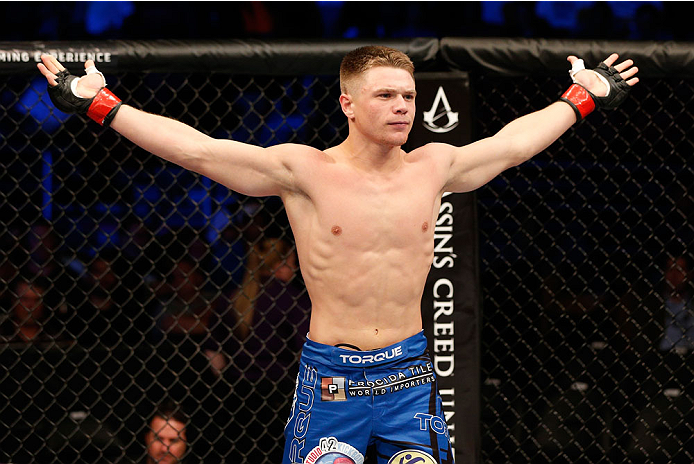 When Chris Wade enters the Octagon this Saturday to face Christos “The Spartan”  Giagos at UFC Fight Night: Boestch vs Henderson in “The Big Easy,” he admits he will be facing the toughest test of his fledgling UFC career.

“He’s very challenging,” Wade, who is undefeated in two UFC fights, said.  “He’s probably the most well-rounded fighter I’ve competed against so far. He can do a little bit of this and a little bit of that anywhere the fight goes. He can strike, he can scramble, and he can transition and get to a submission if he gets an opportunity, so he’s a little more dangerous than the other two guys I fought in the UFC.”

Little known to the UFC crowd, at lightweight, Wade is big and strong for the division. The New York state wrestling champion and former Ring of Combat lightweight titleholder stands 5’10” tall, and cuts down from about 180 pounds. He’s a grinder with heavy hips, and if he gets to a top position on the ground, he makes it very difficult for his opponent to get anything going in terms of offense.

“Coming into this fight the game plan is to put it all together,” he said. “I know that’s vague, but it has meaning to me as far as all the things I’ve been going over, and coupled with my athleticism, I am capable of a lot more than what I’ve been showing. I need to turn it up and accelerate and do things that other fighters aren’t doing. I can do the stuff Anthony Pettis does but I don’t. I get in a mode where I want to grind out the victory and end up resorting to basic stuff, as opposed to really letting my hands go, letting my submissions go.”

Long Island is a gritty section of New York. For a long time, lacrosse and soccer were the predominant sports there, but over the last decade a number of wrestling standouts turned mixed martial arts fighters have put a bright spotlight on the region.

“When I was kid I was in the stands when Chris Weidman won his state wrestling title,” he said. “I saw Gian Vilante win his state title. Nobody really talks about this, but my senior year in high school, me, Iaquinta and Dennis Bermudez all wrestled the same weight in the same state and we all competed against the same guys. Now we’re all in the UFC. Us Long Island guys aren’t messing around.”

Wade is primarily a wrestler, but says his stand-up game is heavily influenced by American kickboxing.

“A lot of people ask me if I have taekwondo training,” he said. “I don’t know why, but my kicks really do look like I do. I guess it’s just the way I move, but I don’t have any formal martial arts training like a lot of guys. I am very athletic and I’m a quick learner. I’ve only been in MMA for four years now. I have a great support group here, but it’s not an easy go, that’s for sure.

Indeed, pursuing a UFC career is not an easy endeavor. Wade, who has a one-year-old daughter and shares a home with his brother and his girlfriend, used to keep “the lights on” while training by working the graveyard shift for a local Budweiser distributor, hauling cases of beer from 11pm to 7am daily.

“I would go right from the job to training, and then they moved me to 3pm to whenever shift, and we would get out at like 2am, so I would go from training right to work. I coached high school wrestling too, anything to keep the lights on,” he said.

Now that he’s in the UFC, he knows that with a full-time commitment to his craft, he’s taking a calculated risk that, if done correctly, can gain massive returns.

“Look, Chris Weidman is just like me, and look at him now,” he said.  “Al Iaquinta and I go at it in the gym, and then I watch him put it on some of the world’s best fighters in the cage. It’s a good measuring stick for me. It lets me know where I sit. I may not have been presented with the opportunity yet, but it’s right there. With a win against Giagos, I’m hoping to get a big name next.”

But don’t think Wade is looking past “The Spartan.” As he said earlier, this is going to be his true measuring stick as to where he sits.

“With Christos I have to focus on every aspect of mixed martial arts,” he says. “If I start to get one sided he’s going to take the fight in a different direction. If you get sloppy striking he’s not afraid to go underneath a wrestler and shoot and take you down. If you back up and let him bully you he will put you against the cage and throw big shots and try to finish the fight, and if you shoot without setting up your shot, he’s going to scramble and take your back and look for a submission.”

Wade says he is inspired by Frankie Edgar and Khabib Nurmagomedov.

Both fighters are great MMA wrestlers, and he says Edgar’s recent performances against Cub Swanson and Uriah Faber in the featherweight division were master classes in transitions, and something he and his coaches have been studying.

“Frankie Edgar is the best in the business when it comes to seamlessly transitioning from striking to takedowns,” he said. “His opponents have no idea if he’s going to throw more punches or kicks or get taken to the mat. It’s that confusion that gives him such an edge over everybody. He’s just so hard to figure out. And as these transitions start to come together for me in that same, seamless way, coupled with my power – when I come forward I hit hard - if I can get to that level of skill I am going to pose a lot of problems for my opponents.”