Chris Kelades: Timing is Everything 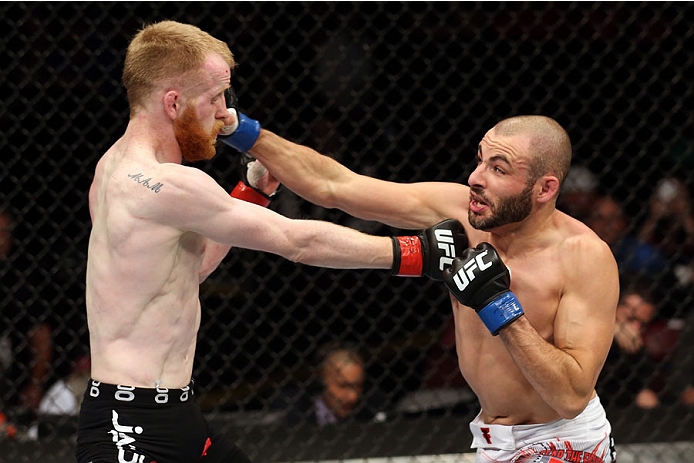 The vast majority of the time when UFC matchmakers Joe Silva and Sean Shelby call fighters on the regional circuit and offer them an opportunity to fight in the Octagon, they hear the word “Yes” before they even mention an opponent or a fight card.

“Would you like an opportunity fight in the U…”

The first time they called Chris Kelades, the 33-year-old flyweight politely turned them down. While the chance to compete under the UFC banner had long been a goal of “The Greek Assassin,” the fight was at bantamweight and he wasn’t far removed from a hard-fought split decision win over Canadian veteran Adrian Woolley. Rather than rush into a tough fight up in weight, he opted to pass.

In late September, just a handful of days before the UFC was scheduled to make its debut in Atlantic Canada, Kelades’ phone rang again. Rob Font had been scratched from a main card bout against Canadian bantamweight Mitch Gagnon on the October 4 fight card in Halifax. Once again, the Cole Harbour, Nova Scotia resident politely declined.

Soon after, his phone rang for a third time and this time, Kelades said, “Yes.”

“The second time I was like, ‘This is crazy – you don’t say no twice,’ but the timing was perfect with everything,” he laughs in hindsight.

Kelades filled in for former Ultimate Fighter contestant Louis Gaudinot against Paddy Holohan on five days’ notice. The SBG Ireland product was unbeaten at the time and coming off a first-round submission win over Josh Sampo in his organizational debut three months earlier in Dublin, but now it was Kelades’ turn to thrill the partisan hometown crowd.

After getting taken down and threatened with submissions multiple times in the opening frame, Kelades rallied to level the fight at one round each heading into the third. Over the final five minutes, the local veteran outworked his Irish counterpart to earn a unanimous decision victory. Later that night, he was informed that he and Holohan had earned Fight of the Night honors and a $50,000 bonus as well.

“I don’t know if it has really, truly sunk in or if I just thought about it happening so much that it wasn’t really a shock when it happened the way it did,” he admits, four months removed from one of the more memorable UFC debuts of 2014, but Kelades has no intention of resting on accolades that accompanied his October win.

“It’s been awesome, obviously, knowing that I’ve made it to the stage that I want to be at, but now it takes twice as much work to stay here than it does to get here. That’s where my thoughts are at now. Enjoy it, relish it a little, but at the same time, don’t get stuck on that part of it,” the self-described late bloomer says. “It was the culmination of everything up until that point and now I’m looking to the future, looking to put a stamp on what I’ve already done and just keep progressing forward.”

With his debut win under his belt and a full camp behind him, Kelades gets the opportunity to chase his second victory inside the Octagon this weekend when he squares off with 21-year-old prospect Ray Borg in the opening bout of Saturday’s UFC Fight Night main card in Broomfield, Colorado.

Like Kelades, Borg made his UFC debut on short notice as well, jumping into a bout with gritty Roufusport representative Dustin Ortiz just 15 days after picking up a second-round submission win over Team Jackson-Winkeljohn fighter Nick Urso on the regional circuit. Though he came out on the wrong side of a split decision against Ortiz, “The Tazmexican Devil” impressed and, two months later, he opened even more eyes with a slick, first-round submission win over Shane Howell.

“My coach Scott (MacLean) said to me after the fight in Halifax that my next opponent would probably be Ray Borg because when he looked at the division at the time, there was really nobody that was coming off a win that wasn’t tied up for a fight,” Kelades says, acknowledging his coach’s clairvoyance. “The way the division is, you can almost look at it, see who is going to fight who and make up the plans as they go and know who is going to be the next guy.

“It’s going to be a good fight and I think the UFC realize it as well. We’re the first fight on the main card and I think they see that there is the potential there for both of us to climb the ranks and entertain the fans at the same time.

“He’s young, he’s an up and comer and he’s definitely somebody who is going to be someone to look out for in the future,” he adds. “But at this point, he’s got to get around me and I’ve got to make a statement against him.”

Doing so could put the Fit Plus product on the fast track in the 125-pound weight class.

Champion Demetrious “Mighty Mouse” Johnson is currently without an immediate challenger and has already earned victories over six of the fighters ranked in the Top 10. To complicate matters further, John Lineker’s struggles to make weight have led to the Brazilian being handed a one-way ticket the bantamweight division, leaving the division in flux as the first fight card of February approaches.

“There is definitely a weird limbo thing happening in the Top 10 where guys have already fought Demetrious and there is nobody there that is really coming up, so anything is possible in this division. You put together a few wins and good things can happen.