Chris Kelades Shakes It Up Before Beal Bout 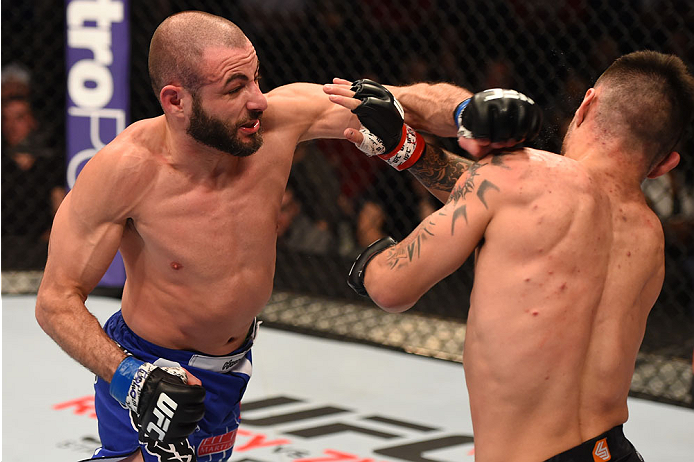 After a February loss to Ray Borg, UFC flyweight prospect Chris Kelades wanted to shake things up a bit. His first night in Florida wasn’t exactly what he was looking for though.

“We were just waiting for this apartment where I was staying to get finished, and I had an incident with someone who was getting a little rowdy with his woman, and it turned out that I ended up having to subdue him a little bit to calm the situation,” Kelades explained. “It was my first night too, and I was like ‘oh wow, where am I staying and what is going on?’”

He laughs, recalling his moment of chivalry, but at the moment, he knew he wasn’t in Nova Scotia anymore.

“I just thought ‘well, this is gonna be an interesting trip,’” he said, “I watched my back for a couple days and then I got comfortable again.”

Soon, his regular apartment was ready and he got down to the business of training with the stalwarts at the American Top Team gym.

“I think anytime you have a loss, you reflect a lot more than you would off a win, and I wanted to spread my wings a little bit and put myself in a position to have to be challenged and grow as a person and an athlete, and you have to leave your comfort zone for that to happen,” Kelades said. “And that’s what the push was for this one. I needed to experience some new things training and spread my wings a little bit.”

While at home, the 34-year-old still trains with his usual team at FIT Plus, but as he gets ready for his third Octagon bout against Chris Beal this Sunday in Saskatoon, it was ATT, and while the training in Coconut Creek is top notch, it’s always a risk to make a change midstream, especially on the UFC level, where one bad camp can lead to one bad loss and no one needs that. Kelades wasn’t concerned though.

“I wouldn’t say there were nerves, but it was definitely a calculated decision,” he said. “I came down for a week and tried it out, and the guys were really inviting, the coaching staff was awesome, and just everybody that they have here was very involved and very encouraging towards me training, and it was great to experience, so I felt comfortable coming here. It’s a little bit of a journey, and I’m leaving my wife and my family and the whole comfort zone, so that was the hardest part. As far as the switch, I think when something’s meant to be, you calculate it the best that you can, and when things fall into place the way they did like they did with this, you know that you’re making the right decision.”

A pro since 2009, Kelades was on the verge of having to make a decision on his MMA career before the UFC called him for a short notice to face Paddy Holohan in October of 2014. It was the perfect “Rocky” story – the local kid getting his chance to compete in the big show and keep his career alive. Kelades delivered, decisioning Holohan and picking up a Fight of the Night bonus. The loss to Borg evened out his Octagon record, but as he approaches the Beal bout, he has already experienced more than many of his UFC peers in terms of highs, lows and everything in between.

“I’ve definitely experienced the gamut of emotions, that’s for sure,” he said. “I don’t mind the short notice fights. I think the last fight, having all of that time that I had to prepare kind of weighed on me a little bit. It was three months from when I found out about that fight with Ray Borg to when it actually happened, and that was something I hadn’t experienced before. I’m used to two or three weeks, bang, get ready. And that’s what I really appreciate about this fight coming up with Chris Beal is that I haven’t had months and months to think about it. There’s a lot going on, which kind of takes the mind factor out of it because you can sit and dwell on things too much, and this has kept me right up to speed and pushing forward and that’s what I like.”

So is this a fresh start for “The Greek Assassin?”

“It definitely feels like a new chapter,” he said. “I’ve come at this a little bit different in the preparation by being somewhere else and with my focus, so I feel like it’s a new level for me. I’ll continue with the same story, but it’s definitely gonna be on a new level as far as what I can do performance-wise, and I’m excited for the opportunity.”