A knee-injury halted Chris Gutierrez' momentum, but the bantamweight prospect is making the most of his time.
By Thomas Gerbasi, on Twitter @tgerbasi • Apr. 29, 2020

Chris Gutierrez may be just three fights into his UFC career, but the bantamweight prospect has seen plenty in his seven years in the fight business.

Once you hear the story about the “host hotel” and the chicken feathers (among other things) found in his room before a fight early in his career, that should be enough to stamp him as a seasoned veteran, even if it was his first (and thankfully last) time experiencing such a thing.

Unfortunately, the facility employee with the hazmat suit sent to clean up the mess couldn’t say the same. 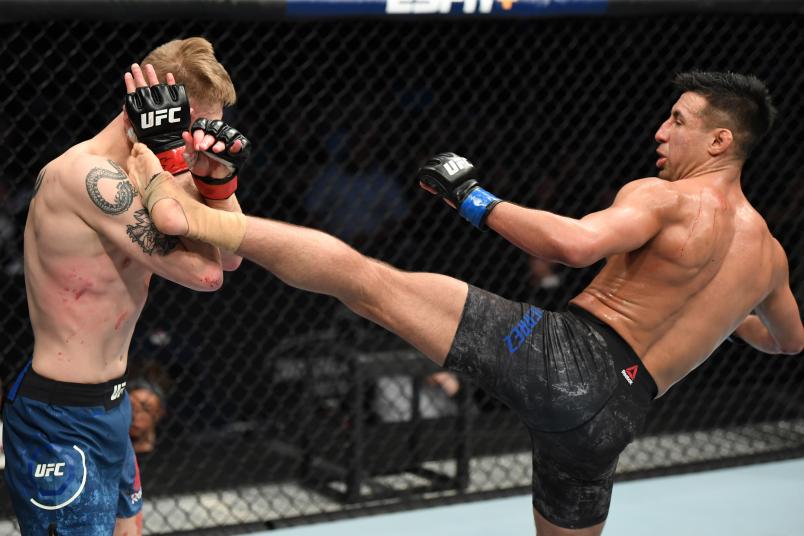 And what about the time Gutierrez’ bag was stolen while he was taking a post-fight shower, leaving him to walk through the casino in his boxers and a shirt? Or his fight with Aaron Phillips in Baton Rouge where the bay doors wouldn’t close, leaving the pair to fight in 30 degree cold?

Oh, what a long, strange trip it’s been, leaving Gutierrez more than happy to now be on the UFC roster.

“Being in the UFC, we're spoiled,” Gutierrez said. “Thinking about some of the stuff you've been through, it makes you appreciate it that much more. And it's nice to see how the scenery changed, but I don't take those times for granted because it made me the person I am and I got to see a lot of things. Trust me, I've seen a lot of things. (Laughs) I'm blessed to be where I'm at and my job is to keep winning these fights and keep climbing the ladder.”

After a loss to Raoni Barcelos in his Octagon debut in November 2018, Gutierrez has been winning fights and climbing the ladder. He got his first UFC victory in March of last year against Ryan MacDonald, then he decisioned Geraldo de Freitas last August to make it two straight in one of the sport’s toughest divisions.

But life has a way of making you slow down sometimes, even when you don’t want it to, and with two minutes left in the de Freitas fight in Uruguay, Gutierrez got his notification that it was time for a break when he tore his ACL. Immediately, he knew things were bad. 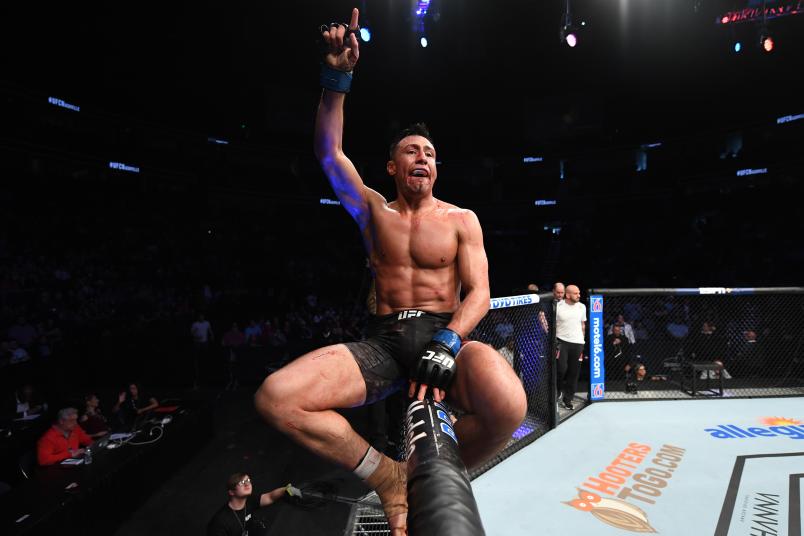 “Absolutely,” he said. “That's not an injury where you go, 'Eh, nothing happened.' No, you feel it. I had like two minutes left and I knew I had to get the job done. I didn't want to lose because of an injury. I told myself I got two more minutes; I can suffer now and deal with the consequences after. I knew I was in trouble, but I wasn't gonna give up from that.”

“It would have been a completely different fight,” admits the Colorado product, who got the decision win, then hoped for the best but expected the worst when he went to the doctor. He got the bad news and prepared for a long stretch on the sidelines. It wasn’t an easy road after his September surgery, but by the time he was cleared to return in February, he took the setback for what it was while appreciating what that time off gave him.

“As an athlete, that's a career-ender and it derails people, so I went through my little phase of depression because it puts a hold on everything,” he said. “But you find the bright side of it and you actually get to work on a lot. The full recovery is seven to nine months and there's no way around it. I told myself I have to find the positives in this, otherwise I'm gonna go off the deep end. I managed to get myself out of it, and I had help too, and I found the positives. I was able to get more things done in the case with my son, I was able to focus a lot on myself, I met my girlfriend through that time, and a lot of positive things happened. You take things for granted when you're constantly on the go, so I got to find the positive things in it, and I'm happy and I believe it happened for a reason. I hate to say it, but I wouldn't have it any other way.”

The 29-year-old admits, “The first day back (in the gym) was very scary,” then the COVID-19 pandemic hit, putting the sports world on pause for a spell. The fight cards postponed in March and April didn’t affect him, as he wasn’t expecting to return until June or July, so for now, it’s just about staying in shape until the call comes.

“I think with my time frame, I'm okay,” he said. “I'm staying active, doing some roadwork, doing a lot of shadowboxing, just working out at home. It's very different for everybody, but I'm just trying to stay positive and do the most I can.”

And when he returns to the Octagon?

“I want to fight as many times as I can,” Gutierrez said. “Hopefully, I'll fight two or three times before the end of the year.”