Chris Fishgold Walks Through the Storm

Chris Fishgold went head on into training once he got a taste of MMA
By Zac Pacleb, on Twitter: @ZacPacleb • Jul. 12, 2020

Chris Fishgold was just 13 years old when he was telling anyone who would listen that one day, he would step into the Octagon and compete in the UFC. He hadn’t trained in anything to that point, but few come with higher and unabashed ambition than that of a teenager. After a couple years bouncing around different martial arts classes, he watched a grappling class and decided to see what it was all about. Rather quickly, he found out there was plenty for him to learn.

“I remember kids, dead skinny, smaller than me choking me out,” Fishgold told UFC.com. “I was like, ‘Whoa, they can do that? I need to get better at it.’ From there, every day I went, literally twice-a-day, every day I started going.”

Just a few years later, Fishgold went pro, and the grappling bug that bit him hard at 15 became his bread-and-butter as he racked up 12 submissions out of 17 wins before getting the UFC call. It hasn’t been all gravy since then, though.

Fishgold is 1-2 in the Octagon, but his stoppage losses to Calvin Kattar and Makwan Amirkhani didn’t send the scouser into a tailspin. Instead, he learned something surprising about his skill set.

“To be honest, how good my striking was,” Fishgold said. “On the domestic scene, I was always a grappler. I like grappling. I never went into a fight to strike, and then when I fought Kattar, obviously one of the best strikers in the UFC full-stop at any weight, I was outstriking him. I felt like I was outstriking him. To see what he’s done against Jeremy Stephens and Ricardo Lamos, stuff like that, straight away they were out. With Makwan, he was saying, ‘I’m going to box your head off.’ I realized with my striking, I can hang with anyone in the striking aspect. Also, from a loss, I’ve realized I never let the loss get to me. I was just like, ‘F*** it. Go back to the drawing board and let’s go.’”

While brushing off the losses has come easy, Fishgold isn’t allowing for complacency in his training despite the coronavirus pandemic. He says he is the kind of guy to learn his lessons quickly and not get “caught slipping” the same way twice. With a desire to show the UFC brass his worth as a fighter, he trained harder than he ever has in his career. While that’s often a fight week cliché, Fishgold actually this is the first time he feels like he gave “110 percent” in camp. 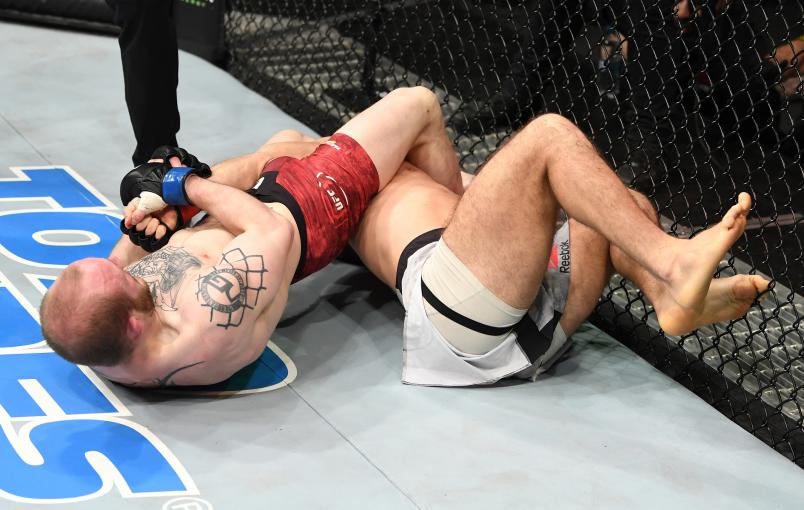 PRAGUE, CZECH REPUBLIC - FEBRUARY 23: (L-R) Chris Fishgold of England works to secure an arm bar submission against Daniel Teymur of Sweden in their featherweight bout during the UFC Fight Night event at O2 Arena on February 23, 2019 in the Prague, Czech Republic. (Photo by Jeff Bottari/Zuffa LLC/Zuffa LLC via Getty Images)

PRAGUE, CZECH REPUBLIC - FEBRUARY 23: (L-R) Chris Fishgold of England works to secure an arm bar submission against Daniel Teymur of Sweden in their featherweight bout during the UFC Fight Night event at O2 Arena on February 23, 2019 in the Prague, Czech

So, with that in mind, he and his team at Next Generation MMA in Liverpool went to work ahead of his bout with Jared Gordon, who is also looking to gain some traction after losing three of his last four bouts.

Even though Fishgold’s submission record might make a person anticipate a grappling-heavy approach, the Liverpudlian is well-aware of the fastest way to rise up the featherweight rankings.

“I want to entertain,” he said. “The UFC rewards you for entertaining fight, not just winning. I’d rather lose an exciting fight than win a boring fight, if that makes sense. I hope he stands up with me because he’s a go-forward fighter and swings, and I’m a go-forward fighter, and I’ll swing. If we both want to meet in the middle, fans will get what they deserve, but I don’t know. He’s coming off a loss. He might want to get the win, be a b**** and lie on top of me for three rounds. I hope he doesn’t, but I’m ready if he does want to do that.”

A lot of fighters say they want to go forward and bang, but the actual number of ones who take that attitude into their bouts is lesser. As the saying goes, everyone has a plan until they get punched in the mouth. In Fishgold’s case, however, eating a punch and walking forward is all part of the plan. Some might advise against that thought process, but it’s an attitude deeply engrained in him.

“It’s the city where I’m from,” Fishgold said. “Liverpool, obviously, we have that fighting spirit, and if you want to stop me, you will literally need to finish me. I will need to be knocked out or I would need to be put to sleep, so that’s pretty much it. I keep on going forward.”

That walk through a storm attitude only works if you can give a beating back, which is exactly Fishgold’s thinking. He can’t help it, either. He said while some on the roster see themselves as an “athlete first,” he views himself as a “fighter first,” once again crediting that philosophy to the city that raised him.

It’s a mindset that anyone could respect. Now, he just wants to couple that with a bounce-back win in the Octagon to jump start his desired climb up his division’s ladder. Beating Jared Gordon on Fight Island July 15 is the first step to that plan, and although he wants someone in or near the top 15 next, he welcomes anyone who might doubt the scouser’s authenticity as a fighter.

“If any other fighters want to question that, you only need to tweet Sean (Shelby) and say, ‘I want to fight Fishgold,’ or chat s*** about me,” he said. “I’ll happily show you.”