Chris Daukaus Is Where He Belongs

“Absolutely not,” the heavyweight contender says without a hint of hesitation. “I, of course, miss the people I worked with and those relationships. I'm still close with a handful of guys and girls that I worked with, but as far as missing the actual job, I do not miss that job one bit.”

Considering that the husband and father was walking the beat on an overnight shift and putting his life on the line every time he had the badge on, that’s no surprise, but you have to ask anyway, because having 250-pound men swing hammers at him on a nightly basis in the Octagon is no piece of cake either. But the difference is that as a mixed martial artist, Daukaus is loving every minute of this.

For example, before his first UFC main event last December, Daukaus turned down nothing when it came to media obligations in promoting his bout against Derrick Lewis. The 32-year-old would go on to lose for the first time as a UFC fighter in Las Vegas a week before Christmas, and when it was over, he gave full credit to the Houston banger, but also felt that maybe, just maybe, he was a little scattered leading into the biggest fight of his career.

“I’ve learned how to prioritize and say no to some of the things I was taken into,” Daukaus said. “There were certain interviews that were in the middle of my training sessions I would try to do, and I was giving other people extra footage and more access to what I was doing. I was falling in love with that stuff and really living in that moment of getting all the social media and everything like that when I should have been focusing more so on the task at hand. And it's definitely gonna be different with this main event.”

This main event is a Saturday showdown with No.4-ranked Curtis Blaydes in Columbus, Ohio. And while Daukaus doesn’t want to repeat the same pre-fight scenario as he did against Lewis, that didn’t mean he didn’t enjoy the whole process the first time around.

“Oh yeah, it's super fun, obviously, but I'm the type of person that if I'm focused on one thing, that's really what I have to focus on to accomplish that goal, and looking back on it now, if I'm being a hundred percent honest with myself as a professional, there were certain times leading up to that fight where I wasn't completely focused. I'm not taking anything away from Derrick Lewis; he's Derrick Lewis for a reason, and he does that to a lot of people, but I felt my head and my heart weren't fully in there for some reason, and I'm not really sure why.”

Like he said, Derrick Lewis does what he does to a lot of people; that’s why he’s the UFC’s all-time knockout king. And while Daukaus accepts that a clean shot from Lewis would be lights out for anyone, he also admits that there were other things that went on in the fight that needed fixing.

“I obviously can't take anything away from Derrick Lewis and the skill set that he has,” he said. “He turns a lot of people unconscious in an Octagon, and that's what he did to me. But there's also mistakes that I made that I had to correct: letting him back me up, letting him push the pace when it got close to the cage and me not moving. He threw a whole barrage of punches, and looking back on the video, I stayed there, just trying to hard cover and weather the storm and he just kept going and going. And you can't do that against Derrick Lewis. Clearly, my last fight is a blueprint of what not to do against Derrick Lewis, especially in the smaller APEX cage. He completely shut down my movement by backing me up on the cage. If I was ever to fight him again, I'm definitely not fighting him in the APEX cage.”

Daukaus laughs, clearly happy to be out of the APEX and in Nationwide Arena for this weekend’s bout, but the fights don’t get any easier when you’re a Top Ten heavyweight, and he knows what he’s in for against Blaydes.

“He has the most takedowns in a heavyweight fight in UFC history, and he is the leading UFC heavyweight in takedowns,” said Daukaus. “He's the best, in my opinion, at wrestling in the heavyweight division. So I'm not expecting anything crazy from him. He shoots a big blast double, he's good against the cage with trips and redirects and he's really comfortable on his feet. He was standing in front of (Jairzinho) Rozenstruik, throwing some bombs, and especially with his stance switches, he's getting really comfortable doing that. His feints, his up and down movement, he's really, really good and I have to not be able to bite on those things and I have to be able to really push the pace on him. He tends to lead the dance while we're in there, and I have to be able to stop that and put him on his back foot. It's a helluva lot easier to wrestle when you're coming forward, but if I can get him going back and make him uncomfortable in certain positions, I guarantee that I'll be coming out there with my hand raised.” 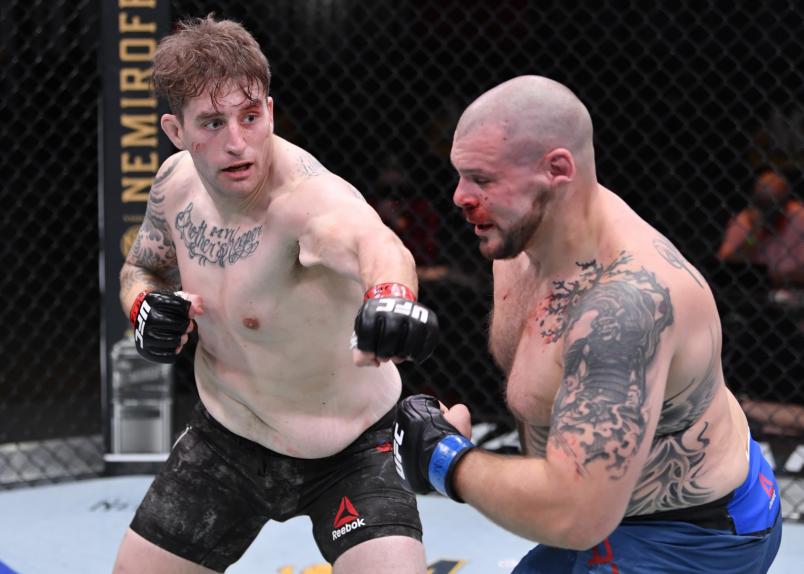 Daukaus is confident, not cocky, and while their fighting styles are different, in being pros, Daukaus and Blaydes are kindred spirits. So there won’t be bad blood, trash talk or any incendiary pre-fight comments. These are two gentlemen prizefighters ready to get after it for 25 minutes or less this Saturday. And Daukaus is just fine with that.

“The UFC doesn't really just give out main events to random guys on the roster, so I'm obviously doing something right, either love me or hate me.”

He laughs, admitting that his former gig as a cop has rubbed some the wrong way. I don’t know about that, but if that’s what motivates the Philly heavyweight, whatever works, use it.

“Whether they want to see me get knocked out again or want to see me get beat up for 25 minutes, I'm just trying to prove everyone wrong and show that I truly do belong here and I truly belong in the top of the UFC heavyweight division. It's my second main event under the UFC banner and I'm gonna be headlining an actual Fight Night in front of fans in a packed stadium and I really can't wait.”