Chris Clements: Worth the Wait

"I finish every fight I can and it’s the only way I know how to fight. I don’t know how to point fight." - Chris Clements 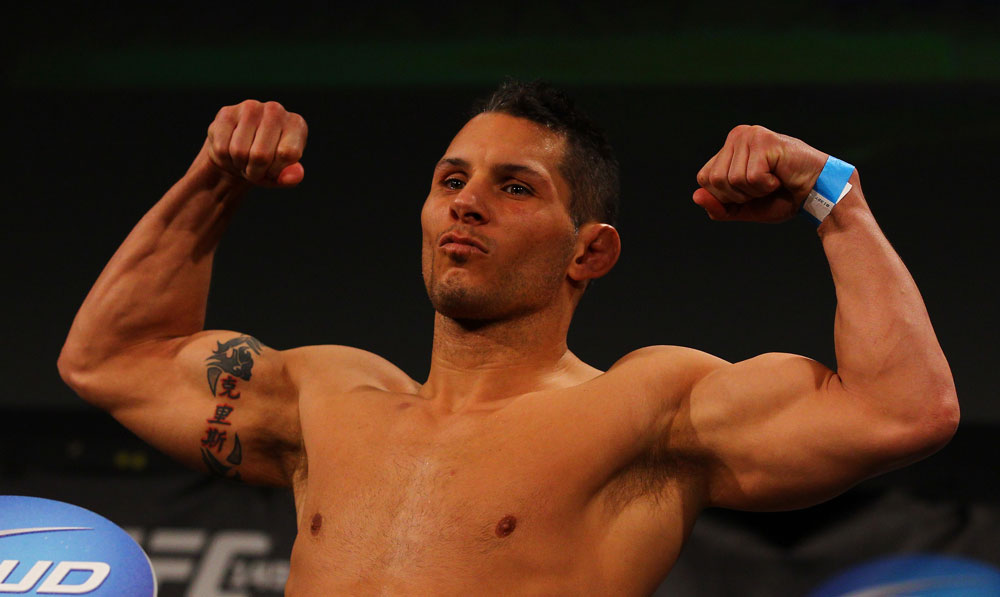 Chris Clements is fired up.

It has been over a year since “The Menace” has traded leather inside the Octagon and he’s been champing at the bit to get back to action. The 37-year-old Ontario native has been on the shelf with a series of injuries, and while a layoff of that caliber can present some unique hurdles for a fighter, Clements saw the break as a much needed recuperation period.

Since seizing a short-notice opportunity to face Keith Wisniewski at UFC 145 in April of 2012, the fighter formerly trained by the late great Shawn Tompkins has been stepping into the Octagon in banged up condition. After battling through the regional circuit in northeastern Canada for years, the call from the UFC wasn’t an opportunity he was about to pass up, and Clements fought through the pain in order to make his dream a reality.

But those are issues of the past. After successful surgeries and his first full training camp in years, Clements is ready to get back to business.

“The layoff was good,” Clements said. “It gave me some time to work on things I wasn’t able to work on before. A lot of people don’t realize that when I got hired to the UFC, I was getting ready to have surgery when they called me. I couldn’t say no. I fought both of my fights without training camps. I couldn’t jump. I couldn’t wrestle or do jiu-jitsu. I basically couldn’t do anything but jog. I could hit pads maybe once a week, but then I would be off for five days with soreness because my shoulder was on fire. The surgeries repaired some major damage and were successful, but I fought both of my UFC fights in that condition.

“It’s been great to train. I’ve had no pain in my shoulder and I’ve been traveling around to a lot of gyms and getting a lot of work in that I wasn’t able to do before. It just felt good to be in a training camp and get my mind focused on the right kind of work.”

Returning to the most competitive stage in mixed martial arts is a challenge with many interesting wrinkles, most of which Clements has mentally prepared for. When he makes that walk at the Air Canada Centre on September 21, it will be less of a shock than his previous trips to the cage.

He’s felt the eyes of thousands of people on him. He’s stood under the bright lights of the Octagon as another fighter who is also looking to make his dreams come true prepares to bring his best. Clements might not have experienced the unique environment of a UFC card in 15 months, but with a healthy body and a mind ready for war, he’s beyond excited to get back to work against Stephen Thompson at UFC 165.

“I feel like it’s a fresh start,” he said. “It’s good when you are fighting often because you get into a zone and it is another day at the office…especially with the UFC. You are around all those people and you come out to a big screaming crowd. Even in the Matt Riddle fight, I was the only Canadian on the main card and wasn’t used to that eruption of the fans and the explosion of lights. It kind of hits you a little bit. My first fight with the UFC was a prelim on Facebook. There weren’t a lot of people in the crowd and it didn’t really affect me at all. My last fight, that kind of hit me a little bit.

“I’m having a little bit of a hard time wrapping my head around all that is going to come, but once I get there, ‘The Menace’ will kick in, and I’m going to enjoy it. Once I’m in there I think it will all come right back to me, but right now, it is a little different.”

While the dream of earning his place on the UFC roster was a dream come true for Clements, another goal high on his list of priorities will be accomplished on Saturday night. His hometown of Chatham, Ontario is less than two hours away from the bustling metropolis of Toronto, and fighting on the sport’s biggest stage in his own backyard is a moment he’s been striving for since his career began.

Those wishes will finally materialize at UFC 165 and with family looking on and friends who finally understand what he does for a living, the moment simply does not get bigger where Clements is concerned.

“I’ve been waiting for this moment for so long,” Clements said. “One of my goals after making it to the UFC was to be able to fight at home. My shoulder was healed up in time and I could have fought earlier, but I told my management to hold me off as long as possible in the hopes the UFC would put me on this Toronto card. This fight will be only an hour and a half from my home and all of my family will be able to experience the UFC with me in it.

“The UFC is becoming so popular and I’m excited to be a part of it,” he added. “I’m happy people actually know what I’m doing. I’m a pioneer of the sport in Canada because I’ve been doing it for nine years professionally now. People would have no clue when I told them what I did. I would say I fought inside a cage and they would ask me if I ever fought The Undertaker. It’s nice to be doing something that is now so mainstream.”

The table may be set for the biggest moment of his career to take place, but there is a stern challenge obstructing his path in Thompson. “Wonderboy” came into the UFC fold as a highly-touted karate champion, but after making an impressive debut back in 2012, the South Carolina-based fighter has battled through adversity.

The 30-year-old striker suffered through a wrestling clinic at the hands of Matt Brown, then edged out Strikeforce veteran Nah-Shon Burrell at UFC 160 back in May. While the victory over Burrell put him back into the win column, it didn’t serve to re-ignite the hype that came after his debut, and Thompson is eager to regain that momentum.

Clements is hungry as well, and he believes the fans are going to be treated to a show at UFC 165.

“I think we both pose a puzzle for one another on the feet,” Clements said. “I like to pick my spots and be tricky. I choose my time to be aggressive. Whether he wants it to be that way or not doesn’t really matter because I’m going to impose my will on him. He came a long way and he’s worked on his wrestling a lot since the Matt Brown fight. I’m expecting the best Stephen Thompson we’ve seen yet. I’m looking forward to beating that Stephen Thompson.

“I’m going in there looking to do damage,” he added. “I never had a decision in my career until I faced Keith Wisniewski. I’ve only lost by submission and I don’t see Stephen Thompson having the same ground game as guys like Jonathan Goulet and Rich Clementi and other guys who’ve had me on the ground. I’m not worried about him submitting me and that is the only way I’ve ever lost. I finish every fight I can and it’s the only way I know how to fight. I don’t know how to point fight. All I know is to go in there and try to hurt someone and finish that fight.”