Chris Clements: Smarter and Younger in His 'Old' Age

"I think people have finally realized that training camp is not the time to increase your skill. Training camps are for getting in shape to go to war for three to five rounds, depending on the fight." - Chris Clements 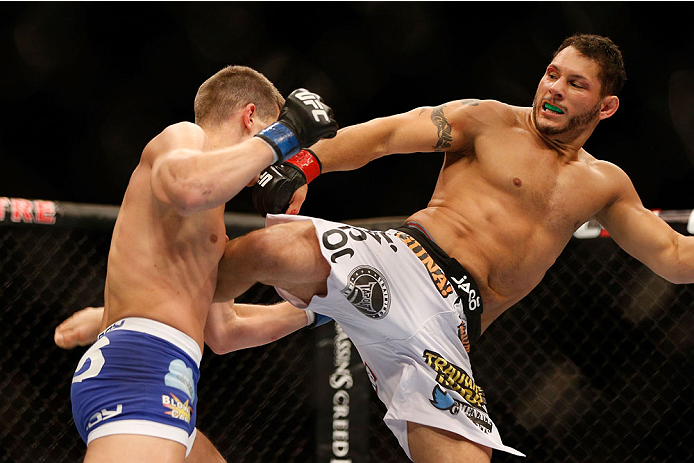 Canadian veteran Chris Clements is about to board a 24-hour flight across the world to Australia, where he will put his skills to the test against TUF Nations alum Vik Grujic.

The two welterweights will clash at UFC Fight Night: Rockhold vs Bisping on Friday, November 7th in Sydney’s Allphones Arena.

“I haven't really dissected him skill wise,” the 38-year-old Clements says. “I watched him fight a few times but I don't really try to analyze what my opponents are good with, because I've made the mistake of thinking I need to avoid situations and then come to find out when I'm in those situations I won those exchanges, or vice versa, where I get caught with something I thought he wasn't good at. So for me, I just worry about what I need to work on and I go in believing in my skills, as opposed to believing in his.”

It’s a sentiment most fighters over 35 years of age have learned, and it is this experience that has prolonged the careers of many mixed martial artists. Clements elaborates.

“I think people have finally realized that training camp is not the time to increase your skill,” he said. “Training camps are for getting in shape to go to war for three to five rounds, depending on the fight. So many fighters now understand they don't need to do the extreme sparring that causes damage to the body. Working on your fitness is the main point of training camp, and maybe fine tuning the things that already make you successful. I've been a lot smarter as I've gotten older.”

All fighters react to getting older differently. Clements’ secret? He thinks he’s on to something that hasn’t really been explored as an anti-aging device.

“I brought in a stretching therapist, and it's kept me really healthy,” he said. “I feel looser than I normally do before a fight. There's not that tightness in my muscles and joints like in other camps. I feel like I've lost a few years off me, like I'm in my late 20s.”

It remains to be seen if the stretching will make a difference come Friday night, but if it does, perhaps Clements will wish he discovered stretching therapy years ago. After all, his career has been plagued with injuries.

In his last fight, he lost by way of KO against Stephen “Wonderboy” Thomson, but he tore his ACL while warming up backstage for the fight.

“I was very disappointed because I didn't get to fight at my level,” he says of that UFC 165 performance. “The plan was to take Wonderboy down, but obviously with the injury I wasn't able to execute. Anytime I had to push off my leg it hurt, so I was in a panic the entire fight. I was really disappointed with the way it played it out. It took a long time to heal because I had to come back to training and then I re-injured it, and I had a son born in January of this year as well, and it was really hard to focus on my rehab.”

Feeling ten years younger is a good start going into his 18th pro fight.  It also helps that he believes he’s in a good position to finally make a run in the division.

“Ever since Georges St-Pierre left, the dynamic of the welterweight division has changed a lot. There's a big pool of guys that on any given night can win, and it's not like there's a dominant one or two people who are beating everyone up all the time. I feel like everyone in the division is a contender at any point now.”

As a Taekwondo specialist, Clements is well-versed in the stand-up game. The Korean art is heavy on baiting and countering, and while “The Menace” feels like it has been a good base for his fight career, he also says there is no right base for success in mixed martial arts.

“I find my Taekwondo makes me quicker on my feet, and I have a good read on people because of all those years in Taekwondo,” he said. “I feel like I know when they're about to attack and I also feel like I can counter faster than other fighters. But here's how I feel about mixed martial arts. If someone tells me they're training boxing, I tell them they're stupid. If people train kickboxing, I tell them they're stupid. You can't train one sport and expect it to work in another sport. Boxing works great if you're boxing. Karate works great in karate. Muay Thai works great against Muay Thai. MMA is a completely different animal. The defenses aren't the same, the ranges aren't the same. The glove sizes are different. I think this sport is evolving and people are learning that there are different ways of succeeding. In MMA you can create and be very artistic in the way you fight. There's no wrong way to hit somebody.”

And while Chris was never really a student of the late Canadian trainer Shawn Tompkins, he will always say he is a Team Tompkins fighter, as the two were close friends. Tompkins, who famously coached Sam Stout, Mark Hominick, Randy Couture and Vitor Belfort, died a little over three years ago from an enlarged heart.

“Shawn had a way of communicating with every person,” Clements says. “He had a way of making you feel comfortable in knowing exactly what you had to do come fight night. Shawn Tompkins is the closest thing Canada has as far as a pioneering MMA coach goes. He was a good friend to pretty much every single fighter in Canada as well, so while the sport moves on without Shawn, the sport did lose a great coach and a great friend.”