Chris Clements - Happy to Be Here, but Even Happier to Stay

"When I found out I was fighting Matt Riddle, I was pretty happy because
he’s one of those guys that fights like I do. He’s got a smile on his
face from start to finish." - Chris Clements 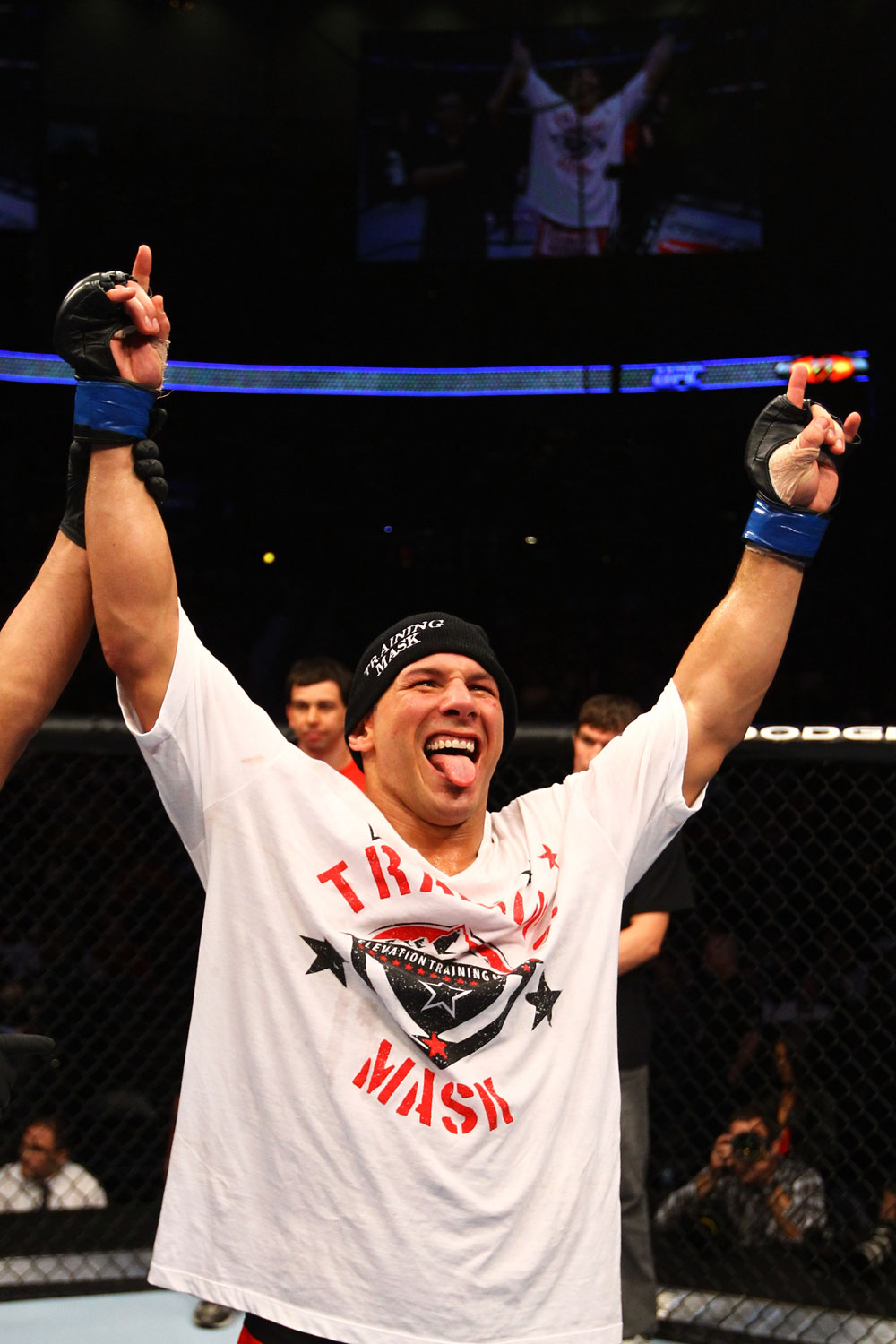 As soon as he said that he wasn’t too happy with his three second knockout of Lautaro Tucas in May of 2006, you could put Chris Clements in the ‘fighters are just like everybody else, but not really’ category. Because really, who wouldn’t be ecstatic over winning a fight in three seconds?

“At first I was mad because it was my first fight at 170, and I went through hell to make weight,” he laughs, also noting that some family and friends drove eight hours to see him compete in his first TKO bout in Montreal. “And then I didn’t even get to fight really. So at first I was mad, but then when I found out it was the world record at the time, that kinda changed things around for me.”

So would it be too surprising that after going the distance for the first time in his 15 fight pro mixed martial arts career against Keith Wisniewski in his UFC debut, that Clements wasn’t too disappointed to see his knockout streak end?

“I was kinda happy about it in some ways,” said Clements of his hard-fought three round split decision win. “I waited a long time to get my fight in the UFC, so I got three rounds to enjoy it instead of just going in and getting a quick knockout.”

The great thing about all this is that the 36-year old native of Chatham, Ontario, Canada is dead serious when he says all these things. For all those fighters who say they love the sport and love competing just for the cameras, Clements really means it, right down to the grin that’s usually spread across his face from the time he leaves the locker room until it’s time to walk back. Fighting for the love of the game? Yeah, that’s Chris Clements.

“It took me a long road to get there, and if you watch my last fight and see me go to the cage I had a smile on my face from start to finish pretty much, and I was just happy to be there,” he said. “I’m living my dream come true basically.”

A late starter at 26, Clements nonetheless came to mixed martial arts with plenty of experience and knowledge of martial arts and fighting.

“It wasn’t like I was starting new, because I had already taken Taekwondo for numerous years, and boxing and kickboxing,” he said. “I was kind of self-taught a lot because MMA wasn’t around back when I was growing up. I would have done it back then if I could have, but I had been training martial arts and studying different kinds of fighting, and even hockey fights, years before the UFC even came around.”

Plus, he had a couple more advantages on his side, the first was that since he was starting out as an adult, he had a bit more maturity than your typical 19 or 20-year old athlete, whose post-fight ritual doesn’t involve resting for a day or two and getting back in the gym, but finding the nearest after party and making it last for a week or two. Clements agrees – to an extent.

“I think my maturity level and way of thinking helped out,” he said. “Still at 26, I took advantage of the after parties and stuff like that (Laughs), but now I’m a married man with a baby, and I haven’t been to the bar once since my fight. I didn’t even go celebrate the UFC fight.”

As for his second advantage, Clements brought a heater to the plate that few opponents could handle. That kind of power is something you can’t teach, and he knew it.

“Even before I started training MMA, I knew I was good at it,” he said. “I was naturally good at fighting. Even in Taekwondo, I didn’t even know my first pattern to get my yellow belt, but I could go in there and I could spar and compete with black belts from Day One pretty much. And boxing was the same way. I could walk into a boxing gym and box with a pro boxer. It was just something I naturally could do and I was always good at it. I don’t remember days going by, even when I was working in a factory, that I wasn’t punching a box. (Laughs) It was something I really enjoyed doing.”

Clements soon moved on from boxes to real-life opponents, but after a strong 5-1 start to his career, losses in three of four fights from 2007 to 2010 (albeit to quality foes Rory Markham, Jesse Bongfeldt, and John Alessio), coupled with his advancing age and a series of injuries, had him thinking that he was never going to make it to the UFC.

“I knew I belonged there, but I had a lot of doubts along the way that it was ever gonna happen for me, especially after I started getting up there in age at 36,” he said. “Before I fought Jonathan Goulet, I thought about actually retiring a couple times just due to injuries and stuff, and I was coming off a loss to Alessio, so I was kinda curious about where it was gonna go from there.”

But with his second round knockout of Goulet in November of 2010, he got the spark he needed to continue, and with his wife and family in his corner, he soldiered on, knowing that a good winning streak could get him a call from the UFC, while one loss would shatter those dreams, most likely forever.

“After I beat Goulet, I thought maybe I’ll give it one last run. But for every fight after Goulet though, I was the most nervous I had ever been in my life because I knew if I lost to any of them then it was never gonna happen for me.”

But following a third round TKO of UFC vet Rich Clementi in December of 2011, his fourth in a row, “The Menace” got the call, and he made the most of his shot by beating Wisniewski. Next up for Clements was supposed to be Afghan knockout artist Siyar Bahadurzada, but when “The Great” went down due to injury, it was former Ultimate Fighter star Matt Riddle who got the call, and the Canadian is happy with his UFC 149 matchup.

“I was pretty happy actually,” said Clements. “I liked the idea of fighting Siyar, I thought it was a great matchup for me, and I think it would have been a very entertaining fight, and one of us was gonna go to sleep for sure. If not, we were gonna win Fight of the Night. So I was looking forward to that, and plus, he’s ranked quite a ways up there and it would have given me a big jump. But when I found out I was fighting Matt Riddle, I was pretty happy because he’s one of those guys that fights like I do. He’s got a smile on his face from start to finish, winning or losing, he just enjoys what he does and he knows how to make a show out of it. And that’s a lot like me. And at the same time, I’ve always wanted to punch Matt Riddle in the face. (Laughs) He seems like a good guy and I’m sure I can have fun hanging out with him and I have nothing against him, but for a guy like me who took 10 years to get to the UFC and had to go through the ropes to get there and never thought I was gonna get there, to see a guy like him who has never fought anywhere else but the UFC, I’ve always wanted to give him a good shot in the mouth for that.”

Clements laughs, knowing how that sounds, but he’s quick to admit that Riddle did what any other fighter would have done in a similar situation.

“It’s not his fault. Any fighter in their right mind would have jumped at that opportunity too and took advantage of it like he did. It’s just I’m one of those guys who had to take a ten year road to get there.”

In other words, after years of paying his dues, he’s ready to prove that he belongs here and that all the work wasn’t in vain. So it doesn’t really matter whether it’s Riddle, Bahadurzada, or any other 170 pounder in front of him, Chris Clements is going to fight with a fury to win, albeit a smiling fury.

“I’m just looking at having good fights and letting the world see what I can do,” he said. “I still think the best career in UFC history pretty much is Chris Lytle. He had one of the best careers out there for a guy who never became a champion. He had a 50-50 record but it doesn’t matter – he’s that guy that people always wanted to see fight. And that’s what I strive to do, just make people happy and want to watch me fight again.”