"I finally think I have my training camp in line for this fight and I’m
feeling prepared. There is pressure for this fight, but it is there for
every fight." - Chris Cariaso 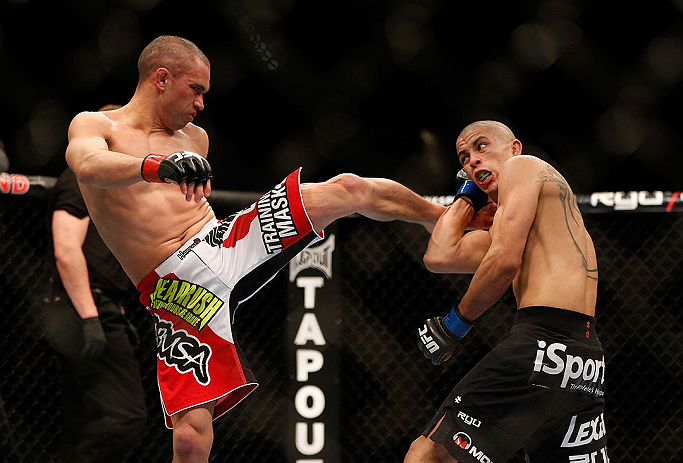 Every time a fighter steps out into the Octagon, another career opportunity is presented.

Whether that step is a jump to title contention, righting the ship to get back on track, or turning a corner where progress is concerned, each fight is a chance to move forward. Yet not every effort produces the desired results, and some contests carry a different weight of urgency.

For veteran Chris Cariaso, the steps traveled throughout his seven years as a professional mixed martial artist have brought him to an interesting place. Over the course of his career, the Tucson-based fighter has proven to be one of the scrappiest competitors battling in the lighter weight classes, and his resume is lined with clashes against the best of the best.

The 32-year-old has collected wins over opponents of the gritty variety like Takeya Mizugaki and Vaughan Lee, and three of his five career losses have come at the hands of current champions or former title challengers. Experience of this nature has shown Cariaso that he belongs in the cage with the best fighters in the sport, but coming up short in big fights has kept him on the outside looking in at the upper-tiers of the divisions he’s competed in.

If that scenario doesn’t create a sense of urgency for Cariaso at this point in his career, the fact he’s facing back-to-back losses in recent showings certainly does. Had a few things played out differently, Cariaso could very well be in title contention at 125 pounds, but after dropping bouts to former No. 1 contender John Moraga and Jussier Formiga, “Kamikaze” is now staring down a much different reality.

He understands the pressure is on heading into his bout against Iliarde Santos at UFC Fight Night on October 9th. But rather than see the negative hovering of a two-fight skid, Cariaso chooses to see the fight as the perfect opportunity to turn things around.

“It’s a back up against the wall kind of deal,” Cariaso said. “That’s as plain and simple as it is. I’m coming off two losses - I realize that - but now I have to go out there and prove what I was doing in the 135-pound division - putting together runs like three wins in a row - and get back into that win column with this fight.

“I finally think I have my training camp in line for this fight and I’m feeling prepared. There is pressure for this fight, but it is there for every fight. There is a guy standing in front of me trying to kick my ass. There is really no extra pressure there, and me being prepared makes me feel ready to go.”

With Cariaso’s love for throwing down when the cage door closes, he’ll face an opponent with a similar taste for action in Santos. The Brazilian made his flyweight debut against top-ranked flyweight Ian McCall at UFC 163 back in August, in a dust up that resulted in Fight of the Night bonuses for both men.

While Santos may have been bested by “Uncle Creepy” in Rio de Janeiro, Cariaso saw the fire he brought into the Octagon and it has him ready for fireworks on Wednesday.

“I think it’s a great matchup,” Cariaso said. “I’m finally going to face someone who wants to stand up and fight me. I’m definitely excited and can’t wait. He brings a mindset to the table that he’s going to walk forward and hunt you down. He’s a strong guy but I was always the smallest guy fighting at 135 pounds. We are both going to be 125-pounds going into the cage and I’m not worried about him overpowering me.

Despite the fact Cariaso is on a two-fight skid, the current landscape of the flyweight division is such that the top fighters are only a win or two away from getting back into the hunt for title contention. The 125-pound weight class is still in relative infancy, and the lack of depth in the ranks creates an interesting opportunity for fighters to move up in rapid fashion and elevate their profiles as the division itself begins to rise in recognition with the UFC fan base.

And the latter is a long time coming in the eyes of the fighters involved. Cariaso and his peers have spent years battling one another outside the limelight of the sport’s biggest stage, but that has all changed with the UFC creating and showcasing the lighter weight classes. As a veteran of the circuit, Cariaso couldn’t be happier with the current conditions, and he is ready to make his mark on the 125-pound collective.

“It’s finally happening,” he said. “I’m excited to see the growth of it. Last year, they weren’t giving us any love, but this year, it’s definitely starting to get recognized in the UFC. It’s great to see the lighter weight guys headlining shows and everything. The lighter guys put on some of the best fights and bring the most action inside the cage. It’s exciting to see that we are finally getting that recognition.

“A win in this fight definitely puts me back in the mix,” Cariaso added in conclusion. “He is coming off a loss to Ian McCall, who is ranked at the top of the division. I’m ranked in the top 10 and beating Santos will put me up there and get me fights with guys who have already fought for the title and been in contention.”