“The UFC did a great job matching this fight up, and it’s definitely going to be exciting. We both like to stand up and I’m definitely prepared for him." - Chris Cariaso 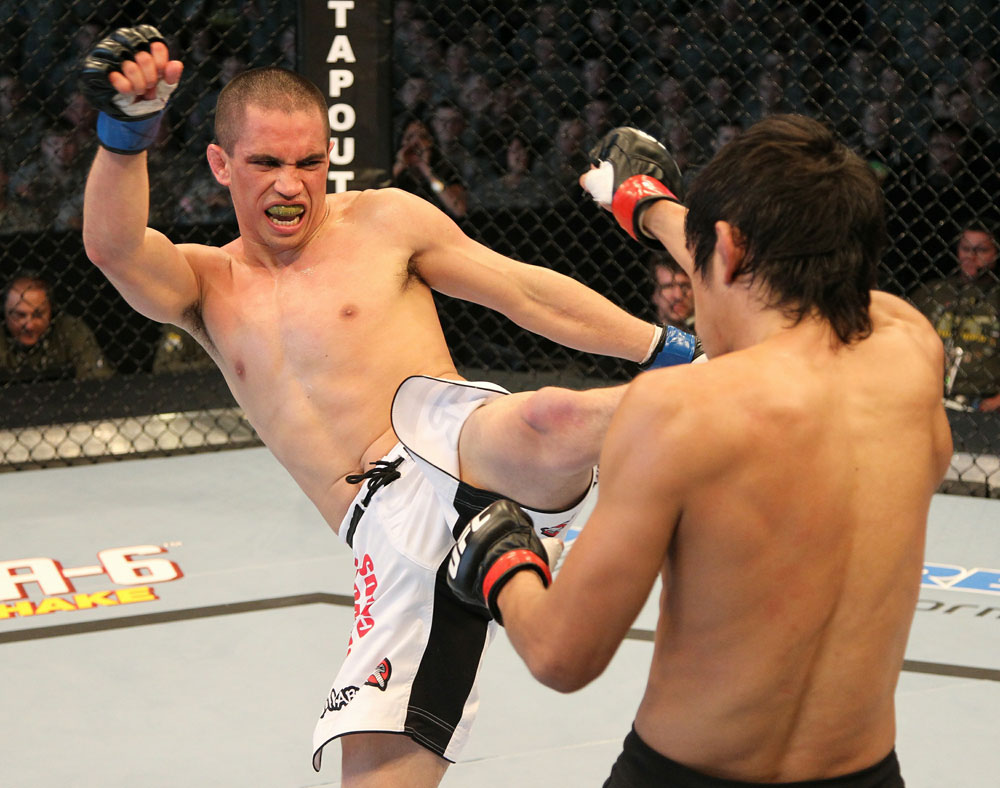 The sport of mixed martial arts has exploded globally, but in certain regional areas the sport has always been and always will be a hotbed.  In the United States, no state more exemplifies this fact than California.  Home and birthplace of UFC legends like Chuck Liddell and Tito Ortiz, the state is filled with talent and professional hopefuls looking to climb their way up the arduous ranks of the MMA elite.

One such competitor is San Francisco-based fighter Chris Cariaso.  Having trained extensively in Muay Thai and owning a gym with a world Muay Thai champion, the Ralph Gracie jiu-jitsu product has become one of California’s standout athletes and businessmen.

“I started out doing martial arts when I was five years old and I’ve been doing it my whole life,” said Cariaso. “I always envisioned owning a martial arts gym.  When I was 22, I took the opportunity to start one up and I was able to open one up.”

From his earliest days, Cariaso experienced success as a professional fighter.   Starting out in 2006, Cariaso went on a six fight unbeaten streak, tearing up the northern California fight scene.  He didn’t lose in his first two years of professional competition, scoring five unanimous decisions and a head kick knockout.

“I attribute my early success to my standup training; I come from a Muay Thai background,” said Cariaso.  “I’ve been training a long time, since I was 11 years old…I actually had my first fight when I was 11 years old, doing Muay Thai. Once I made that step, and made my debut in mixed martial arts, it was an easy transition.”

Since that transition, Cariaso has gone on to produce a record of 11-2 and has compiled another distinction of note, competing in practically every major MMA organization except for PRIDE.  It is a testament to his veteran stature, and Cariaso has accepted these experiences humbly.

“I think it’s really exciting and I feel blessed that I’ve had the opportunity to be able to fight in all those organizations.  Being in the UFC has always been a dream of mine, and I felt like fighting in those promotions were steps for me to get to where I am today.  Going into the WEC was my UFC and just making it to that level was a dream of mine. Just making it there, and now that the UFC has bantamweights in it, it’s a beautiful thing and here I am in the UFC…it just couldn’t be a better thing.”

In his first outing in the UFC, Cariaso took on Will Campuzano at UFC: Fight For The Troops 2 at Fort Hood.  The three round war saw Cariaso emerge as the victor via unanimous decision, solidifying his entrance onto the biggest MMA stage in the world.

“My first experience fighting in the UFC was definitely very stressful,” said Cariaso.  “I didn’t want to make a mistake, and coming off a loss in the WEC (against Renan Barao), just made it all the more stressful. I wanted to go out there and prove that I wanted to be there, but now I got that win under my belt and I’m definitely going to shine here at UFC 130.”

Cariaso’s next opponent is fast rising former WEC competitor Michael McDonald.  McDonald is riding a five fight winning streak and the distinction of having his first UFC fight yield Fight of the Night honors against Edwin Figueroa at UFC Fight Night: Nogueria vs. Davis.  The fight is a great challenge that Cariaso is definitely game for, and by the look of McDonald’s current record, a win for Cariaso could potentially derail the fast rise McDonald seems to be logically making towards a title shot.  Ironically, McDonald is also a northern California representative.

“I think it’s a great fight,” said Cariaso. “The UFC did a great job matching this fight up, and it’s definitely going to be exciting. We both like to stand up and I’m definitely prepared for him. Pretty much everybody I’ve fought is a tall, right-handed fighter and I don’t think that he’s not going to show me anything that I haven’t seen before.”

Looking for a change of pace for this fight, Cariaso took the journey north for a new training regimen and new training partners.

“I opened my training camp a whole bunch. I went and spent a little time in Montreal and went over to the Tristar gym. And I got some work up there for a little bit. I kind of opened up my camp back home too; I’ve been working with top level pro boxers and top level pro Muay Thai fighters, and I’m kind of diversifying my camp a whole bunch more, and breaking out of that norm that I’ve been used to, just to elevate that game.”

As the day draws near to the matchup between two rising stars within the new UFC bantamweight ranks, it is a sign of the bright future of the division.  What fans can expect is the typical fast-paced action of the lighter weight classes and the march of these California kids, who make up a large percentage of the division, towards Octagon glory.