Chris Camozzi: The Long Shot Looking to Seize the Moment

"Where most fighters break, I get better. I’m the kind
of athlete or person when things get hard I push myself even more." - Chris Camozzi 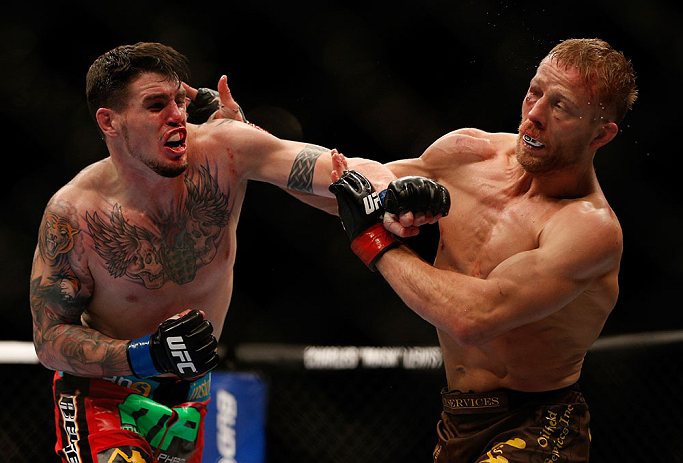 Mixed martial arts may be rising into the mainstream consciousness of professional athletics, but there is still something primal about fighting. When two competitors are locked inside the Octagon, looking to impose their respective wills upon one another, there comes a moment where a fighter is pushed to their limit. Once at their breaking point, a decision has to be made to either submit to the pressure or reach down deeper to find that extra grit to go on.

Where MMA is filled with athletes whose toughness will never be brought into question, there is still that unique brand of fighter who finds comfort living in the fires of combat. It is this group of competitors who refuse to be broken. No matter how far the scales have tipped against them, the desire to fight not only remains, but becomes amplified. They will give every ounce of blood, sweat, and bone to find victory, and of this sacred fraternity, UFC middleweight Chris Camozzi is most certainly a member.

The scrappy Colorado-based fighter is well versed in the art of the comeback. Following a slow start to his UFC career coming off a brief stint on the 11th season of The Ultimate Fighter, Camozzi was released from the promotion after suffering a loss to housemate Kyle Noke at UFC 127. For a passionate competitor the likes of Camozzi, handling a defeat is difficult enough, but when he was cut from the roster of the biggest organization in mixed martial arts; the ingrained instinct to not only step up – but push to greater heights – began to pulse through the 26-year-old’s veins.

After earning a victory over veteran Joey Villasenor on the regional circuit, Camozzi was brought back into the UFC fold to face newcomer Francis Carmont at UFC 137. The Factory X-trained fighter ultimately came up short on the judges’ score cards, but not after giving Carmont all he could handle over the course of the three round tilt. While Camozzi may have stumbled in his return, his second chance wasn’t an opportunity to be wasted, and he flipped the switch on his career, rattling off four consecutive victories in the middleweight division.

Where Camozzi’s name once sat a loss away from the chopping block, now the gritty Muay Thai based fighter is on the cusp of breaking into the Top 10 in the 185-pound weight class. It has been a rewarding journey for Camozzi, coming from the shadows of obscurity to reaching the level where the best fighters in the world compete. That being said, it wouldn’t have been possible based on skill alone, and he firmly believes he possesses something other fighters lack when the pressure is on.

“I don’t know exactly why that is other than the fact I’m super-competitive and hate to lose at anything. I train so hard and just want to win so badly. I think I’m mentally much stronger than a lot of other fighters.”

While an iron will is an admirable quality to possess, for Camozzi it runs neck-and-neck with a heavy-handed style of self-critique. For the amount of work he invests inside the gym, Camozzi expects the very best out of himself when the cage door closes. When the finished product isn’t up to his liking, he wants to get back to work as quickly as possible in order to erase the previous chapter.

Case in point: Despite defeating Nick Ring via unanimous decision at UFC 158, Camozzi was unhappy with his performance and wanted to get back into the Octagon in quick fashion. When the opportunity to fill in for an injured C.B. Dollaway and face Cezar Ferreira arose, there was no hesitation on Camozzi’s part to accept the bout.

Two weeks after taking the fight, Ferreira was also bitten by the injury bug and promptly replaced by veteran Rafael Natal. With Natal stepping in, it was Camozzi’s hope that a victory over the Brazilian would open the doors to the division’s best and produce a top 10 ranked opponent in his next outing. In another unexpected turn, another contender on the rise, Costa Philippou, was forced out of his co-main event slot against Ronald “Jacare” Souza, and once again opportunity came knocking for Camozzi.

But that is how chances rise and fall in the fight game – and it is something Camozzi has come to embrace wholeheartedly. Now instead of facing an opponent he hopes will get him to the next level, a bout with Jacare definitively holds the keys to the upper tier of the middleweight division. That being said, Camozzi is an underdog going into the bout with the jiu-jitsu ace, but being the long shot is just the way he likes it.

“I have everything to gain and nothing to lose from this fight,” Camozzi said. “I love being put in those situations where nobody expects me to win. Those are the situations I thrive on. I have nothing to lose and all the pressure is on Jacare. He has the big name and a trophy case filled with accomplishments. I’m just a last-minute replacement. From what I’m reading online, nobody is giving me a chance in this fight, which is perfect. You can look back through history and see all the people no one gave a chance to who stepped up to capture the moment and rose to the occasion. This is that type of scenario for me and exactly the type of situation I thrive in.

“It’s extremely motivating. Getting pumped up for a fight has never been a problem for me, but getting a big opportunity like this has given me a whole new boost of energy.

“It was kind of crazy how everything went down. I was training when I got the call asking if I wanted the opportunity to fight Jacare and obviously I did. It’s the best case scenario if you really think about it. At first I started out by taking a short notice fight stepping in for C.B. Dollaway when he got hurt. Then the opponent gets switched and now I’m fighting a top 10 ranked fighter in Jacare in the co-main event. I couldn’t ask for a better situation.

“I’m looking at Jacare as a bigger, stronger, more accomplished version of [Rafael] Natal,” Camozzi added. “Nothing against Natal, but Jacare is one of “the” very best on the ground – let’s face it. As far as I’m concerned, it’s just like Costa Philippou said where  there is no amount of training I’m going to be able to do on the ground that will put me anywhere near his level. But this is MMA and there are ways around that. I don’t have to have a grappling match with him.

“I need to impose my will and play my game. I can’t give him too much credit. I think when a lot of guys faced named opponents they come in there nervous and end up giving far too much respect. They give too much leniency and that plays right into their opponent’s game. I’m going in there with the mindset that he is just another fighter. You take away the name and it’s just another human being in the cage with you that can fight. I just need to approach the fight that way and it’s a winnable fight for me.”

With the change of opponent comes an entire change of scenery. Where Camozzi was preparing to face a solid grappler with a grinding style, he is now facing perhaps the very definition of the category. Souza is a multi-time world jiu-jitsu champion who has also found his stride inside the cage, winning seven of his last eight outings. The 33-year-old has proven to be an absolute nightmare when the action hits the canvas, but their tilt is a mixed martial arts fight, and Camozzi has several advantages of his own.

“In Colorado we are at altitude and I train to the point of exhaustion,” Camozzi said. “I go through sparring rounds where I don’t feel like I can go another second but I press on and keep going. I mentally prepare myself because I know my body will go forever. It’s all mental. The human body will run until you drop dead and there is never a point where you are too tired to win. I think a lot of it just being mentally strong and preparing myself for how the fight can go down.

“I train at a mile high in the altitude and my cardio is never something I’m worried about. I train for five round fights even though I’m only fighting three. Cardio is always going to be on my side. I’m not going to Brazil early. I’m going the week of the fight. I have made the trip before and I know the travel won’t bother me, but the advantage of going the week of the fight is so that I won’t lose the advantage of training at altitude. If I go there and acclimate a few weeks early then I lose the advantage of having trained at altitude.”

Going into a fight few are giving him a chance to win, against an opponent known for smothering and breaking his opponent’s will; there is a good chance Camozzi’s back will be put to the wall this Saturday in Brazil. Souza is pure technique and instinct. As soon as the action hits the canvas – which it likely will – the clock on Camozzi’s supposed demise will begin to tick away.

But it is in these moments of pressure when the surging prospect finds the very best within. Being pushed to the breaking point certainly sounds unenviable, but Camozzi has toed the line in the past and knows how he is capable of responding.  He knows he can survive in deep water and plans to see if Souza can do the same.

“When it gets tough, I have to break through that to find victory,” Camozzi said. “If I see any sign of weakness from my opponent – maybe he takes a deep breath or he gets a step slower – it takes away any of the tiredness I’m feeling and it motivates me beyond belief. When I see the other guy weakening, I know the finish is possible and it makes me come at them even harder.